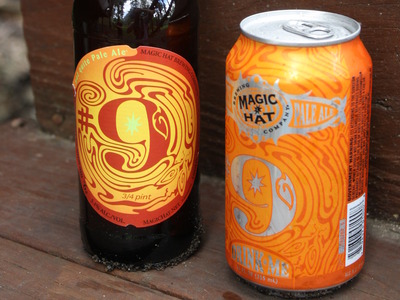 Magic Hat in a Can: A New Product With the Same Name
Smigoversen
February 21, 2014

I recently moved to Brooklyn. What would have been a huge transition to begin with has been even harder with my inability to find 12-packs of bottles. I haven’t found a single one yet and it’s breaking my heart. The organic grocery store near my apartment has twelves of Magic Hat #9, Sierra Nevada Pale Ale, and Pabst Blue Ribbon cans. It’s either that or a sixer of a fairly large selection of beers. It’s not exactly SOPHIE’S CHOICE, but I’m unhappy with this situation nonetheless.

Last week, I forsook the sixers for the first time and picked up the case of #9 cans. I then proceeded to casually drink 9 of them as I went about the rest of my evening. I made a pot of chili, ate a significant amount of that chili, took a dump 20 or so minutes later, and watched X-MEN: FIRST CLASS (more on that later). Somewhere in the middle of Prof. X and Magneto’s recruitment trip, I had a revelation. My glass was getting empty way, way, way too quickly. You might be wondering why that is an issue. I am happy to bring you up to speed. I enjoy drinking beer. I enjoy drinking lots of beers. But I truly loathe getting up to get another one. I’m never happier than when someone is bringing me beers.

Why was I drinking so quickly? Magic Hat #9 in a can is not the same thing as Magic Hat #9 in a bottle. There’s some tangible quality to the beer that results in a lower quality drink. And I think that is by design.

Magic Hat #9 in my mind is synonymous with outdoor concerts full of white people and as a change of pace from Keystone or Coors for white people when they want to be “classy”. You don’t get that kind of perception by not being available at all locations these activities take place. I think that Magic Hat is everywhere because it really is everywhere. Magic Hat is not some dinky craft brewery, it’s owned by a major corporation along with Labatt, Pyramid, and Genesee. They have the technology and the desire to engineer a beer that is ideal for the activities listed above.

Let’s start with a subtle but super important aspect of #9. There are only 165 calories in a 12 oz serving of Magic Hat #9. That means you can drink a whole bunch of these mildly bad boys without starting to feel full. That’s how they keep you on the hook and end up drinking 9 beers like I did. On top of being a very light beer, it doesn’t really taste like anything. You can take as big a sip as you want, but you’re never going to be able to get your tongue on a strong flavor. After a can of #9, you’re vaguely aware that what you drank was beer but you wouldn’t bet any money on it.

So what you’re left with is a midly refreshing beverage with no taste and doesn’t make you full and you end up with a mild buzz. That sounds like only high schoolers sneaking $5 vodka in water bottles are going to be throwing up and all the adults will casually drinking while kids with IDs try to do the latter before settling for the former.

If you’ll excuse me, I need to get my tinfoil hat made out of used Magic Hat #9 cans before I wrap up my argument.

Okay, with all this in mind, Magic Hat #9 tastes great on tap and in bottles. I always enjoy their seasonal variety packs. I’m just saying that the brewers have decided to make Bud Light Platinum and put it in cans that look like they could be for a psychedelic orange soda and call it Magic Hat #9 in a can. And it all comes back to a secret agreement made in the hills of Vermont between the leaders of the great jam bands and the brewery.

If you give Smigoversen a list of things to remember, he will forget exactly one thing every time.

FORUM
Almost Getting Arrested on My 21st Birthday
Jimmy Fraturday
WillyD
Magic Hat #9. I'm going to have to try it.
The Tabro
The only thing that makes beer bottles are good for is figuring out inventive ways to get the cap off. Otherwise beer in cans just makes more sense
Beer Musings