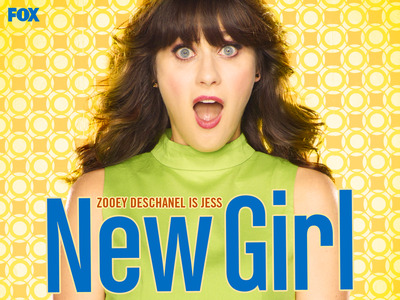 This week's rant will reveal the shocking truth behind the show New Girl. While we all get a kick out of Zooey Deschanel’s quirky antics, it doesn’t make up for the fact that the entire show is complete and utter bullshit. I know this because I have had three boys for roommates... twice. This means that including my two brothers I have shared a bathroom with a total of eight dudes. That’s over a billion pubes cleaned off of toilet seats, so yeah, I’m a fucking expert on this. New Girl started to get popular during my most recent dude living session and my chick friends would say “OMG Sliz you are totally just like Jess.” Whoever writes this show is out of their element, and here is an insanely incomplete list that explains why.

Say goodbye to your BFF TV, because you're done watching it. Dudes always have the best TV’s because they splurge on those super fancy hi-def ones that chicks are too cheap to pay for. They will pay a butt-ton of money for NFL Redzone (still don’t know exactly what it is) but they refuse to pay for HBO or any other channel that provides girl-friendly porn. I don’t know about you assholes but I want to watch Game of Thrones, not New York sports teams attempt to tread water. Oh wait… NONE OF THIS MATTERS BECAUSE I NEVER FUCKING USED THE TV! Do you think any of those eight dudes gave a flying fuck about me wanting to watch Downton Abbey, Hart of Dixie, or anything else that requires a vagina? I lost count the number of times a dude walked in and just turned off whatever addicting girly sitcom I was watching for yet another round of Skyrim. Not to mention there is always another game on… it never ends! Oh how I envy Jess being able to watch DIRTY DANCING multiple times a day, because that would have been fucking epic.

No dude on the planet deals with female emotion unless they are getting sex in return. This is a fact unless you’re a virgin for some weird religious reasons. The character Jess is literally exploding with emotion, tears, and unsolvable problems. She also can’t hold her booze, which makes these three other problems way worse. If I came home after having a stress filled day and maybe a tiny bit emotional do you think someone asked how I was doing? HA! YEAH RIGHT!

I've been listening to you guys bitch about your love lives louder than sorority girls on a Starbucks run since the first time someone touched your boner. And believe it or not, I don’t want to hear you complain about your girlfriends while we watch Big Sausage Pizza and chug Busch Light at 2:00 in the afternoon. But female emotions don’t mean jack shit when you live with dudes. End of story.

Why is everyone wearing pants? No bartender who puts butter on bacon wears jeans in the light of day around the house. Plus the best part of living with dudes is disregarding all social rules regarding clothing because all you dudes have been getting away with constant partial nudity ever since boxer shorts were invented. The New Girl dudes especially are wearing too much clothing because two of them don’t have real jobs for the majority of the show! This literally makes no sense because pants suck balls. So do shirts in the summer, which is why "Suns Out Guns Out" was invented. In my time living with dudes I took full advantage of this perk. Meaning when I came home the pants and bra came flying off! For further advice on this subject I recommend finding a pair of jelly sandals, a flannel robe, and fixing yourself a white Russian, because then you will learn what it means to be truly comfortable. If you didn’t get that reference then stop reading because I hate you and you’re worthless.

While there are many advantages to living with dudes (which I’ll save for another time), New Girl does not show any of the realities. So the next time a girl says she could totally live with a bunch of dudes, make sure to tell her to stop watching New Girl and see if she is prepared to unclog drains and have everything she owns smell like sweaty balls.

Sliz Tanq came into her own after winning an all-female beer chugging competition on top of a bar. Her daily whining and ranting doesn't explain how she got stuck hanging out with so many dudes.