Who Are You And What Have You Done With Steve?
DICK BLAST - STUFF WE HATE 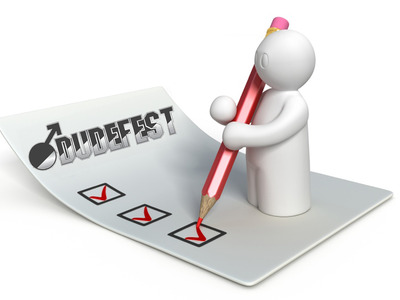 Do yourselves all a favor and actually read this rant. I don't mean skim through it like all the other bullshit that crosses your computer everyday. I want you to physically turn off the porn and give me your full attention because if you follow my advice you might actually get laid in real life. Remember what that's like? Here is a list of three things that every dude should avoid saying to the entire female race. These things are just the tip of the mother fucking iceberg that holds all the dumbass shit you dudes say to girls on a daily basis. I know you boys are a little slow so we are going to start small and eventually move up to never commenting on my wine intake. Actually I take that back, I wouldn't be averaging a bottle a night if you dudes weren't pissing me off in the first place!

1. “Tanning is really bad for you”

I would like to start by asking a simple question, why do you give a flying fuck? I don’t know if you dudes have used that thing called the Internet lately but just about everything we eat/drink/do to our bodies is bad for us. So why is sitting my naked ass under light bulbs for 10 minutes a week something that you feel the need to criticize instead of more deserving candidates like the amount of Everclear I ingested last weekend? I have sat back and watched a terrifying amount of you dudes demolish a mountain of nose drugs without saying shit! So back the fuck up on my tanning sessions unless you want to see what actual real-life seasonal depression looks like in February. FYI it’s not pretty and you won’t get laid.

This has nothing to do with you dudes refusing to face a cold, harsh, and dark reality. I could care less about whatever lies you want to tell yourselves… This is all about you assholes constantly talking about bodily functions! Do dudes not understand what a bathroom door is? If it is shut and I am clearly inside, it should indicate that I closed the door for a reason and I do not want to have a conversation with you through the door! Not sure if any of you dingbats noticed but we girls don’t even talk about pooping… EVER! Under no circumstances do we discuss it in our free time because we have better things to do, like go tanning. You dudes hold all the cards on this one, so don’t bring it up and I won’t give you a graphic image of me sitting on the can reading Calvin and Hobbes.

If one of you sons of bitches says this to me one more time I’m gonna come at you like a spider monkey! I’M GONNA SCISSOR-KICK YOU IN THE BACK OF THE HEAD AND GO APESHIT ON YOUR ASS! Aside from the fact that she is Queen B and you should all to be bowing down to her excellence, clearly none of you dudes can see the big picture. Remember that little girl group known as Destiny’s Child? You know, it was the group that stopped recording albums because they won every music award possible? I thought you might. Girls grew up with this pop music sensation by making up dance routines to "Say My Name", "Independent Woman", and "Survivor while" shaking what we clearly didn’t have yet. Those ladies taught us how to stand up for ourselves back when we thought first base was holding hands at the movies and we never forgot it! Now unlike the unfortunate fate of whatever the hell happened to other music from our generation like Britney Spears (seriously it’s just getting sad) our girl Beyoncé has just kept going! It’s cool if she’s not your jam, just keep your filthy opinions to yourself because I don’t want to fucking hear them. Now in the words of Queen B herself “THIS MY SHIT! BOW DOWN BITCHES!”

GUYDE
Dudefest Guyde To: Tinder
Pete Hall
Peaches O'Houlihan
Certified woman here: I would never be caught dead in a tanning booth because skin cancer is very real and very terrifying and I FUCKING HATE BEYONCE. I hate her so much it keeps me up at night sometimes.
Lady Pants
Let's see your certificate.
Peaches O'Houlihan
http://i.imgur.com/jhrn1o6.png
Lady Pants
http://i.imgur.com/PvNJZgI.jpg Respect.
Scrooge
I'm afraid of you
Jimmy Fraturday