Mom Get Out Of My Room I'm Trying To Make A Website God!
SELECTIONS FROM THE DUDEFEST GUYDE 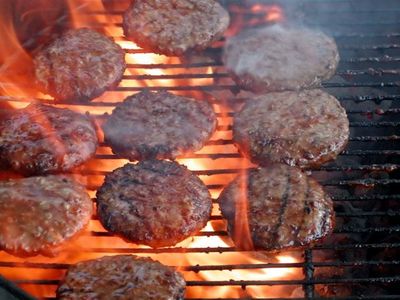 Grilling, the one truly acceptable culinary art for a dude to pursue. Since the dawn of mankind dudes have been grilling. Chicks may have gathered the fruits and vegetables, but they were NOT going anywhere near the primitive fire painstakingly created with two rocks, some kindling and a prayer for the better part of the day. That was the man’s territory*.

Grilling today is a lot more high tech. Which is awesome, because when you get fire and technology and put them together something generally awesome happens. In different parts of the world, the word grilling has many different meanings, and many different, distinct styles. For the purposes of this discussion, we will stick to the meaning in the good ol’ U S of A. When we talk about grilling we mean tossing meat on a gridiron on top of a fire. Sounds easy, but nothing could be further from the truth.

Today we’ll focus on grilling a hamburger (a staple in any dude’s grilling repertoire). You’re going to need to get a good cut of ground beef. Don’t wimp out and grab some Bubba Burgers, you have to establish the quality of your burger from the beginning. Head to the local butcher and watch them grind it before your eyes. Better yet, buy a grinder and move the meat even closer to your grill. The advantages of grinding your own meat are numerous in taste, but the most obvious is that this gives the meat no time to oxidize (turn brown) which will happen as the meat stays out. It may seem pretentious and even downright pompous to go to these lengths but trust me when I say your reputation is riding on the skill of your grilling and you do not want anything standing in the way of glory.

So you’ve got a good cut. It’s time to think about the grill itself. Gas or charcoal? Either way you go, you’re probably going to have a great burger in the end. However, in my opinion the best option is a charcoal grill with a cover. There are downsides: chiefly a lot of prep time and the charcoal can get messy, but the positives vastly overwhelm those negatives. Charcoal gives your meat the smoky flavor that is so desired in grilling. With a gas grill, you won’t get any of that. Just a gasoline flavored burger. Which is not how you impress your friends who have endured your boasting about your grilling skills for the past three weeks. My point is charcoal is the way to go. Of note is that when you utilize a cover on your grill to trap the smoke and continue to give the meat that flavor you have actually moved into the realm of barbeque and smoking which we will not cover here.

Once your burgers are on the grill it’s fairly straightforward. Check them every so often to make sure they’re cooking well. Flip them when the time comes and as soon as they’re done, rush them over to the table to serve them up. The burger should have a browned exterior and be juicy on the inside. Presentation is less important but a good bun and some quality condiments are recommended. Feel free to experiment with anything on top of your burger (especially bacon); as long as the meat is good, it’ll be hard to really fuck it up.

*Dudefest.com has not painstakingly assessed the historical accuracy of this claim.

Matt is busy, so don't bother him.

We're hoping to release that sometime in 2016. Our researchers are currently hard at work getting the information we need to bring you that Guyde.
Jimmy Fraturday

Will there be a follow up Guyde on how to cook cheeseburgers? I like cheeseburgers, but I'm a little lost on the transition from hamburger to cheeseburger.
Guydes