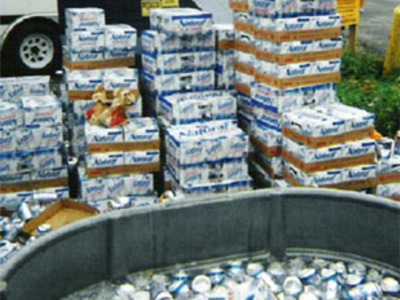 We talk a lot about Craft Beer here in the Booze Department of Dudefest.com. But today we’re going to take a look at the world of national brands that make light beers. The first thing I need to say is that all of the major light beers is that they taste exactly the same. Since they all taste the same, they need to find ways to market themselves as being different from all the other major light beers. (You might remember a similar scenario being solved for Lucky Strike Cigarettes by Dudefest.com Folk Hero Don Draper during an episode of Mad Men)

Just like tables in the cafeteria during middle school, the cool kids got to pick their shtick first. In this metaphor the coolest kid is Budweiser. They decided to advertise themselves as the default beer that regular dudes drink. They want you to imagine a Bud Light every time a movie or TV show doesn’t explicitly specify the brand of beer. Miller Lite has been trying to copy this approach with a slight twist for years, they don’t know how to fucking spell. They only manage to use 3 of the 5 letters in the word light. This is a beer that doesn’t try to be smarter than you. People find that comforting. Those two have forced Coors to get creative and market their beer as a way to make sure your refrigerator is in good working order. Notice how none of these ad strategies are about taste.

For some people (college students), these beers are still too highbrow for them. They want something that barely qualifies as beer. They’re looking for something with a slightly stronger piss taste than your average public pool. They want Keystone Light. When it comes to the shit beers, Keystone Light goes by King Keystone. Thus, just like Coors Light, Natural Light (or Natty) for short had to get fancy. Let’s take a look at some of their innovations in the barely-passable-for-human-consumption-alcoholic-beverages market.

Natty in a Can 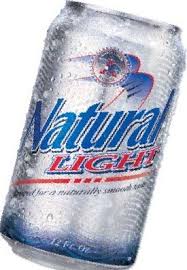 If you’ve ever had a Natty before, this is probably how you drank it. In a can with a design that makes sober people question their decision making. I liken drinking one of these to trying to take the first sip of a really hot cup of coffee. You keep like inching towards tasting it but chickening out. Then eventually you get super close and almost taste it by smelling it. Finally you do taste it but you think you might still be just smelling it because its so hot and you just burned your tongue. Only in this case it’s terrible beer that reminds you vaguely of piss.

Natty in a Bottle 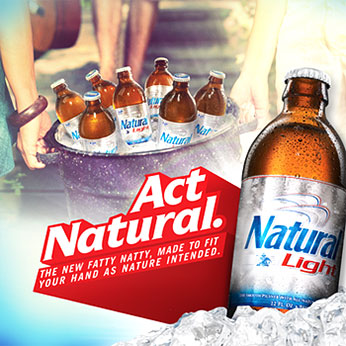 I dub thee the NATTY FATTY

I didn’t think these existed. I’ve never seen one in a store bodega (let’s be real, a proper store wouldn’t sell this trash). I did look at pictures online and was delighted to learn that it comes in a chode bottle. 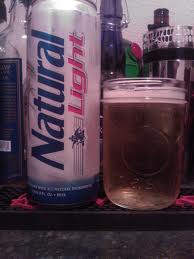 The greatest thing to happen to the shitty beer industry is serving sizes that exceed 12 ounces. That’s just not enough beer to put in one container. I’m getting up way, way, way too often when I’m drinking 12 ouncers. Especially when you consider that 12 ounces doesn’t even have a special name to designate the serving size. You don’t walk up to a bartender and say “Hey can I get a dozen of Natty?” You don’t walk into the store to grab a sixer of twelves. That doesn’t make any fucking sense.

And that’s why you can buy a double beer a.k.a. a tall boy. It’s 24 ounces, unless you’re talking about a Natty Tall Boy (the opposite of the Natty Fatty). These bad boys (and I mean bad like they taste bad) are 25 ounces. Leave it to Natty to turn everything into a dick bottle measuring contest.

If you die after drinking one, your family should be prepared for it to be ruled a suicide.

The men and women at Natural Light were really influenced by Spinal Tap’s amplifiers that don’t stop at 10 and just keep on going to 11. The Natty Tall Boy is already an 11, so they had to develop an amplifier that goes to 12 for Natty Daddy’s. (In this metaphor, the new amplifier is 8% abv instead of 4.2% like regular Natty). And just like before, there are 25 ounces in each can.

I had a run-in with Natty Daddy’s last summer with Kennedy and Ryan Koella. Before I go any further, I should say that Dudefest.com’s Human Stick Figure, Kennedy, is a fucking weirdo. He is a grown-ass man that drinks Natty Daddy’s on purpose. BECAUSE HE LIKES THEM. We were getting together for a centennial celebration and Kennedy told us he had a surprise for us. It turns out that surprise was a case of warm Daddy’s he had brought up from Boston. Our mutual friend Boris Yeltsin (not his real name) said “No! Do not drink those! I had seven of those and FELL DOWN STAIRS!” when he saw us taking the case out of the trunk.

Being the Cheapskate Beer Snob that I am, I took this as a challenge. Not to drink seven, just to not fall down any stairs (challenge barely completed). Here’s an interesting fact about Natty Daddy’s: they taste less awful when they’re super warm from being in the trunk of a car overnight instead of being cold. So I proceeded to slam three of them before my will to live was pummelled out of me and I stopped drinking for the night. I went to make a quick phone call and started conversing with a friend, apparently mid-conversation I forgot who I was talking to and, thinking he was someone else, asked him if he thought his girlfriend was kind of a bitch every time she talked. That went great.

Other things that went great included waking up the next morning. I wasn't hungover at all. I even had a meal only an hour after getting up. I actually thought I had outmaneuvered the booze. This was a great victory. I felt that way until around 4:15 that afternoon when I threw up on a random front lawn.

Smigoversen is ashamed to admit that everything he wrote in this article is 100% true. And if you're reading this, he's really sorry about throwing up on your lawn. Tweet him here.

I love how they advertise without a hint of irony. As if they don't know their "beer" is pure poison.
Jimmy Fraturday