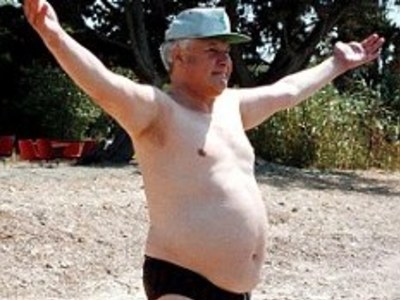 Remember the nuclear staring-contest between the mega-powers USA and USSR, with the uninspired moniker "The Cold War"? Well, if you're older than I am, you might remember a lot of tension between these two sides, and the fact that the US won because, basically, it's more fun to be a Capitalist country. The free market is the best because, you know, dudefest, and also, clearly, no rules.

One person who combined equal parts Capitalist debauchery, corrupt power-grabbing of the later Communist Party, and all-around dudefestery, was Boris Yeltsin. If you would like a bit of Yeltsin Knowledge (or Yeltsinology), continue on. If not, fuck you, continue to the bottom of this article, where you will find the "Best of Yeltsin". 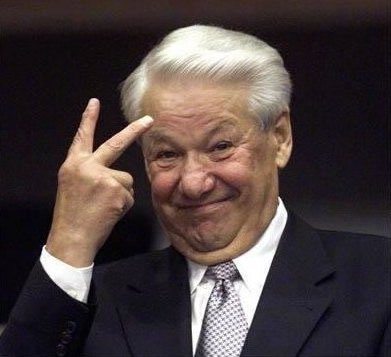 Born to poor parents in East Bumblefuck, Russia in 1931, Boris grew up a true maverick. He lost two of his fingers while experimenting with grenades. He was fond of sports, boxing and wrestling are dudefest examples. Yeltsin even went to school for construction, and wrote his degree paper on "Construction of a Mineshaft". Thrilling, no?

Yeltsin did have a penchant for making the right friends, however, and quickly became involved in politics. Just look at his Yeltsopedia page, he was elected to like 1,067 government positions. He also developed a love for alcohol. While drunk and a part of the Communist Party, he quickly rose up the ranks until he was a member of the Soviet version of a "functioning" senate. One day he realized how disillusioned the central government of the USSR was, criticized then General Secretary Mikhail Gorbachev for making free-market reforms too slowly, and peaced the fuck out. He actually said something like: "Fuck you all, I'ma get wasted." No one had resigned from the Senate before. Anti-Communist Dudefestery.

After being stripped of all titles, Boris spoke out more strongly against the Gorbachev regime, which garnered a massive smear campaign against him. He drunkenly rose against this and eventually, however unlikely, became the President of Russia in the aftermath of the Soviet collapse. He eventually succumbed to his power and poor habits, though: Yeltsin had 47 heart attacks, enraged the Russian populus, ran the Russian economy to the ground (with Western help), TOTALLY took liberties within his office, and left us with Vlad Poo-tin.

The Best of Yeltsin

- In August 1991, Yeltsin gave a soapbox speech that halted a pro-communist coup. But the soapbox was actually a tank. Dudefest.

- In October 1993, after continued political fighting with the Soviet Parliament and losing popular support, Yeltsin lost his last fuck to give. He ordered tanks to shell the parliament building. 140 people die in ensuing street fighting. Horrible, and definitely a tank-tantrum, but pretty dudefest.

- On a September 1995 visit to Washington, Boris is found outside the White House, in his underwear, completely Yeltsined, trying to hail a cab. He was intending to order a pizza, and apparently forgot about delivery AND Digiorno. What's not dudefest about shunning tight-ass politics for a little free time with some pizza?

- November 1996 Yeltsin resurges from quintuple-bypass heart surgery to quell an attempt to impeach him.

- In Stockholm in 1997, Boris gets wasted, almost falls off a stage, and then states that Russia will reduce it's nuclear stockpile by one third. Whoops.

- From 1998 to when he left office (a period of 17 months), Yeltsin fired his entire cabinet, including prime minister, four sepearate times.

- Yeltsin steps down December 31, 1999 because he was apparently afraid of Y2K. Putin is his self-chosen successor. He says "Sorry your dreams never came true".