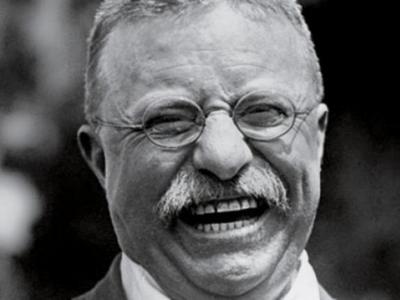 Teddy Roosevelt, the gold standard for dudes worldwide. This dude was a hands down badass muthafucka, and also a great statesman. Let’s start with his childhood. As a child, Roosevelt had terrible asthma. This made young Roosevelt’s athletic interests very difficult to accomplish. Roosevelt took an interest in animals, which he retained his entire life, after seeing a dead seal in the local market. Together with his cousins, Roosevelt stole and stuffed that seal's head. Today, he probably would have been considered…odd. Roosevelt grew up and attended Harvard University where he excelled at science and was a prodigious boxer. He graduated 22nd in his class in 1880. A doctor diagnosed him with heart problems after his graduation, but good ol’ TR ignored his advice and kept on with his vigorous athletic activities.

Roosevelt was a NY State Assemblyman from 1882-1884, after which he left to become a freakin cowboy in North Dakota. He learned to rope animals, hunt and ride horses western style, and he eventually earned the respect of the local cowboys—even if they didn’t think he was particularly good at the job. They said he possessed the “stern, manly qualities that are invaluable to a nation.” A severe winter lost Roosevelt his entire herd of cattle and about $80,000, which caused him to move back east.

Undeterred, Roosevelt soon became Police Commissioner for the most corrupt police department in the country, the NYPD. He standardized the use of a .31 Colt for police officers, hired officers regardless of political affiliation, and made a habit of walking the beat in the early morning and late nights to ensure the officers assigned were actually doing their jobs. In two years Roosevelt turned the NYPD from a center of corruption to a fully functioning professional police force, causing them to relinquish their title to the LAPD, who have proudly carried the banner ever since.

Next up for Roosevelt was Assistant Secretary of The Navy. He urged for war with Spain and when the Secretary of The Navy left the office for 4 hours one day, Roosevelt informed the entire Navy worldwide to prepare for war, ordered ammunition, and asked Congress for sailors to serve in the war. This douchebag move, combined with his fierce independent spirit, solidified Roosevelt's growing reputation as King Douchebag and Dudefest Dude of the Century.

When war began in Cuba, Roosevelt resigned his post in the Navy and helped form a volunteer unit called the Rough Riders. His rough riders were a microcosm of the American public. The group included members of the upper class, educated, athletes as well as cowboys, Indians and any other number of common Americans. On July 1, 1898 Roosevelt led his Rough Riders on the infamous charge up San Juan Hill. Having the only horse, Roosevelt was at the front, leading the charge up the heavily defended hill. He lost 200 men and another 1000 were injured, but they captured the tactically insignificant hill. In 2001 he was posthumously awarded the Medal of Honor, which he was denied for political reasons during his lifetime.

Roosevelt won the New York State Governer’s election in 1898 by 1%. He served one term before being asked to be McKinley’s Vice President in 1900. It was during this time that he coined his motto, “Speak softly and carry a big stick, and you will go far.” When McKinley was shot, Roosevelt became the 26th President of the United States.

After his presidency, Roosevelt took to big-game hunting in Africa and other dudefest activities. When he decided to run for president again in 1912, he was about to give a speech when he was shot in the chest. The bullet passed through 50 pages of his speech and his eyeglass case before lodging in his chest. Roosevelt self-diagnosed and determined that the bullet had not penetrated his chest wall because he was not coughing up blood. Obviously this meant he would give the speech. The man climbed on stage, announced to the audience he had been shot, and then continued to give his prepared 90 minute speech.

Towards the end of his life, Roosevelt went on an expedition to South America where he contracted Malaria from a cut in the leg. He told the expedition to leave him behind because he was slowing them down and they were ill-equipped and running out of supplies. They refused, and he eventually made it home to New York. He died on January 6, 1919. In 1927 his face was one of four presidents included on Mount Rushmore. To this day, Teddy Roosevelt is remembered as one of the most Dudefest men to ever walk the earth.

Quite frankly my dear, Matt doesn't give a damn.

Are you saying that I, Jimmy Fraturday, am Teddy Roosevelt? Because I'm the King Douchebag of the Dudefest, and there can only be one.
Dudes