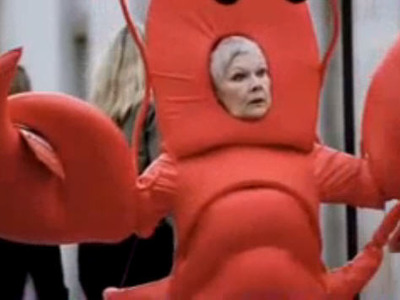 I lived in my car for a while, a Honda Civic crammed full of shit, with another dude. We spent about a month traveling the West Coast, killing time, being poor, and sleeping wherever we found a place to park. While in California, we slept on a beach in Monterey, behind a SaveMart grocery store in Truckee, and on the street next to Dolores Park in San Francisco. The weekend before Halloween 2012, we were passing through San Francisco on our way to Lake Tahoe (where we were ski bumming for the winter), and we finally got a place to sleep that wasn't the car.

A friend of mine from college grew up in the Bay Area, and a few of her friends from home were having a halloween party. They let us crash on their couch for the weekend, and we jumped at the chance to actually sleep lying horizontally for the first time in weeks. So Friday night, we parked the car somewhere relatively safe that was within walking distance of the apartment and head over. That night we just chilled before going to a couple of bars, nothing huge, no costumes or anything. So we went out, got drunk, we all had fun. We walked back to the apartment at around 2:30 AM (past the car, actually) and passed the fuck out.

The next morning, we decide we don't want to spend the entire day in these dudes' apartment, taking up all their space and blowing up their spot, so went to entertain ourselves for a few hours. We got a ride back to the car, and the rear passenger side window was smashed, and fucking everything was gone. As mentioned above, we were on our way to Tahoe to ski, and all of my gear was in that car. Also missing was my halloween costume (I was planning on reusing my old Ash Ketchum outfit), a $10 pair of Target sunglasses, and a comfy sweatshirt that I really liked. (It only cost like $15 so it was more annoying than anything else- stupid fuckin' crackhead didn't steal my $500 DSLR, but took the Old Navy sweatshirt that was on top of it. Also, my friend lost his external hard drive, his passport, and his e-reader, but I'm writing this article and he's not, so fuck him.) So that put a real damper on the whole weekend.

With nothing else to do, we filed a police report (apparently that shit happens about 10,000 times a day in major cities- who knew?) and got the window fixed. We also decided to put the car into a garage for the night, because once the horse is gone, might as well lock the barn, you know? Man, that was a shitty day: vacuuming glass out of the carpet, trying to inventory and value all the shit we lost, and knowing that in a week I was moving into a new place to be a ski instructor with 100% less ski equipment than I had just 12 hours earlier.

We definitely wanted to get drunk that night, so we ended up back at the apartment and starting slugging some beers. If you haven't been able to tell through my writing, sometimes I get pretty pissed off, and also I drink a lot. Both of those happened that night. I was so fucking angry at whatever moron junkie decided to smash my window and steal my awesome costume (it's the small shit that really gets to you, trust me) that I pounded too many beers much too quickly and immediately pissed off everyone I was hanging out with. We headed out to the bars again, and I left my cellphone behind to charge. I also took my shirt off in the taxi and insisted that was my halloween costume, because I was one of the only people not wearing a costume, and I fucking love halloween. The bouncer wouldn't let me in like that, no matter how much I argued with him that "Shirtless" was my costume and "That chick over there is basically only wearing lingerie. This is so unfair", so I put my shirt back on and continued drinking.

As the night came to an end, we left the bar as a group, and some chick in a lobster costume was standing outside selling San Francisco Giants T-shirts. If you don't remember recent baseball history, the Giants were playing the World Series (which they would go on to win for the second time in three years), and Game 3 was going on that very night. If you know anything about me, I'm a big Phillies fan, I fucking hate the Giants, and I will never forget the 2010 NLCS (in which the Giants beat the Phillies on their way to win the first of those two World Series). I angrily told all of this to Lobster Chick (I believe my exact words were, "My least favorite thing about baseball is the fucking San Francisco Giants."). She snapped back at me and asked what my costume was, and I said, "I'm dressed as a guy who just got robbed."

She didn't really know how to respond to that, and surprisingly, we actually ended up talking for a while. I told her all of my sob story, and how I usually lived in the car that had just gotten broken into, and she said, "Well, OK, instead of buying a shirt from me, how about I buy you a sandwich?"

Being poor, and also not a fucking idiot, I totally took her up on her offer. She abanonded her post at the T-shirt table, I abandoned my friends, and we walked to nearby sandwich shop. On the way, she let me wear her lobster claws. The line was about 20 people long, and while we were talking, two big douchebag bros dressed as big douchebag bros tried to cut us. She called them out and they said they were just trying to get a better look at the menu, but they were only like 2 feet closer to a gigantic menu board so they were obviously full of shit. And she told them that, too. They took this to mean I was trying to start shit, and started getting all up in my face saying I better "control [my] woman" or they were going to kick my ass. I was standing in a crowded-ass sandwich shop, wearing lobster claw gloves, next to a Lobster Chick I just met, being threated by two dudes twice my size, and I just wanted a goddamn sandwich. I literally thought to myself, "This is how I die. I'm going to get murdered by these assholes because we wouldn't let them cut in line. Lobster Chick is going to get me killed!"

Luckily, I ended up entirely un-facepunched. They continued to talk shit behind us in line, but we just ignored it. She bought me this big fucking meatball sub, and we left the shop without incident. We started walking to her friends' apartment that was nearby, and that's when she realized that she never actually paid for the sandwiches. And nobody stopped us leaving the shop, so I figured it was a gift from the Universe for being so shitty to me the day before and also almost letting those guys punch my brains out.

We got to her friends' apartment, a hipster-tastic 2-bedroom full of hipsters. We talked about god knows what for what seemed like hours (remember, I was still really drunk at this point) and drank more beers. I realized that if I didn't leave right that second, I was never going to make it back to my friend's friends' place that night. So no, dear reader, this story does not end with me banging Lobster Chick. In fact, I think at one point very early on she told me that definitely wasn't going to happen. I said goodbye to the hipsters whose names I had no intention of remembering, and headed out to the unfamiliar and unfriendly streets of San Francisco in the middle of the night.

I am terrible at remembering names, even worse with addresses, and fucking atrocious with directions. All of this was working against me, and since I had left my phone at the place we were staying, I was pretty sure I was going to die (again). I actually managed to not only remember the address of the apartment, but the nearest cross streets as well. The lack of a sense of direction was definitely working against me, as every time I turned a corner I inevitably walked a block in the wrong direction, but I actually managed to stop two strangers on a street corner that let me look at their smartphone for directions, and I made it back to the place before sunrise.

And of course the door was locked. And everyone was asleep. And I couldn't call anyone to let me in because my phone was in there. So I pounded on the door until someone woke up, pissed off, to open the door, and I was greeted with a very unhappy, "You're not the pizza guy."

The next day, I turned my phone back on and expected to have to go through 50 new text messages and 100 missed calls from my friends, wondering what happened to me. There was one missed call, at 11 PM, and no texts. I told one of my friends, "Damn, I thought there would be like a thousand." He responded earnestly, "Well, you were being mega annoying last night."

Looks like you should have tried to get into the lobster chicks shell after all!
The Forum