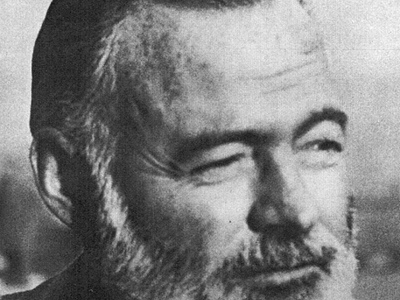 It’s really quite difficult to do justice to Ernest Hemingway in just one article. Entire Wikipedia pages (which I am ABSOLUTELY NOT getting my information from, come on, I have more academic integrity than that!) have been written on this man. Ernest Hemingway was born July 21 (which is my birthday by the way—send presents [money] please), 1899 in the suburbs of Chicago. The family owned a small lake house in Michigan and it was there that, at age four mind you, Hemingway learned to hunt, fish, swim and camp, instilling a love of nature and isolation that would remain the rest of his life. What were you doing when you were four? I'm pretty sure you weren’t hunting, but rather learning how to tie your shoelaces and stack blocks.

In high school Hemingway played water polo, football, did track and field, and boxed. At the same time he managed to be a great writer, publishing pieces in the school newspaper. After school he worked for the Kansas City Star, which would influence his writing style for the rest of his career.

In 1918, Hemingway became a Red Cross ambulance driver in Italy during the First World War. These experiences, such as retrieving shredded women’s bodies from a munitions factory explosion would shape his life and writing. On July 8 he was seriously injured from mortar fire while bringing other soldiers chocolate and cigarettes. Despite his wounds, he carried an Italian soldier to safety, earning him the Italian Silver Medal of Bravery. He was 18. What were you doing when you were 18? I doubt you were saving lives; I bet you were getting drunk at your first college kegger. Sick bro.

Hemingway returned home and was hired by the Toronto Star, where he became their foreign correspondent. He moved to Paris, where he would meet other members of the literary community and “lost generation.” If you've seen MIDNIGHT IN PARIS, that sums up this time period pretty well. Hemingway met F. Scott Fitzgerald in 1923 where they formed a friendship of admiration and hostility. When Fitzgerald published The Great Gatsby, Hemingway decided his next publication would also be a novel. That same year Hemingway visited Spain and developed a fascination with bullfighting (dudefest), and began work on what is arguably his greatest piece, The Sun Also Rises.

Of course the greatest novelist of the 20th century is allowed some leeway on the regular parts of life. He acquired a prominent forehead scar he would carry the rest of his life when he pulled a skylight down on his head thinking it was the toilet pull chain. Dumbass.

In 1928 Hemingway’s father committed suicide minutes before a letter from Hemingway arrived counseling his father not to worry about financial difficulties. Hemingway commented, “I’ll probably go the same way.” HAVE YOU EVER HEARD OF FORESHADOWING, READER? THIS IS THAT.

During World War II, he successfully petitioned the Cuban government for money to refit his ship so it could patrol for German submarines. It is believed this outfitting included a submachine gun and some grenades and any attempt to attack a German sub would be futile. It has also been suggested that Hemingway simply did this so he could boat drunk without fear of repercussions. Dudefest. Hemingway covered the war in Europe extensively. He was present at D-Day, but did not land, despite his claims to the contrary. He led a village militia and got in trouble since, apparently, reporters weren’t supposed to do that, even if they were great at it. He was also present at the liberation of Paris, where he claimed he was the first in the city and personally liberated The Ritz. Neither of these were true, but damn it all if he didn't try to sell the lies.

After the war Hemingway returned to Cuba. He traveled again to Africa where he was involved in two serious plane incidents, one a crash landing and one an explosion at takeoff where he suffered serious injuries. His health continued to decline and his doctors told him to stop drinking, to which he politely (probably not) told them to fuck off. Eventually he committed suicide by putting a shotgun in his mouth and pulling the trigger. He is remembered today as a great writer and even greater dude.

I followed his advice of write drunk, edit sober, except for the editing part.
Pete Hall

And also except that Peter De Vries said it, not Hemingway.
Dudes