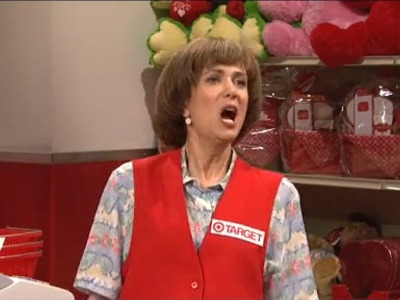 It's been some time since we last provided you with a Guyde to picking up chicks, but that's only because we know you've all been doing so well with our previous instructions. Not because you're a superstar or particularly good at getting laid, but because our advice is absolutely amazing. Well, take a break from the constant parade of world-class vaginas and strap yourself into your computer chair (or let's be honest, your toilet), because this Dudefest Guyde to Picking Up a Cashier is going to change your world. (Legal disclaimer: this Guyde does not apply to Baristas, as they are a very special breed of their own.)

So you're at a book store, or a Blockbuster, or some other retail location that is now completely irrelevant thanks to the internet. You're making eyes at the hot piece of booty behind the register, even though you can't actually see her booty because it's behind the counter. But sometimes you can just tell by looking at a fly honey's face that she's rockin' some serious jeans meat. And you gotta take the plunge and get in on that.

First of all, you have to start frequenting whatever store she works at. Hopefully it's near your house, and not in a completely different city, because this technique requires a long con. So if you want to bang a cashier while you're out of town, you might as well just go up to her and ask if she's down to plow. Actually, shit, that's a really good idea. Screw it, no matter where you live, that's your move now.

Ask Her If She's Down To Plow

Now depending what kind of store you're at, there's likely going to be a huge line building up behind you. She's going to start stressing out because it's her job to make sure those people all get helped, but that's just because women are irrational and easily frightened, much like labradoodle puppies. You're more important than those stupid not-about-to-get-laid idiots anyway, so keep doing what you're doing.

Doing What You're Doing

Obviously, you need to have more lines in your quiver (but this is a quiver full of lines instead of arrows) than just, "So, wanna bone?", but that one is so strong that you can feel free to go back to it whenever you feel the conversation faltering. You can come up with your own specific lines—you're like a sexual J. K. Rowling—but you need to keep the focus on the doing of the it.

Eventually, you will have to admit that the single candy bar you bought doesn't provide that much material for you to talk about with this cash jockey, so you'll have to pay for it and move on. Luckily, most candy bars aren't that expensive (unless you're buying one of those giant Toblerones that for some reason you can only get at the airport, but if that is the case, you're reading the wrong guyde), so you just have to grab another one and get back in line. Buy the same exact kind of candy bar—remember, chicks need consistency, or else their little labradoodle brains get all fried and they soil the carpet. Plus, no matter what kind of store you happen to be in, every retail location on the planet sells candy bars. I think it's some kind of international law, in the liner notes of the Geneva Convention or some shit.

From the back of the line, feel free to wave, or smile, or wink, or wag your genitals at her, to get her attention. Labradoodle puppies lack object permanance, and yup, you guessed it, chicks do too. If you're out of her sight for more than a few seconds, she'll forget you ever existed. This is good for after the deal has been sealed and you want to do the post-hitting it quitting it, because you can just leave and vanish into the aether, but bad before because then you'd have to start all over. So wave/smile/wink/wag away, until you get back to the front of the line.

Once you're up front again, you may notice that she is completing your transaction at a blistering pace. She may also be avoiding eye contact with you and not responding to any of the lines that we both know are just plain gold. That's just because she's so excited to go bone you that she's trying to get done with work as soon as possible. Obviously, this is a good sign, so you should offer to help her. Try reaching over the counter and putting your money in the register for her. Everyone knows labradoodles can't count, especially when they're excited, so your help will be much appreciated.

Get In On That

Alright, dude, you're pretty much in. Ask her if she wants to leave with you right now. Her answer will most likely be yes, because this advice is guaranteed foolproof. If for some reason she says no, that just means she wants to wait until her shift is over. You could go wait for her in the break room, but you run the risk of ceasing to exist in her mind if you do. The experienced move here is to just get back in line again, and repeat until someone comes to take over the register for her. This is usually a manager for some reason, and sometimes it's in the middle of your transaction, but that's just because she's so excited that she can't handle it anymore. When she runs away, she's just going to make herself look good for you- those aprons aren't flattering on anybody. Wait right there, dude. She'll be back.

FORUM
Luigi and Hobbes
Pete Hall
imacreep
Nothing about this seems off to me.
Scrooge
^ relevant username
Jimmy Fraturday

The Dudefest Legal team can confirm that every store has to sell candy bars. Article 4, section 32 of the Geneva Convention
copycat
Looks like Fraturday did my job for me.
Jimmy Fraturday

The Dudefest Legal team can confirm that every store has to sell candy bars. Article 4, section 32 of the Geneva Convention
Dave Richardson
I would totally smash that chick in the picture
ronjon
Agreed, I'd make that chick my own personal surf shop, wax on wax off - am I right?
WillyD
Isn't the chick in the picture from Mad TV? I think her name is Molly Shannon.
Guydes