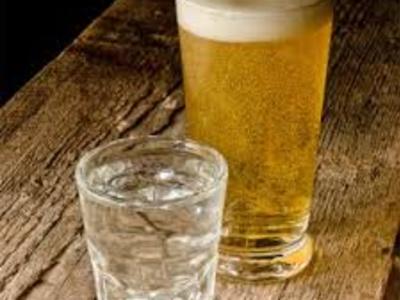 If you read this column, you're aware that I drink. Most of my research is conducted on the weekends though. Not so this week. I went out with a buddy after work anticipating having between one and three drinks. That was not the case. This particular buddy just pulled his head out of his ass and started watching Game of Thrones. Guess what he was doing before we were supposed to meet up.

He lost track of time; he was running late but his episode wasn't over. I'm a huge GoT fan so I told him to finish up. During the time he took to finish the episode and get to the bar, I had purchased and drank three shots and three Miller High Lifes. Normally I don't drink liquor during the week, but the beers were $4 and for one more dollar you got a shot—that decision comes down to math. If the shot and beer deal wasn't enough, you got a free personal pizza with every drink order. Don't worry, I didn't eat all of the free pizzas that I accrued (just most of them).

When my buddy finally showed, we proceeded to drink 5 more of these combos. Amazingly, the shots tasted worse every time. After our fifth cheers to the "King in the North" before sucking down shit whiskey, we made faces and realized we had had enough shots for one night. We were distracted from the vile whiskey by a couple rounds of Bingo at the bar. I want to sit down with the guy who does this for a living—he's got to have some insane stories.

Long story short, I drank 8 Miller High Lifes and did as many shots of some sub-well quality whiskey called Paddy's or something insensitive to the Irish like that on a week night. Needless to say, I didn't work very hard the next day.

Accidentally On Purpose Drunk would be a more fitting, yet grammatically incorrect title for this one
Beer Musings