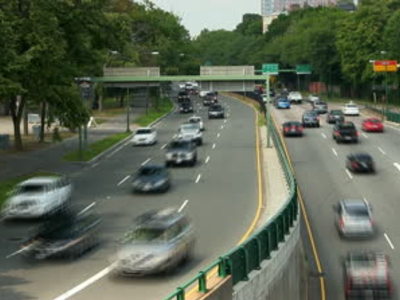 Unlike Sliz, Smigoversen, and Holland (but only because he's a Philly sports fan), I don't often get angry. Even my Mom has said that I'm "chill", although that was when I had a long battle with the flu. Traditionally, it has been very difficult for me to get pissed, but after six years of living in Boston, and a year and a half commuting in the Boston area every weekday, I think I've finally found my calling.

I could rant about how awful Boston roads are. I could focus on any or all of the following:

I could talk about those things, but I feel like this semi-popular meme sums Boston roads up perfectly. 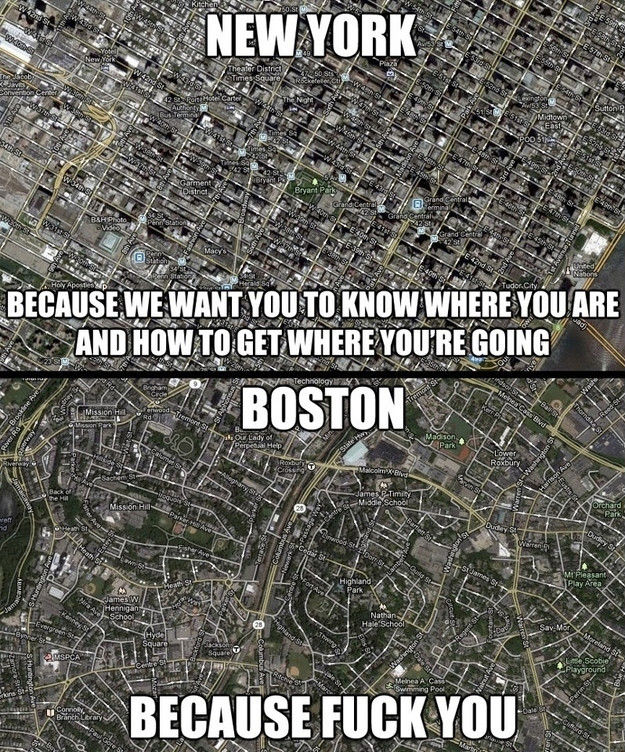 At this point, I've gotten used to the roads. It's really the drivers that I can't stand. You've almost certainly heard the term "Masshole" before (if you haven't then I probably hate your face), but unless you've spent a fair amount of time driving in and around Boston, you probably don't fully understand its meaning. You're probably thinking "Oh, a Masshole drives 20 over the speed limit and merges like twelve lanes at a time and is constantly getting into car accidents and is always honking their horn." And you would be wrong.

Massholes are not bad drivers. Because of the shit show that is the Boston "grid" (term used incredibly loosely), Massholes can't be bad drivers. In fact, Massachusetts actually has the lowest fatality rate among all U.S. states. And they don't go 20 over the speed limit, because like all other places, except I assume Las Vegas, Boston has police officers that will rain consequences down on you for breaking laws. Massholes also don't lay on their horn; honking in Boston is mostly reserved for people who are not paying attention to the road as much as they should be, or people who are making it clear to everyone else on the road that no one else matters but them, which brings me to what a Masshole actually is. Someone who believes they are the only person on the road who matters.

While every Masshole is different in their own god awful way, there are a couple of common dick moves I associate with their kind.

The first variant of what's traditionally refer to as the "Boston Left", the "Burst Left" is typically done at a four way intersection without separate traffic light arrows for left turns. When the light turns green for parallel ways at the intersection, the antsy Masshole will dart out of the gate to take a left in front of oncoming traffic. Sometimes Massholes are not even content to wait for ONE GODDAMN CAR to go through the intersection, despite the fact that the car has the indisputable right of way and its driver is incapable of letting things go. Drivers of blue Prii (the official pluralized version of Prius) with license plate "566FEJ" should be warned.

This is the second variant of the "Boston Left", and the much more asshole-ish variant. While the burst left will take at most a second off of your life, the "Boston Left" can take over a minute. A horrible minute during which the only thing you'll want to do is Falcon Punch the stupid Guido-faced dumbass driver in his chest until his skin is no longer orange. The "Creeping Left" will happen when an (obviously) impatient Masshole will begin to believe the side street he is on should have right of way over the busy two-way street he's trying to take a left onto. He'll slowly move out into oncoming traffic from the left, stopping everyone coming from that side until someone coming from the other direction decides to stop to let him in.

A rule of driving in Boston that I tell everyone who visits is that no matter how close you are to running a red light in Boston, there will always, ALWAYS be someone running it behind you. This is because in Boston, the concept of a yellow light is much different than other places. The yellow light traditionally means "be ready to stop for the red light". In Boston, however, this meaning has been tweaked, and the yellow light means "green light". The rule of thumb in Boston with yellow lights seems to be (I've formulated this over the past couple of years) that if you see the yellow light at all, regardless of how far away from you it is, it's totally okay to go through the intersection. Even when confronted with a red light.

This aspect of Masshole driving may be the worst one. In Boston the concept of "blocking an intersection" does not seem to exist. While illegal everywhere and all the time, I have never seen anyone get pulled over, ticketed, or so much as spoken to for blocking an intersection, despite the fact that I've witnessed it on the majority of my commutes to work since September 2012 (and we moved offices last year). In most places, if you're going to try to drive through an intersection, you make sure that there is room at the end of the intersection before moving through it. In Boston, idiot Massholes see a green light, think "UH GREEN MEANS GO" and move forward thirty feet to the middle of an intersection, which is as far as they can move forward because a couple of their pals in the MDS (Masshole Dumbass Society) are blocking the rest of the intersection. When the light turns green for the perpendicular streets, not a single car can get through due to Masshole lack of shit-giving. Sometimes Toyota Corolla owners really just want to sideswipe the shit out of intersection-blocking Mercedes Benzes in this situation, but opt not to because it would be "a whole thing".

For the sake of brevity (and to prevent a brain aneurysm), I'll stop at four, but suffice to say that there are plenty of other classic Masshole dick moves ("The Boston Merge", "The Boston One-Way Reverse", "The Boston Breakdown Lane", "The Boston Tailgate"). If you're going to be in Boston at some point in the near future and you're looking for driving tips and warnings, feel free to send me an email (but only if you're female of course). If I haven't responded to your email yet, just remember to stay safe, and always fight Masshole with Masshole. Become the enemy and you'll succeed.

OPINION
The Biggest Roster Mistake The RESERVOIR DOGS Made
Smigoversen
The Jocker
And they're usually Red Sox fans so they can just go fuck themselves.
Rants