A Website Made For Websites, By Websites
DUDEFEST ALWAYS KNOWS THE SCORE 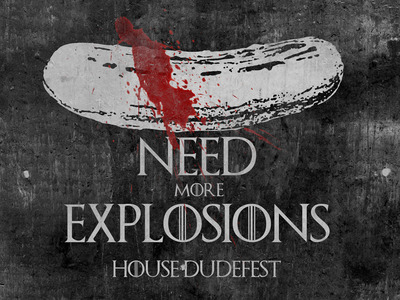 Season 4 of Game of Thrones is well underway with another excellent week of action for A Fantasy League of Ice and Fire, Dudefest.com’s official Game of Thrones Fantasy League. This continues to be the dudeliest show on TV simply because the cast is fucking enormous. Jon Snow hasn’t had a scene with Joffrey since the first episode of the entire series. And they weren’t even in the same shots. And they never will again.

Let’s take a look at the standings going into this week’s episode: 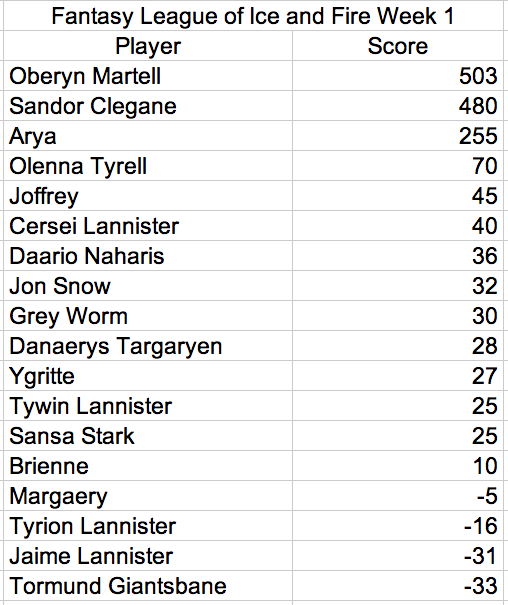 And now, this week’s top performers: The Kingsguard

The week started off strong with Ramsay Snow chasing down a defenseless woman with his dogs, an emasculated Theon Greyjoy (now known as Reek) and one of the chicks who banged him when he still had a penis. 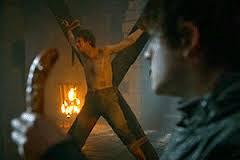 That's not a pickle

Ramsay came out of his bye week with a fury resulting in the second highest score this week. He did that by making his scenes with his Father, Roose Bolton, count. To prove that he had turned Theon Greyjoy the enemy into Reek the ally, Ramsay had Reek shave him. During the shave, he told Theon that Robb Stark, a man who had treated him like a brother, was dead. And Theon couldn’t even cut Ramsay’s throat. This is strong evidence that Ramsay is a dark horse candidate for highest kill count this season.

Narrowly edging out Ramsay for the top spot for the second straight week is Oberyn Martell. He has made it abundantly clear that he came to King’s Landing to do two things: chew bubble gum and kill Lannisters. And if you’ve been paying attention, you know bubblegum doesn’t exist in Westeros. This week, Oberyn used his words to great effect. Not just his words, he used his whole mouth - like when he made kissy faces at Loras Tyrell (+100). He was most effective during his speech to Tywin and Cersei regarding bastards and how to treat people. If you recall from Season 2, Myrcella is engaged to his nephew Prince Trystane in Dorne. Oberyn talks about the death of his other niece and nephew: Aegon and Rhaenys who had been Rhaegar Targaryen and his sister Elia’s children. They were murdered by Gregor Clegane. This is the most interesting conflict so far this season. Oberyn continues to be the favorite for MVP honors this season.

Yeah he died. But he was a douchebag until the very last second. And that kind of per minute production will score you points in fantasy. He lost 600 points for dying. But managed to rack up a ton more by dying doing what he loved - being a shithead to Tyrion (+800 points). He also sliced the Tyrion’s wedding gift of books with his new Valyrian steel sword from the premier. When you add in offending almost all of his guests with his midget rendition of the War of 5 Kings, it was a strong last performance. Sadly, that poison is a career-ending injury. I don’t think anyone is going to miss him. Except Cersei (maybe).

Rounding out the top 4 are the Tyrell women who both achieved major accomplishments this week. After three seasons of trying, Margaery finally became Queen (+200). She would have gotten more for that but she wasn’t Queen for very long… The Lady Olenna continued doing what she does best: talk the best smack in the seven kingdoms. In one scene she managed to tell Lord Tywin that the Iron Bank would get their money back from the crown no matter what and drops the best catchphrase since “Valar Morghulis” with “The Iron Bank Will Have Its Due” (+40). She also manages to reference the Red Wedding by saying it will make men more afraid of marriage right after suggesting Tywin try enjoying himself some time, he might enjoy it. Tyrion might have more wit pound for pound, but they call him the Halfman for a reason.

While not the highest scoring week, Brandon Stark had a big week of development as a character. He kills a deer while warging into his direwolf Summer's body (+40) but he got woken up before he could eat it. And Jojen Reed tells us he’s been spending too much time as a wolf (-10) and could lose his humanity if he keeps it up. So he wasn’t off to a great start, but he has a vision when he touches a weirwood tree. He gets flashbacks from all over Westeros and a voice tells him to find the Three Eyed Raven. The voice tells Bran the raven is beneath a weirwood tree somewhere beyond the Wall. So Bran decides to go (+110) and Jojen, Meera, and Hodor are coming along for the ride.

Who’s in the Black Cells this Week? I’ll give you a hint, they have the same Dad...

What’s the only family in the history of A Fantasy League of Ice and Fire to score the three lowest individual scores in a week? The Lannisters. Their words may be “Hear Me Roar” but Katy Perry wouldn’t be impressed by the noise they’re making these days. We already discussed the way Joffrey treated Tyrion before he was poisoned so you know why his score is low. Cersei and Jaime lost a son at the end of this episode. And Tyrion got blamed. Do I really need to elaborate beyond that? I will anyway: Cersei sent Grand Maester Pycelle away from the feast, he probably could have helped Joffrey when he was choking/poisoned (-50). If she hadn’t been such a bitch earlier in the episode, her score would be much lower. Jaime and Tyrion have been getting shit on all episode. From all sides. Ser Jaime tried to dish some back out to Loras that he would never marry Cersei. Loras is great at both swordplay and wordplay and knocked the insult right back at Jaime that he wouldn’t marry her either. Harsh. 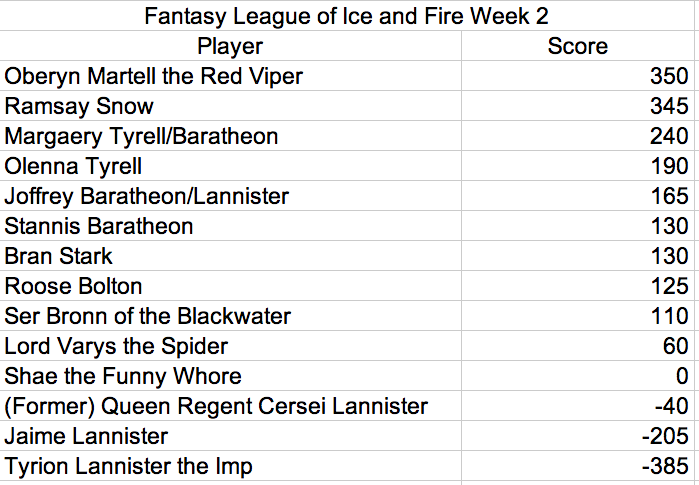 We’re starting to get an idea of how this season is headed so let’s project the contenders for the highest kill count this season: 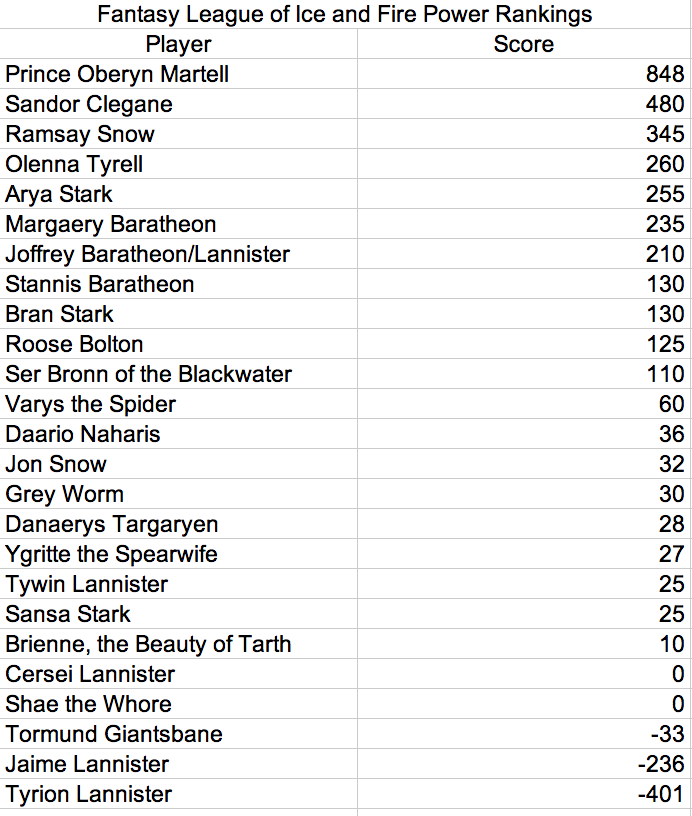 Smigoversen takes notes during the episode. He twitters here.