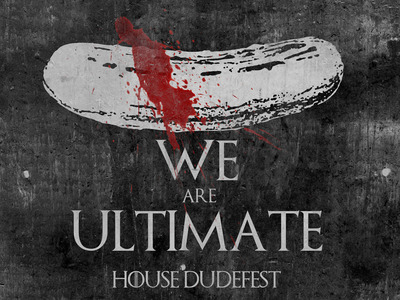 Here we are again. Another insane week of action in the Fantasy League of Ice and Fire. We picked up right after King Joffrey, the royal prick himself, died at his own wedding feast with Tyrion being seized and Sansa making her escape with her fool Ser Dontos. Well, he didn’t quite make it. I’m getting ahead of myself, let’s get to this week’s top performers.

After an uncharacteristically slow start to the season, Tywin came roaring back to fantasy relevance this week with not one but two excellent scenes. The King’s Hand has now served and outlived three Kings so it is only fitting that he first appears next to his grandson’s corpse in the Sept of Baelor with the Queen, Tommen Baratheon, and eventually Jaime. He gives one of his trademark speeches where every word is dripping with meaning. He drills the young man on what makes a good King. Tommen (a little boy who got his ass kicked by Bran at Winterfell before he… y’know, fell) took a few tries before getting it right. A good King isn’t holy, or just, or even strong. A good king possesses wisdom. To illustrate his point, Tywin gave a history lesson that culminated in a very Mallory Archer way—the only person in the world you can trust is me. Always the pragmatist, Tywin quickly moves on to asking Tommen why he has to marry Margaery now that Joff is dead. It's pretty clear when Tommen responds that a King must have a Queen that no one has told him about the birds and the bees. So Tywin does, starting off with the best possible phrase “it’s quite simple really” before they head off screen. I would have let Joffrey come back to the dead if it meant I could hear that conversation in full.

While not the top scorer for the first time this season, he turned in a fantastic performance in only one brief scene. That starts off in a brothel (duh) mid-bisexual orgy (also duh +150). Oberyn is engaging in some light Ultimate Dudefest, when his woman Ellaria wants in on the male prostitute only to discover that the dude doesn’t swing that way. Oberyn explains his lack of a preference with fantastic phrasing “I see this (grabs the dudes ass) and it delights me.” Can’t argue with that logic. He goes on to say “In war, I fight for Dorne, but in love I do not choose sides” (+30). All of a sudden, Tywin’s back and kicks everyone out so he can talk to the Prince of Dorne. Their conversation was 80% veiled threats and 20% blatant threats (+50 for both). I don’t know what it is but there is so much menace behind everything these guys say—no wonder they finished in the top two this week. It’s like they were pushing each other to be even greater. The big take away from this scene is that the Mountain will face justice if Oberyn plays with Tywin’s balls, I mean plays ball with Tywin—but I think Oberyn would be game for either to be honest.

Guess who just found out that Joffrey is dead. Stannis the Mannis, that’s who. He isn’t having a great season in general but he managed to score some points by way of two of the usurpers that he had Lady Melisandre put a hex on are now dead (+200). He also managed to lay some verbal smack down on Davos’s stupid idea. Actually, by the time we left Dragonstone for the week Davos had a great plan to write to the Iron Bank of Braavos to see if they will support Stannis because the Lannisters are not paying their debts to the Iron Bank. And if you recall what the Queen of Thrones said about the Iron Bank last week, you remember that they always get their due. Wait, that’s exactly what she said so I guess you didn’t need to remember that if you didn’t want to.

It was a good week to be a Wildling. If any of these players are available on the waiver wire, scoop them up immediately. They should be rostered in all leagues and playing most weeks depending on your bye-week situations. Tormund scored the most points by killing more people during their raid. But in my humble opinion, the Magnar of Thenn is the best prospect of the three. He had the best line (“I’m going to eat your dead Momma, and your dead Poppa, go tell the Crows at Castle Black”), seems to be in charge, and has a really cool axe.

Jon Snow had a big week in terms of character development. He proved that he no longer knew nothing (+40). He now knows some things. One thing is that the crows should not fly out of Castle Black to fight the Wildlings. He also knows after Grenn and Dolorous Ed return from captivity at Craster’s Keep that they need to go kill the mutineers before Mance Rayder gets a hold of them. Another thing Jon Snow knows is the difference between the number of men he told Mance were in Castle Black and how many there actually are (1,000 vs 100). If you’re looking for some depth at the end of your bench, you might want to look at picking up a couple Black Brothers.

The Mother of Dragons has finally arrived at the great slave city of Meereen. Half of the city was on the walls to watch what would happen. She lined up her army and waited for their champion. This guy scored himself a lot of points with his boisterous boasting and took a couple shots at Dany and her army (i.e. an army of men without cocks, except for Dany who keeps hers in her asshole). Dany needed him to shut up so she named Daario her champion after he made an impassioned plea (He isn’t one of her generals, or leader of the Unsullied, his Mother was a whore, and he really wants to kill this dude for Dany). Personally, I would have gone with Grey Worm, he’s so bad ass and doesn’t get to do nearly enough—might be worth a stash on your bench in deeper leagues just in case. Right when owners were scrambling to pick this mystery champion of Meereen off the waiver wire, Daario took him out. In one of the suavest murders yet, Daario threw his dagger in his opponent’s horses eye and cut the fallen rider’s head off when he landed in a heap at his feet (+250).

Let’s not focus on the negative and move onto this week’s scores: 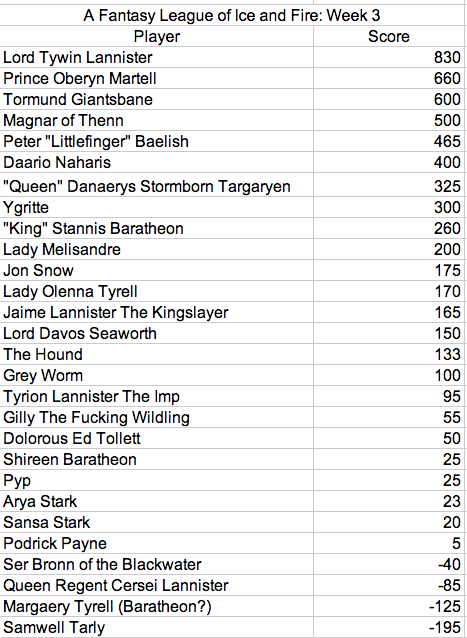 And now the power rankings for weeks 1-3 of A Fantasy League of Ice and Fire: 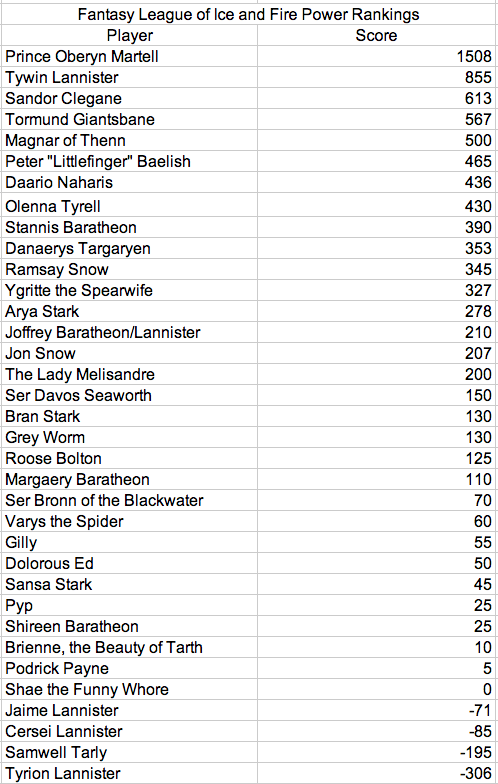 my team of all chicks faired ok. still banking on the nudity points rolling in
Pete Hall

I read these articles every week, and I still have no idea what's going on.
Joe Kennedy

I'm disappointed that Tommen only taking four guesses to figure out the most important aspect of a king didn't warrant any points. Since the only player of mine who scored points this week was Bronn, this was not a good week for my team.
The Score