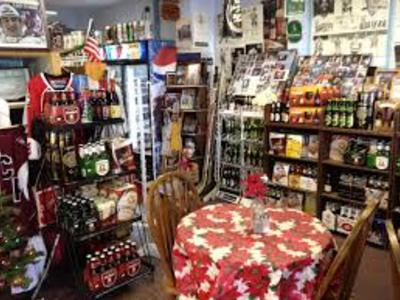 Buying beer at the grocery store is a chump's game. Real dudes go to your local delicatessen (corner stores/gas stations work too). For a long time they have satisfied my needs completely—my college beer was purchased almost exclusively from the corner store Graby's on Wescott in 'Cuse.

What's great about Graby's is that I knew it was a sure thing. They sold a shit ton of beer so you didn't have to worry about it being stale. It wasn't cold all the time—but if that was the case I would just pretend to be English and I didn't mind anymore. People were definitely annoyed by the accent though.

Now I live in Brooklyn. There are six delis within walking distance of my apartment. That's a lot of options, because each of them have a different beer selection. Therefore, you need to do your research and find the best deals. This is no time to get cute, if you haven't tried something before, don't let this trip to a rando bodega be your first time. That shit's probably been sitting on the shelf for a year or longer. For example, I accidentally bought a Brooklyn Dry Irish Stout in November. I later took a look at when it's brewed and discovered it was last year's batch because it wouldn't come out for three more months.

Really you should avoid craft beer in general. You're the only person buying them. Maybe you can take a look if you see a new one. This leaves you two options: Mega-breweries like Bud and Coors or weird foreign beers.

The good news is if you go for something south of the border, Montezuma's Revenge won't be on the table. Unless the brewery put a hex on that particular can (it's always a can—unless it's a 40 which is always an option for a dudefest dude such as yourself). The important thing is to trust your gut. Does it look skunked? (Some people can tell.) How trustworthy looking does the man behind the counter look? Has the power gone out for an extended period of time recently? Do you think the store owner pays his electricity bill? (OK that might be a little overboard.)

No matter what, it'll be alright. Even if your beer is skunky, you won't notice after a couple and it gives you an excuse not to share. In general, you shouldn't give someone a skunked beer. It's in poor taste.

FORUM
Almost Getting Arrested on My 21st Birthday
Jimmy Fraturday
John Roberts
So your expert beer advice is to racially and socio-ecomomically profile the establishment I'm purchasing my beer from? Man, you're a phony!
Dave Richardson
I love gambling, but prefer the kinds where I can win money to buying beer in odd places
Beer Musings