Your Mom's Favorite Website
MUSINGS FROM OUR CHEAPSKATE BEER SNOB 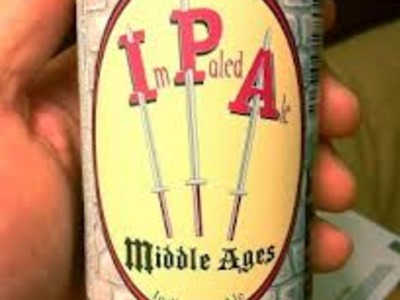 I took a trip to Syracuse, New York this week. I had a great time while I was there. Didn't see the sun for a second but I did see a few tasty beers. The highlight of my trip was stopping by the Middle Ages Brewing Company’s tap room. While I was there I did a few tastings and filled a couple of growlers. For those of you out there who haven't invested in a growler, I highly recommend that you get one for your next trip to a brewery or, if you're lucky, grocery store/gas station near your house.

I filled the first growler with Middle Ages' ImPaled Ale, their India Pale Ale. This is a fantastic beer brewed in the English tradition. All of their beers can be described that way. The brewers at Middle Ages give their beers medieval names inspired by the style or influences present (best examples: Wailing Wench and Double Wench). Impaled Ale has a muted hop palette. At no point in your drink do you feel overwhelmed with the bitterness. This is a positive and unique characteristic for a beer. If you have a friend who “doesn’t like IPA’s” this is a good one for them to try. You won’t change their mind about IPA’s but you will get them to want another sip if not a bottle of their own. The major hop flavor comes from Cascade hops which are indigenous to the Pacific Northwest. This strain of hops was integral in putting the American craft beer scene on the map. This particular IPA is stronger than others out there like Saranac and Southern Tier at 6.5% alcohol by volume. Highly recommended for dudes especially if you like hoppy beers.

My second beer was just as good as the first. Strong Heart Stout was and continues to be great. It's inky black and has a thick head that holds the aroma in your glass from start to finish. It is sweet and full flavored. Your whole mouth fills up when you take a sip. The sweetness is tempered by a light bitterness that hits the sides of your tongue. I like this stout because it doesn't make you feel full after drinking one. I drank the whole growler in a couple of hours and was ready for more as soon as I was done. Usually with a stout I would need a break after a growler because I was full. And on top of that Strong Heart Stout is 6.6% alcohol. Compare that to Guinness which is only 4.3% alcohol by volume. This is a strong beer for strong dudes. Females need not taste.

Both of these beers are available in deluxe packages. For every IPA there is an X Double IPA which was released to celebrate the brewery's 10th anniversary. It is also 10% alcohol by volume. The Strong Heart Stout is exceeded by Dragon Slayer, a Russian Imperial Stout. This is also great and is 9.5% abv. You should drink one after accomplishing great victories over your enemies or other forms of extreme adversity.