Tastier Than a Handful of Granola
SELECTIONS FROM THE DUDEFEST GUYDE 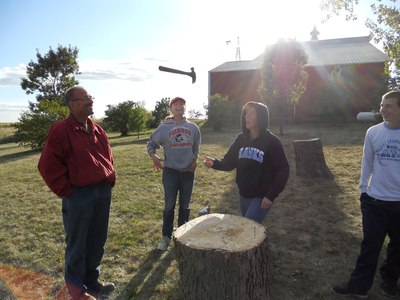 Stump is the world's greatest drinking game. It's fun, loosely structured, and increasingly dangerous as everyone gets drunker. All you need is an old stump, a hammer, and large numbers of beers and nails. To set up, everyone hammers a nail a little bit into the stump. The objective is to be the last nail standing. This is accomplished by hammering other people's nails into the stump.

Sounds pretty easy right? It is, but not as easy as you think. You don't just get to slam the hammer down on any old nail whenever you want. What you have to do is throw the hammer in the air first. Once the head of the hammer comes around again, you gotta catch the sucker and bring it down on a nail in the same motion.

Obviously, this is all done one handed because you're drinking throughout this. That's right, you aren't ever prompted to drink your beer other than when you want to. FYI you're probably going want to drink after every hammer flip slam combo. I don't know why but there's something about seeing a hammer hit nails in a stump that makes me thirsty.

Let's say you want to get fancy. If you were to throw the hammer behind your back, you get two hammer hits. And if you're feeling really frisky, underneath your leg for three hits. Just be aware that if you don't catch it, feet everywhere are in danger. Let's face it, if you're playing Stump someone(s) is/are barefoot. That's the type of person that the game attracts.

It might seem counterintuitive, but you should get fancy early on in the game. Because eventually you'll be too drunk and you will drop the hammer on somebody. Not the cool "drop the hammer" like with a knowledge bomb or WWE style finishing move. You'll physically drop a hammer. And if you're lucky it lands on your toes—that way only you're upset.

For the strategy inclined, you should always include a "rule nail" in the middle of the stump. Anyone who gets a good hit on it gets to make up a rule for the remainder of the game. If you want to be a dick, you should say no one can use pronouns. If you don't want to be a dick, you should think of something different. Stump is a great way to brainstorm so you're almost guaranteed to strike gold every time. Also Labatt Blue is the best beer to use. Don't ask questions, I think I've earned your trust by now.

OPINION
Vending Machines Are The Most Out-Dated Technology
Joe Kennedy
Bat Swinger
Don't forget to yell "Sparks!" if you see any, and make sure you drink to celebrate the danger
Ram Jam

No really. Dudefest Humps & Stumps Summer 2014? in Canada, New York? Brought to you by LaButt Blau?
thebigd
What on earth does any of that mean?
Ram Jam

Man, This sounds stupendous. And with LaButt Blau? I'm in.
Guydes