Tea Bagging You With Knowledge
DUDEFEST ALWAYS KNOWS THE SCORE 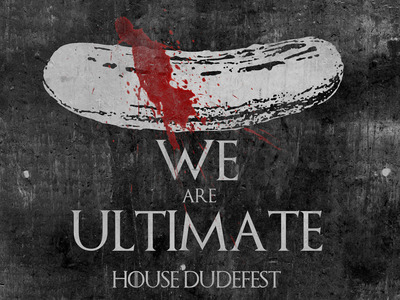 This was a very special week for A Fantasy League of Ice and Fire. For the first time, people who read the books had no idea what was going to happen next. That’s a weird feeling. But holy crap was it exciting. Before you ask, yes I was more than a little upset that there were zero Tywin or OBeryn sightings - but everyone gets a bye week eventually. This episode focused on the peripheries of the Wonderful World of Disney - I mean Westeros.

Those aren’t temperatures. It was a tough week for everyone’s favorite Three Eyed Raven seekers. Summer got caught in a trap. At first I thought that was foreshadowing but the rest of the gang got captured way too quickly for that to be the case. They’ve fallen into the clutches of Karl Tanner, nicknamed The Bastard of Craster’s by Campus Commissioner Kevin Morrisey. Remember when he killed Lord Commander Mormont? Well, since then he boiled all the skin off of his skull and drinks wine out of it. He also talks to it sometimes. I’m pretty sure it was the skulls idea to “Fuck them ‘til they’re dead” Regardless, it turns out that Karl was an assassin before he took the black. He boasts about collecting 7 silvers for each murder - I don’t want to be the person to break it to him that that’s not a whole lot of money for a crime that carries a sentence of life on the wall. On top of all of this - he’s kind of a dick to Rast. At first he was going to be punished for bullying Rast, but then I remembered how he used to be a dick to Sam and Jon back at Castle Black so Karl was rewarded for making him his bitch. Jon Snow might be on his way to kill the mutineers, but until Karl loses his first fight since he was 9, he’s an every week starter in all formats.

Remember last week when I said Grey Worm didn’t get to do enough? This time around, he was plenty busy. Busy leading the assault on Meereen, busy convincing the slaves to rise up, busy giving the High Valyrian equivalent of the Braveheart “They will never take our freedom” speech, and busy taking the city without a single Unsullied dying (again). Grey Worm is the shit. He had some great lines this episode like “One day of freedom is worth more than a lifetime in chains” and more importantly “Valar Morghulis” (quickly becoming my favorite cheers now that the King in the North is no more). Also, I just kind of like how he refers to himself as “this one” instead of Grey Worm or even a personal pronoun. Dude’s a boss, he commands the Unsullied. He has the biggest hypothetical penis in the series, and don’t you forget it.

This week’s top scorer. She completed the threepeat of conquering all of Slavers Bay. And I’m pretty sure she did it without losing a single soldier in combat. (So much for “blooding them early” I guess). After the city was taken, she had 163 Great Masters nailed to posts like the children had been on her way to Meereen. When Ser Barristan wanted to show mercy, she shot him down with a little bit of “I will answer injustice, with justice.” Quick question, why is justice synonymous with killing people? Speaking of Justice, let’s move on to just South of the Wall.

The guy who used to know nothing has sure figured out a way to make some friends in the castle. The acting Lord Commander Alliser Thorne (a.k.a. The Old Pomegranate due to his weird skin tone I guess) knows that if they were to hold a choosing today, Jon Snow would win and not him. Janos Slynt advises him to reconsider sending Jon out to Craster’s to kill the mutineers in the hope that the mutineers will kill Jon. In the meantime, Jon is training the new recruits and all of a sudden Roose Bolton’s henchman Locke shows up. I don’t remember him committing a crime that wasn’t sanctioned by the new Warden of the North… I wonder what he could be up to. He spins some B.S. story about stealing game from his lord in the Stormlands even though he has a Northern accent (you guys recognize a Northern accent from a Southron right?). It’s pretty clear that he has gotten on Jon’s good side by the time he volunteers to go North to Craster’s with him (Oh shit, isn’t Bran up there? And isn’t Locke at Castle Black with the express purpose of finding and killing the Stark boys? In case you haven’t been paying attention, the answer to both of those questions is yes)

Sadly, the Queen of Thorns is departing Kings Landing soon. That’s the worst news I’ve heard since Robb Stark was killed. More people know that I love Olenna Tyrell than who Joffrey’s real Daddy is. While she will not be penalized, the viewers all lose 500 points. So, sucks for us. On a more positive note. Olenna confirms just how involved she was in Joffrey’s murder. And to tie a nice pretty flower shaped bow on everything, she tells her granddaughter that she almost married a Targaryen. But when they met, she wasn’t having it. So she seduced the man who was supposed to propose to her older sister . He married her instead. Well done all around.

While she isn’t the top scorer this week. She did manage to sneak into the King’s bedroom and give him what I would imagine was his first royal erectishort) She seduced the shit out of that eight, maybe nine year old boy. Look me in the eye and tell me Tommen didn’t totally beat off after she left. Go ahead, try it. I can see you through your webcam.

I don’t feel like dwelling on the negative so let’s just take a look at this week’s leaderboard. 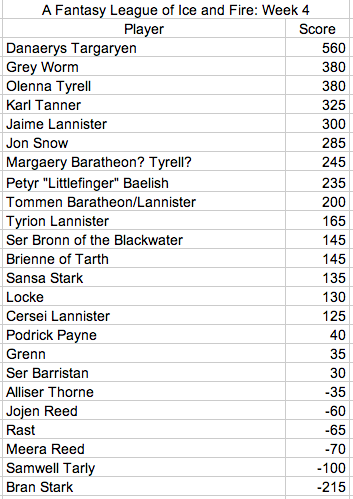 And finally, check out Oberyn still sitting pretty at number one overall for the season. But Dany's coming in hot on his tail. This is no longer a one dragon race! 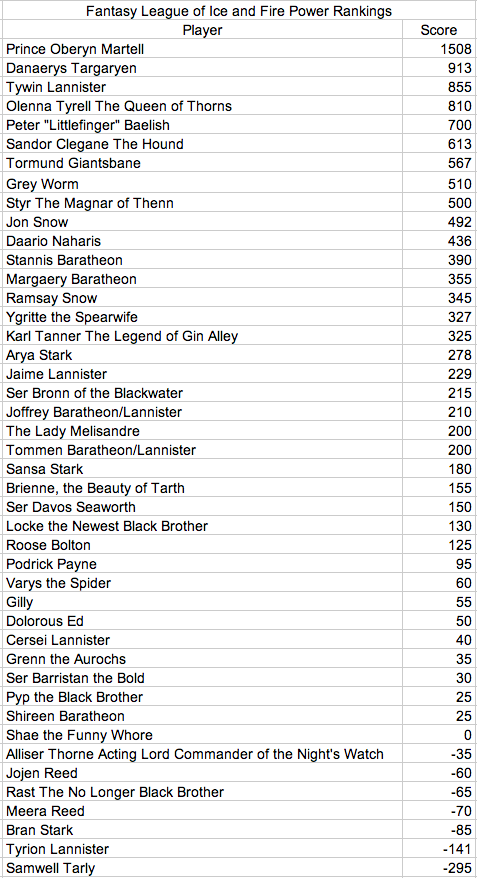 Kennedy goes par for the course with a whopping zero points for the second consecutive week.
Jimmy Fraturday