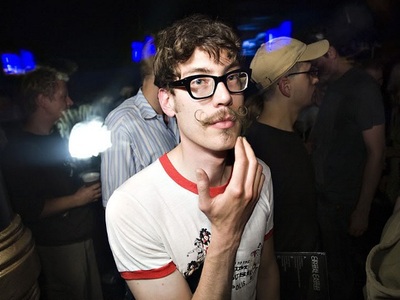 There is an entire internet phenomenon dedicated to hating on the hipster and I fucking love it. To all you bloggers out there who are taking stabs at the hipsters, keep up the good work! You are all doing a fantastic job! The only reason I’m even bothering with this rant is purely for shits and giggles because there is only so much you poke fun at smoking American Spirits and wearing hater-blockers. But I still fucking hate the hipsters, so it’s only fair that I dedicate a small portion of my time to ranting about them. Here are the main reasons why I fucking hate all of you.

Dressing a certain way does not mean you’re instantly well-versed in the arts. The complete opposite actually. The arts is a legitimate academic subject that requires more than a bitchy attitude to take part in. I really like drinking draft beer and eating fried food at bars, but do I pretend to know about sports? FUCK NO! I don’t know jack shit about sporting events; therefore, I don’t attempt to talk about it in social situations. But I do happen to have an bachelors degree in art history. So the next time you judge my ability to debate contemporary art based on my polo collar why not try picking your skinny jeans out of your pretenious ass first and then go blow yourself because that would hold more artistic value than the bullshit coming out of your mouth. I’ll rant about this shit for days if it gets you doops to stop pretending your clothing makes you scholars.

You don’t control what alcohol is popular. End of story. Are you actually proud that you "brought back PBR"? Well sucks to be you because you didn’t do jack shit about that. Broke college students and blue collar old men have been sustaining the Pabst Brewing Company for decades, so don’t think that you’re special because the marketing team at Urban Outfitters decided to put their logo on a t-shirt. Here’s a thought-- drink what you like and stop giving a shit about if it’s socially acceptable to be seen with a particular beverage in your hand. For example, I love sipping on a Busch Light. I could care less if that makes me seem like I just rolled out of a smelly fraternity basement, I’ll drink what I want and give zero fucks while I do it. So do yourselves a favor and stop “claiming” your booze selection in the name of your brandless lifestyle because it defeats the whole purpose of being a hipster you dickwads.

To all of you douchebags that think flannel is part of the hipster culture: you should all stick your heads up your own asses. I’m serious, stick it all the way up your asshole. Because that’s where your arrogant face belongs. Flannel shirts are made of a wool blend fabric and have been around since the 16th century, making it one of the most mainstream article of clothing used for over 500 hundred years. So wearing flannel actually negates everything that a hipster stands for in terms of not following popular attire. Flannels are also meant to be worn for utilitarian purposes in cold weather, so why is everyone wearing them in cities in the middle of fucking summer!? If you want to wear plaid patterns on the reg that’s fine with me, just stop judging me for my preppy style because I actually know what season to wear wool during. It’s winter, in case you were wondering.

So to all the hipsters in the world, just shut the fuck up. If I hear one more person say how trendy kale is right now I will track you down and curb stomp you and your collection of "rare" 8-tracks. Come at me!

OPINION
The Biggest Roster Mistake The RESERVOIR DOGS Made
Smigoversen
Sliz_Is_My Bottom_Bitch
If all the hipsters died, America would be a better place.
Lady Pants
Stop trying to box us in, man. Labels only bring all of us down. Peace out.
Joe Kennedy

Hipsters are always listening to their weird bands like A Cat Named Walrus.
Rants