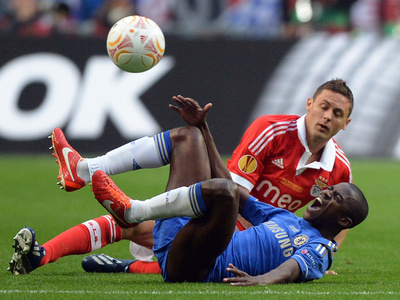 Also known as "Imposter Football," soccer is currently the sport of choice for dirty Europeans and third-world countries everywhere (we assume no one's told them about real football yet). It's truly a spectacular game with a rich history of being more excruciatingly boring than NPR's pledge drives. Basically, a ball is pitched onto a big patch of grass, and for 90 minutes a herd of cavemen/male models trip over themselves in an attempt to please the angry mob of racists they call their supporters. There are many many things wrong with this ass-backwards "sport" but here are just a few.

"Hey, I've got an idea," said some asshole forever ago, "you know how, as humans, we have hands? What do you think about playing a game where instead of using them, we flounder around like a bunch of amputees swinging our legs at each other?" Somehow the idea caught on (I blame opium) and henceforth we had soccer. There is one player who can use their hands, but it's usually the fat kid who can't keep up with the others anyway, so he gets stuck in the goal. It's infuriating to watch this kicking and screaming, because we already know what soccer would look like if hands were allowed. It's a better and infinitely more dudefest sport, rugby.

Speaking of rugby, soccer also lacks one fundamental aspect of dudeliness: Physical Violence. In hockey, fights are commonplace. Players fight willingly and often. In football, despite numerous pads and penalties, everyone cheers extra-hard when an opposing player collapses in pain from a particularly crippling tackle. In soccer, a tackle just means a slide, and the only truly gratifying hit I've ever seen was a headbutt during a World Cup. And I had to wait over an hour into the game for that, which was basically waterboarding. Moreover, The player that so bravely crushed a guy's sternum with his forehead had to retire, disgraced. They should've given the guy a goddamn medal for "savior of my afternoon."

But soccer's most grievous offense hits especially close to home. Not satisfied with keeping their grubby little hands on their own backwater sport, they had to go and ruin basketball too. We've all seen it lately, even from basketball's golden boy Lebron James: Flopping. Literally the act of pretending to be hurt. Before I watched soccer I wasn't aware that every player was in the second fucking grade, but watching them roll around crying and writhing I'm convinced they might be even younger. It's supposed to be a gentleman's game of sportsmanship and respect, yet their messiah Cristiano Ronaldo collapses like a cheap Malaysian construction project when somebody so much as taps a toe on his precious cleats. You know what happens in hockey when someone takes a puck to the face or breaks a leg? They'll fight the ref to the best of their ability to convince him they're still alright to play. That or they'll beat the ever-loving shit out of the asshole that hit them in the first place. Now that's sportsmanship.

In short, soccer, get over yourself. Just because shoeless kids in Namibia and some wasted Eastern-Europeans think you rule, it doesn't make you any more special than a Junior High School swim meet. And for Christ's sake get some smaller goals. Then maybe the lack of scoring would actually make sense.

OPINION
Adrian Peterson's Career is Over
Jimmy Fraturday
Scrooge
This is fucking hilarious, well done Pockets.
jeremy34
umm did you see when that dude bit that other dude?
Ram Jam

Fuck off, Pockets. I have no better retort than that: you've brought up everything that's annoying about soccer. But, still, Fuck off.
jeremy34
Your last sentence is actually the best point ever made about soccer anywhere
ronjon
i played soccer when i was a kid but i was too good at it because it's really easy and i played goalie and forward and scored a bunch of goals but only when iwas a forward
Rants