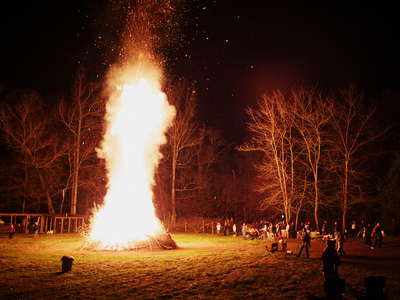 Summer is arriving quickly and everyone knows that the cornerstone to a good summer night is a real dudely, huge fire. If you have an enormous fire you’re pretty much guaranteed to have an awesome night. I’m not saying your crew will definitely devolve into a bunch of people dancing around the fire, but it sure as hell could under the right circumstances. Booze can't hurt, which is even cooler because some alcohol can turn into its own kind of fire. All things considered, if you want to be the coolest dude at this fire you should be the one who built it. This installment will walk you through the basics of a Smokey the Bear approved campfire making, don’t think we're gonna hold your hand, we know where your hands have been.

We’ll start by discussing what things a fire needs, then what you should do with said things, and just like that you’ll be off to the races and building fires left and right. Disclaimer: only practice your fire building skills outdoors, indoor fire building is generally frowned upon with the notable exception of fireplaces. Fun fact: placing a bear rug next to a fireplace is guaranteed to lead to Hollywood-style sex.

Fire needs three things to... you know... burn, be a fire, etc. Fuel, air and a spark, when all three of these things come together—POW!—you have a fire. Well usually it goes a little slower than that, there generally is not a “pow” at the basic level of fire making, that comes later.

First we’ll address the fuel, which can be literally anything that burns, but for our purposes wood is best. Dry wood is even best-er (minds out of the gutter gentlemen), try to avoid the morning type or anything that is clearly wet or was recently living. You can usually tell because it snaps easily and feels dry. Start by gathering some leaves, paper, or if you can get your hands on some, birch bark. Then keep your eyes open for lots of little twigs, less girthy than a pencil and about eight inches long, (a real eight inches, not what you tell girls is eight inches), the more the merrier with these. After that you’ll need to get a good solid handful of stick in the size range of flaccid to erect penis, or about your thumb. Last get some logs about the girth of your wrist, and some that are bigger. It sounds like a lot, but if you try to start your fire before you get all your materials, it’s just not going to work, you’ll be rubbing and rubbing and rubbing sticks together and suddenly realize you forgot the very crucial paper and have failed as a fire builder.

Now that you have your fuel everything else falls nicely into place. Step two is construction and the insertion of air into your fire. Lucky for you air is everywhere—actually everywhere. All you have to do is make sure some of it is getting to your flame. When you start building your fire, there are a few tricks you can utilize to cram some air in there. One of the easiest methods is to build a teepee out of little sticks around a heap of dry leaves. Figure out which direction the wind is coming from, leave a little door open on the teepee, and you won’t have to put in any effort getting air in; this will save your blowing abilities from being needlessly wasted on the fire. Around and over the little teepee you should build a bigger one out of the thumb girth sticks. These will light once the smallest ones get going real hot. Finally, take your biggest logs and build a Lincoln log style sort of box cabin around the teepees. And just like that you’re ready to light the sucker up.

Now comes the fun part: the flames and other burning stuff. Take your matches, yeah matches; nothing says dudefest like being able to light a sweet fire with a book of matches. Trust me, chicks dig guys who light fires with matches. Anyways, take your lit match (I’m assuming you can light a match—if not, stay tuned for a how to light a match guyde, just don’t hold your breath) and light a couple of the leaves that are all the way in the center of the fire assembly. Keep lighting until the flame gets real close to your hand then just toss what ever is left into the center of the leaves. At this point you should be good to just watch everything go up in flames, but you may need to put your lungs and blowing talent to work occasionally. Have some more small twigs and leaves on hand just in case. Usually this format will work right off the start but sometimes it runs out of small fuel to quick and needs to be replenished, like when you need to take a snack break during a marathon bang.

Congratulations new fire builder! You now know how to start working sized and responsibly built campfires, yawn. This is the point where I point out that for safeties sake that you should never build a fire bigger than your fire pit and you should always have a bucket on hand to douse if anything gets out of control and all that safety jazz. Remember fires are hot, like hot hot and can seriously injure you, if you’re a little bitch that is.

OPINION
Vending Machines Are The Most Out-Dated Technology
Joe Kennedy
James
I like me some fire
The Jocker
Burn baby burn!
Guydes