I fooled you. I fooled you all. I fooled the entire Internet. All of you totally remember my Guyde to Bulking Up; well here's the thing, I'm not a bulked up dude. In fact, I'm slim as all hell. You remember the picture in that guyde of that really skinny dude? "Do you look like this?" That was me! As you can probably tell from my bio page, I'm Dudefest.com's Real Life Stick Figure. I've successfully fooled all of you into thinking I somehow know how to get swole.

I'd like to make it up to you guys though, since I know you are all incredibly hurt by my deceit, and the fact you're down four payments of $19.99. No, I'm not going to return your money—I can't return the solar-powered jet ski you've allowed me to buy—but, I can give you advice about a certain aspect of fitness of which I'm incredibly knowledgeable: being thin. I've been thin all my life; When I was born I was over two feet long and weighed about five pounds. I was a weird looking baby and toddler because it looked like someone had vacuumed all of the adorable baby fat out of me. Nowadays, I tell people that despite being 6'3", I weigh 120 pounds, and THEY DON'T QUESTION IT. Suffice to say, I'm a skinny ass mofo, and I'd like to help you join the club. 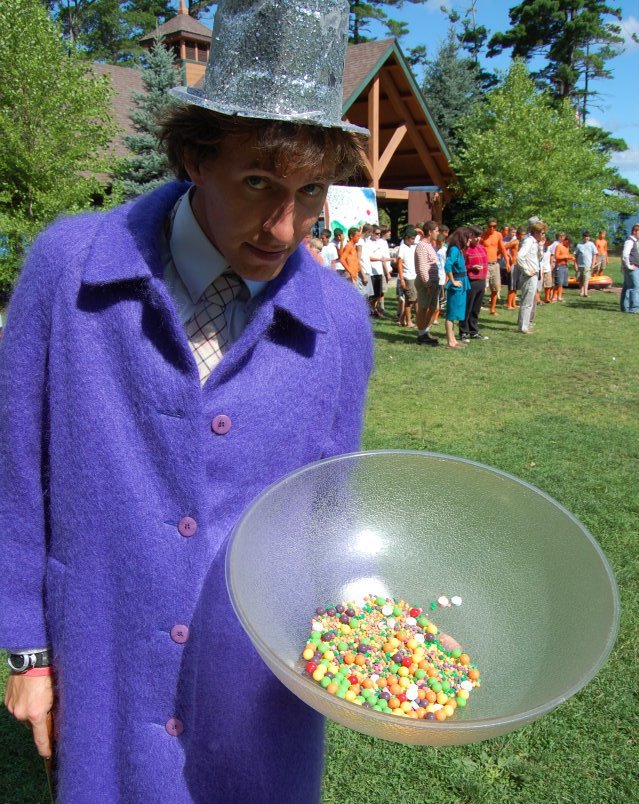 My club is in my van, and new members get candy!

As with the Guyde to Bulking Up (which again, I fooled you about—go me), I'll guyde you through changes to your lifestyle, sex life, diet, and exercise routine in order to help you reach my level of slim.

This is arguably the toughest change you'll need to make. In order to lose weight, you're going to have to become, like, the coolest dude ever. Every time you enter a room, everybody's got to be all, "Oh sweet Joe's here!" and you've got to be all, "Hey everybody!", pointing your fingers like they're guns. Make sure you're constantly cracking jokes that everyone finds hilarious and telling sweet stories that everyone finds intriguing. Be the guy who every dude wants to be and every chick wants to be with. Like I said, it'll be difficult, but with a little practice, a dash of confidence, and a smile, you'll be losing weight in no time.

Sex is pretty irrelevant to being skinny—it happens when it happens—but in order to be consistent with my other guyde, I've decided to keep it. So, I'll take an intermission from the article to talk about penguins. Hopefully you guys have heard of penguins before, but if not, check them out on Wikipedia. These things are hilarious. They're birds that don't fly, and they don't even walk, they waddle. If you'd like to see some you can probably search for them on YouTube or head to your local aquarium. You can also get your own pet penguin according to this "very new site" that hasn't received any awards yet but would be delighted if you'd offer them one. I submitted "Most Outdated" to them, but it doesn't seem like they put it up yet.

To slim down, it's important to follow the correct diet. My life has been filled with eating whatever I'd like, and to get thin, yours should be too. Want to eat only meat for dinner? Do it. Want to have a bacon burger—to clarify, a burger that is made of ground bacon? Do it. Want to drink a gallon of milk each day for two months? Do it. If you've been struggling with sticking to a diet, or your diet hasn't helped you get as thin as you'd like, then clearly you're doing something wrong. And even if you have been on a kale-and-cabbage-five-times-a-day diet that has been working, take it from someone who's been skinny his entire life, you can have a Big Mac every once in awhile. Or every day for a week. It really doesn't matter.

In order to get thin, you can obviously take the traditional route and run 30 miles a day until you can make it up a flight of stairs sans heart attack. But that could take days, or even weeks, to see any visible improvement. I'm not suggesting that the best exercise is no exercise, as I did with diet, because frankly, that would be ridiculous. Exercise is certainly necessary, but you need to expand your definition of the word "exercise." Exercise is simply body exertion for the sake of developing and maintaining physical fitness (this is Merriam-Webster talking, not me), meaning that as long as you get up to pee in the middle of a twelve hour Law & Order: SVU marathon on USA in the name of fitness, you're well on your way to looking like Gandhi in his prime.

I hope you're ready to look slim and fly, fella, because right now you have all the knowledge necessary to lose enough weight for the both of us. You'll finally be able to proudly carry the moniker of "skinny fuck." Now go out and turn that fat into muscle, that flab into slab, and those rolls into packs, and start looking like someone who might only have to purchase one ticket on an airplane.

OPINION
Vending Machines Are The Most Out-Dated Technology
Joe Kennedy
skeptic
I have a feeling that a lot of this stuff WILL NOT help me lose weight.
Guydes