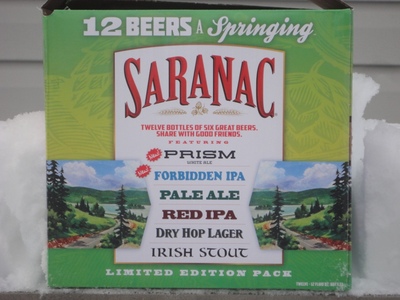 I love variety 12 packs. You get to try several beers and you probably haven't had at least one of them before. These are great for columns because I only have to make one purchase to do sufficient "research" to hit my minimum word count. I haven't seen a variety twelver since I moved to Brooklyn. I needed a couple of months to realize that I had taken them for granted.

It gets worse, I haven't gotten my hands on a Saranac in general, much less a seasonal variety pack. Those were my go-to for a long time. Saranac may not make the best beer, but their variety packs are unrivaled. Why? Six beers instead of the usual three or four. Of those six choices, one will probably be gross. You're going to want to pawn this one off on a friend. DON'T. That oddball is your responsibility. Unless of course someone requests it (unlikely if you don't have weird friends). This is the toll that you have to pay the troll.

If you're asking why I voluntarily put myself through that, the answer is the other five brews. You're guaranteed a few old favorites from the Adirondack Trail Pack, one of their numerous I.P.A.'s (Standard, Red, White, Legacy, Forbidden, Pina Colada—only one of those is made up), or something from last year that they brought back (just made the mistake of checking out their website and I'm filled with curiosity about how a Ginger Pale Ale tastes, that's a toss-up right there).

For every gnarly, fucked-up mess of a lager there is a genuinely exciting experiment or new variety in a pack. Additionally one of them will be exceptionally 'meh' tasting (lookin' at you Kolsch), you are allowed to pawn this one off on a buddy.

So you can always use one of those as motivation when you're sucking down a Caramel Apricot Smoked Porter/ IPA hybrid or something equally ridiculous sounding. That might even already be a real beer. And I'd probably try it if you offered me one. But no one's offering Saranac free or otherwise down here. And that's a God. Damn. Shame.

I had the ginger pale ale. Very refreshing. The ginger isn't overwhelming, but if you aren't a fan of it, you won't like the GPA
jeremy34
I always pawn off the odd man out. Sometimes you get stuck with like a blueberry beer, and if you can find someone who actually wants to drink that, you should give them all the blueberry beers in the world.
Beer Musings