Where Dudes Come To Read
MUSINGS FROM OUR CHEAPSKATE BEER SNOB

I like to experiment with alcohol, and occasionally I run experiments that are different than studying alcohol's effect on my brain. In this case, I gambled with some decent gin and ended up with 4 half liters of flavor-infused gins. The process for creating your own flavored alcohols is exceptionally easy. You only need three things: an alcohol of your choice, fresh ingredients, and time. You'll also need a glass container to hold all of the ingredients, so I guess I lied. 4 things. Ok, cool.

You're allowed to use whatever alcohol you'd like but the most obvious choice is vodka. Because vodka is supposed to be tasteless by definition (it's a neutral spirit, and is essentially what many of the other alcohols, including gin, start out as) flavoring it is important and easily done. For more complicated spirits, steeping fruits, veggies or herbs, could actually ruin the carefully crafted flavor that the distiller had hoped for. So, vodka is a good place to start. Whatever container you use, make sure it is glass. Alcohol's effect on plastic bottles and vice-versa could alter the taste of your creation, which is no-bueno. Simply select your fruit, vegetables or herbs, and then activate them (by slicing the fruit or vegetable to release their juices and sugars which give them most of their flavor), or in the case of many herbs: crushing or slapping them). Drop the activated ingredients into the alcohol, close the lid and let it sit in a cool, dark place, like a cabinet (preferably the liquor one). The rule of thumb is the longer you let the ingredients sit the stronger the flavor will be. After a few days you'll actually be able to see the color of the liquor change, which is a good indication that your product is on the way. Go crazy with the combinations, you'll never know what you might get. I made 3 different kinds of flavored gin: cucumber, citrus, and cranberry mint. 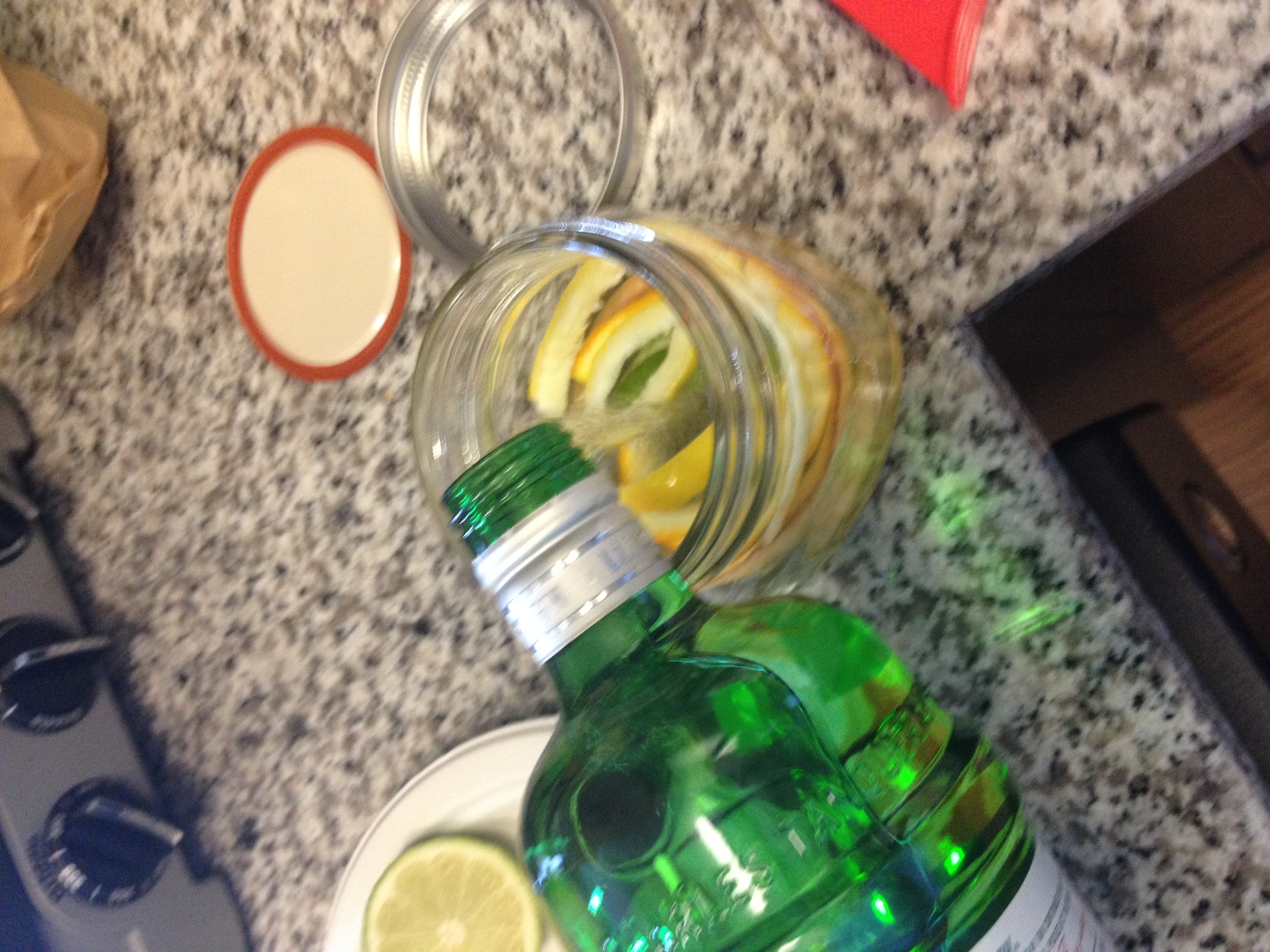 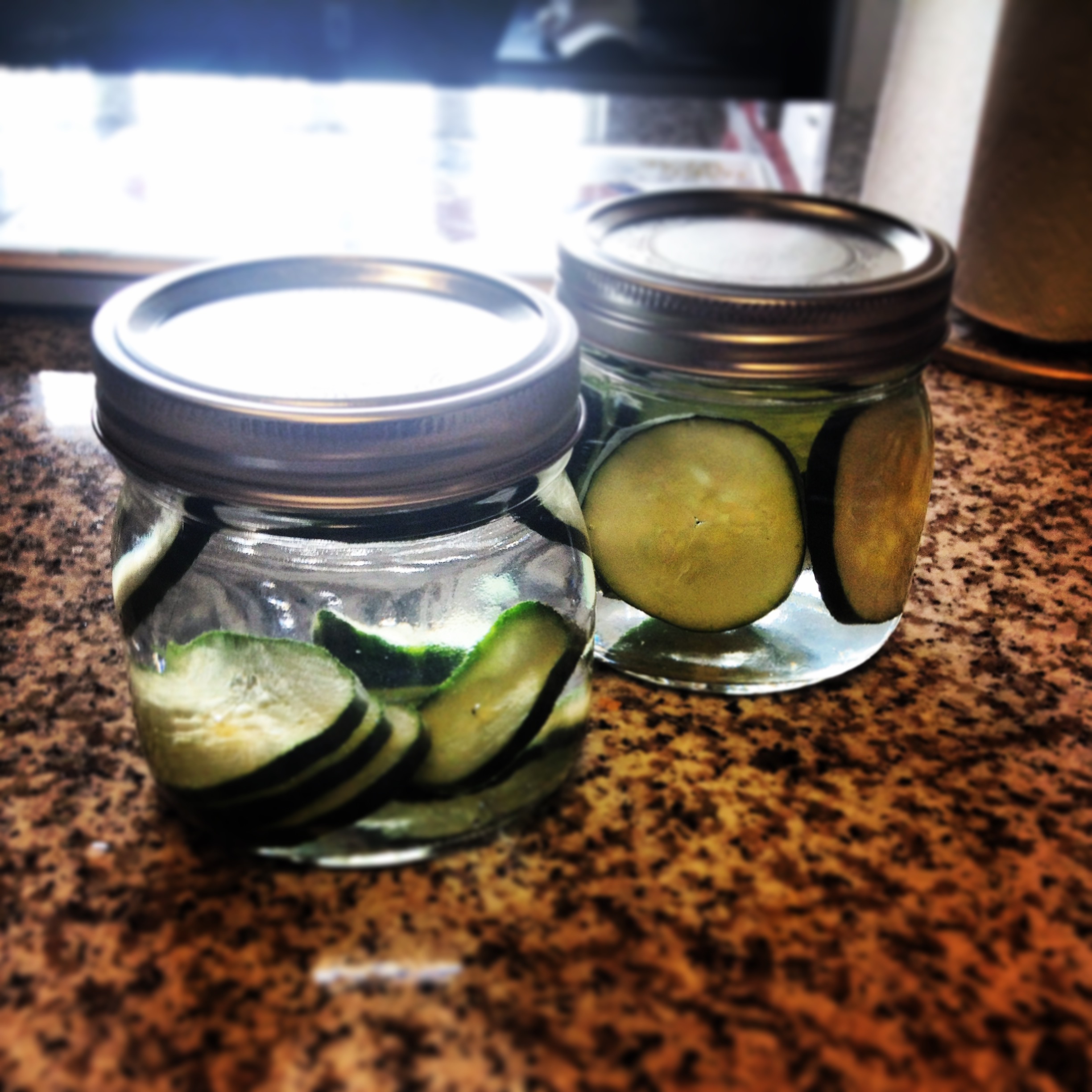 This one is the most straightforward, and all you need to do is make sure you wash the cucumber, and use fresh slices of cuke with your alcohol. I tried this one out with Hollywood and was pleasantly surprised by the flavor. Hollywood drank it straight up as a martini and used the steeped cukes as a garnish. I chose to try it as a G and T. The flavor is more complicated than the usual G and T with cuke, and the flavor spends a longer time on your tongue, giving it a slightly heavier flavor than just garnishing a normal G and T with a cuke would. 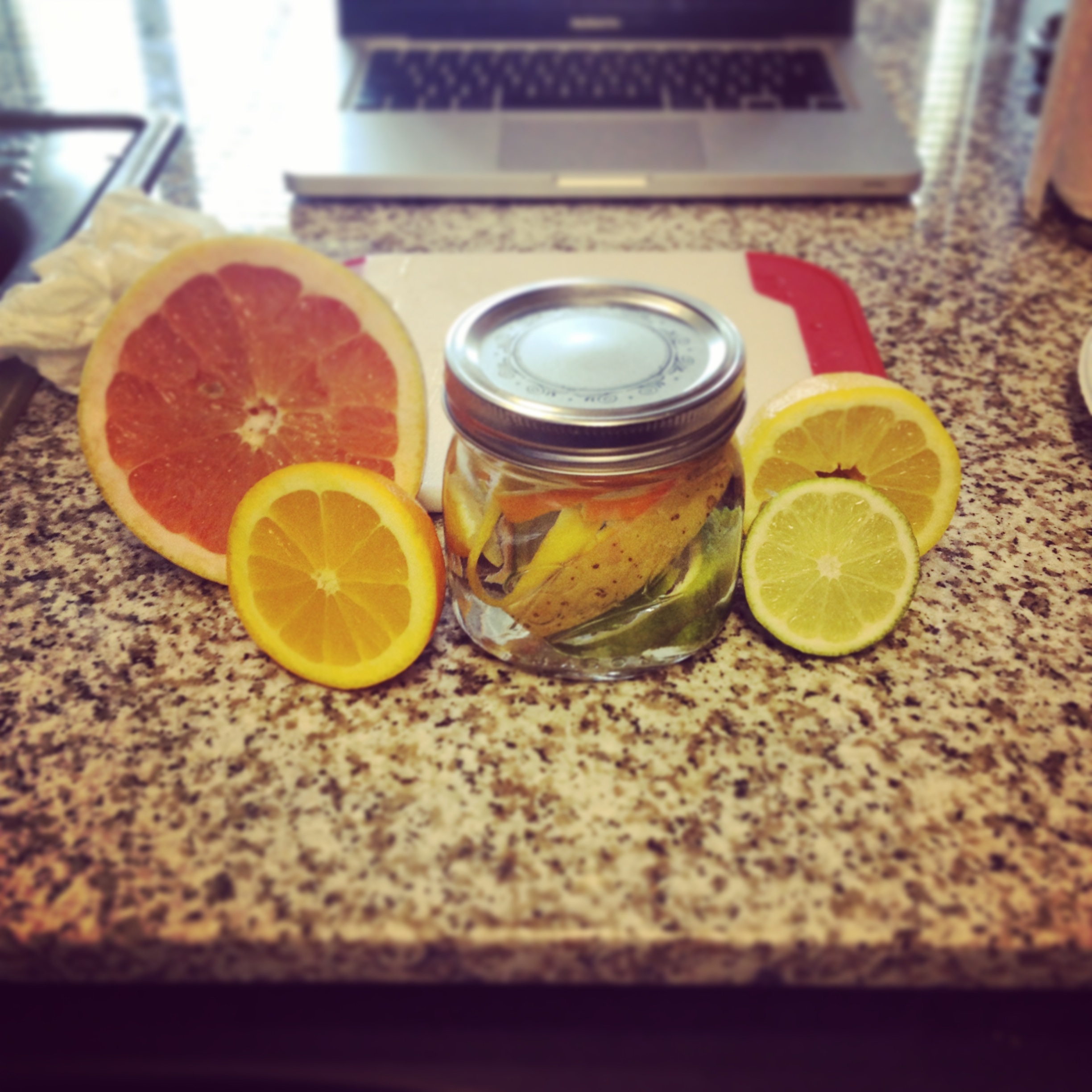 This required the the most amount of manual labor and the least amount of time to infuse. Citrus fruits have very strong flavors, so the amount of time it will take to make the flavored booze will be shorter than ingredients with a more mild flavor (such as the cukes). You don't want to put any of the actual fruit into the booze; that will be wayyyyyy too much flavor, and ultimately you'll get a diluted product because of the fruit's juice. Instead you want to use the rind of the fruit. I used a slice of rind from a lime, lemon, orange and grapefruit. 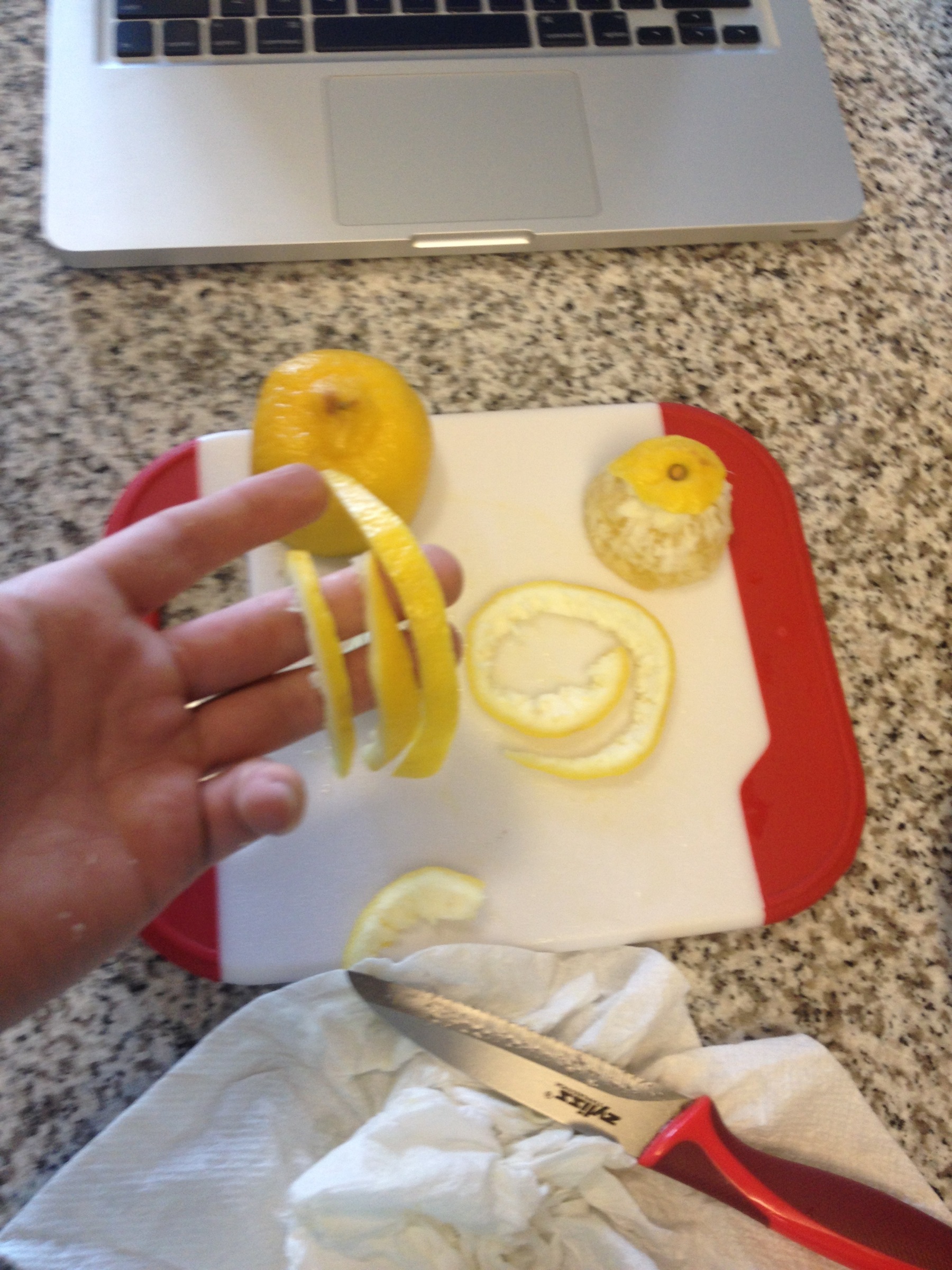 And I didn't even cut myself once

The lemon and lime flavors blend well together, and the orange provides a sweeter flavor to cancel out the sour from the lemon-lime and the tart from the grapefruit. All together it makes a delicious citrus blend, which was very good straight up. I also made G and T's with it and garnished them with a lemon wedge. This G and T had almost no booze flavor and tasted like a fizzy lemonade. If you have someone who doesn't like the taste of gin, this is a way for you to help convince their stupid taste buds otherwise. 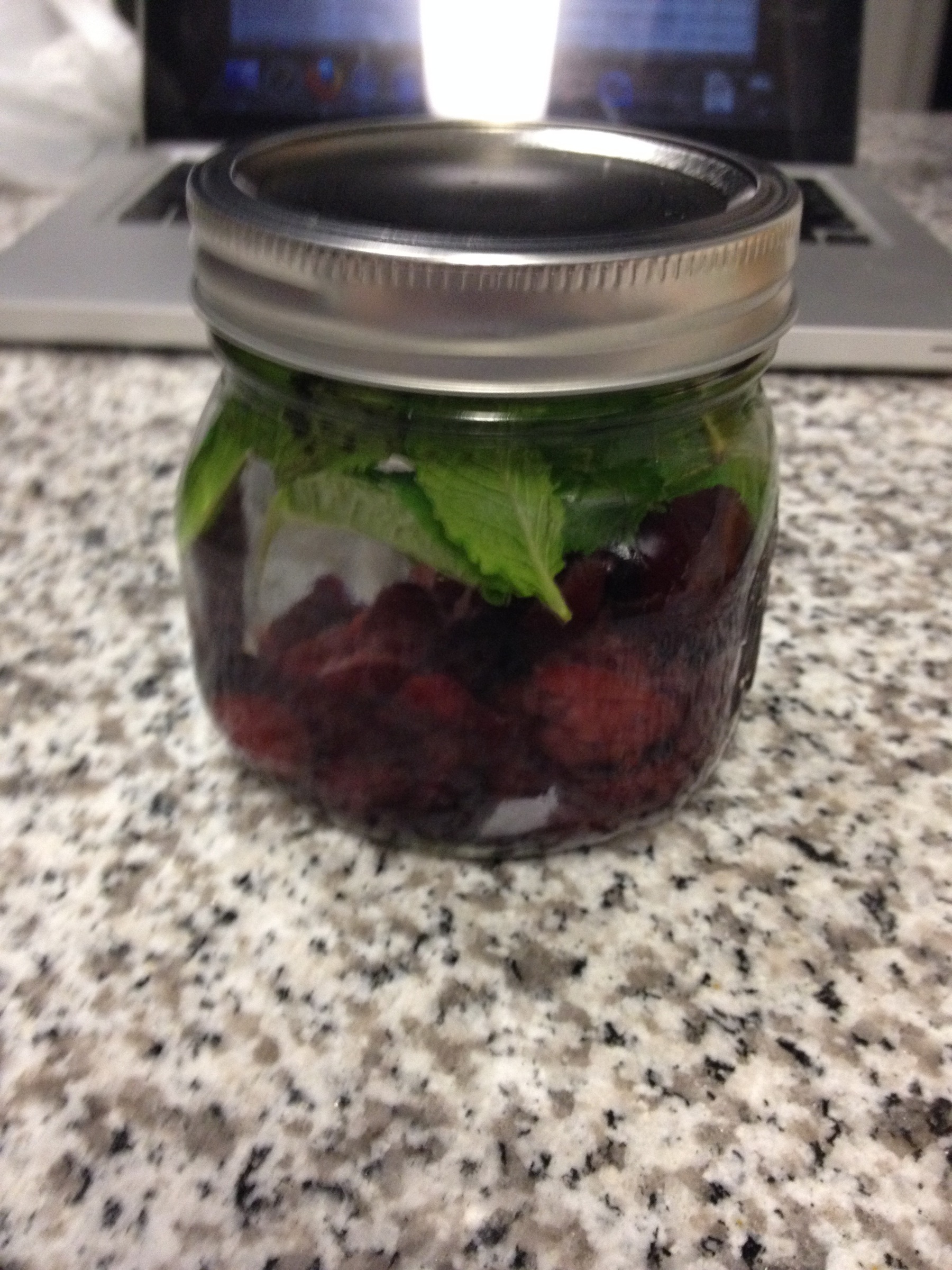 This batch was the most difficult to make because cranberries are not in season and trying to find fresh cranberries is damn near impossible. So I had resort to the next best alternative. I bought canned cranberry sauce. It was the kind with the whole cranberries in amongst the gelatinous mess, so I got out my colander and essentially took Ocean Spray's hard work and washed it down the drain, leaving the whole cranberries behind for my use. I dropped them all in and then moved on to the mint. Mint can be tricky to work with. For those mojito lovers out there, you know how easy it is to get little bits of the leaves into your mouth because they were muddled earlier on. There is a better way. Muddling releases all of the flavor from the leaves by breaking the capillaries which carry the sugars throughout the plant. These sugars are what gives mint its flavor. Muddling is an extremely effective way to break them, but it isn't the only way. A much easier and cleaner way to activate mint leaves is to put them in one of your palms and them slap them hard between your hands. You'll immediately smell that the mint has been activated. So I did this with several branches of mint before screwing on the top and letting it sit. In the end this gin was the most amount of work and was the most disappointing. The cranberry flavor never really came out, probably because of the berries I had to use, since cranberries aren't grown or harvested until late summer and fall. The mint was overpowering, which ended up leaving a toothpaste-y after taste. In a G and T this gin was tolerable, but it was not my best work.

I chose Tanqueray 10 simply because (a) its good gin and (b) I had a handle of it and wasn't drinking it very much on its own. I've learned quite a bit from this experiment, and my next project will be making more of the cuke and citrus blend and hopefully being inspired to find the next delicious steeping combinations. Suggestions? Shoot me an email. Now enough typing... it's time to get drunk.

FORUM
Almost Getting Arrested on My 21st Birthday
Jimmy Fraturday
The Jocker
What was the ratio of soak time to drink time? Hopefully it was very high!
Beer Musings