Holy crap. What a week in the never-ending game of thrones that we know as A Fantasy League of Ice and Fire. In this, the seventh week of action, the ante was upped to levels that haven’t been seen since the Red Wedding. I’m talking about a major homicide that violates all the rules of Gods and Men. There is no man as accursed as the kingslayer—not even a kings layer—and there is quite a bit more on the horizon in the Seven Kingdoms of Westeros.

After a rough start of the season, Tyrion has given away all of his fucks and has started talking more shit than anyone in Kings Landing. While he still had plenty of points deducted from his total, he was in three scenes and managed to be increasingly badass in all of them. He is understandably hurt by his family’s actions, but Shae’s betrayal cut him the deepest. The good news is, he saw right through the offer his father Lord Tywin gave to Jaime (50 points). Jaime should have seen through Tywin’s mercy and seen that he was getting everything he ever wanted (his preferred heir back and Tyrion hidden out of sight forever). Things got emotional for everyone’s favorite stunted pervert when Ser Bronn of the Blackwater (350 points) showed up dressed to the nines as he prepared to marry Lollys Stokeworth. Even though Bronn is technically betraying Tyrion by accepting Cersei’s arranged marriage, it doesn’t feel as bad as Shae. After all, just like Tyrion said “Why would you be sorry? Because you’re an evil bastard with no conscience and no heart? That’s precisely what I liked about you in the first place.” They had a cute little best-bro’s handshake before Bronn took off (55 points each).

Another week at the top of the score chart, and a return to early season form when Oberyn rattled off 500 point weeks like Walder Frey’s wives pumped out heirs. With a total score of 2378 points so far this season, and Littlefinger in a distant second with 1630 points so far this season, it is safe to assume Oberyn has locked up the high score for the season—I mean, unless something crazy happens. Like, I don’t know—offering to be Tyrion’s champion? Oh shit, he did that? (100 points) That is fucking stupid, weren’t you listening to Bronn when he explained the only way to potentially defeat The Mountain has a margin of error smaller than the likelihood any of the Stark Children will ever see each other again. 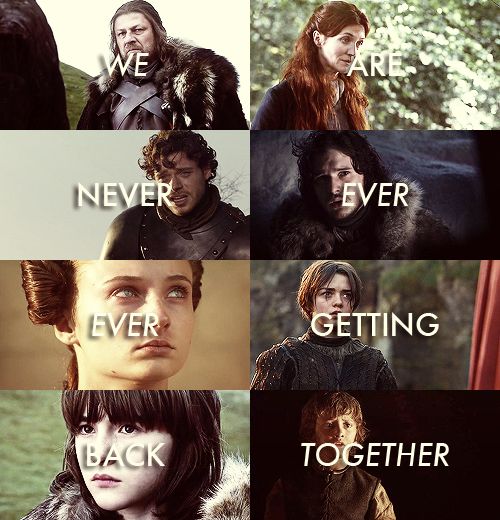 I know I say this every week, but Oberyn gets more intense every time he appears on screen. All of his friends have run out of bubblegum, and if he isn’t chewing bubblegum he’s killing Lannisters and their bannermen. He’s going to start with Ser Gregor the Mountain That Rides (200 points). Oberyn wants justice. And I think he’s going to get it, this show is full of happy endings, right?

While he doesn’t have the highest point total this week, he showed Sansa and Lysa Arryn who has the Littlest Finger in the Vale. He does this by finally breaking free of the friend zone and getting some sugar from Sansa (40 points). But I kinda want to take away some points because right before kissing her, Baelish said in another life she might have been his daughter. That’s gross man. Even for a guy who convinced a woman to murder her husband so they could be together for a few days before he kills her too in favor of her older sister’s 14 year old daughter. Fuck man. Some times I have to ask myself, “What the hell is wrong with George R.R. Martin?” Then I remember, that’s not even that bad compared to the sister rape, wife rape, stranger rape, pretty much any kind of rape other than date (which hasn’t occurred yet to my knowledge). As for Sansa Stark, she might not have an aunt anymore, but she did get to slap that little shit of a cousin Sweet Robin, epileptic Lord of the Vale (-50 points). Killing your wife is pretty shitty, I wish I could take more points away from Littlefinger, but I kinda owe him some money and he says if I don’t let this one slide he’s going to double my interest rate. Sorry folks, business is slow at Dudefest.com these days.

Queen Dany was about to retire to her private chambers, when she finds an uninvited quest, Daario Naharis, America’s favorite weirdo sellsword (330 points). He has a simple request, let him go kill some motherfuckers in the name of his one true lust—I mean love—one true love. He continued to make it abundantly clear that he only is interested in killing Dany’s enemies (really killing in general) and banging beautiful women. The problem is, they’ve taken the city and no one is more beautiful than Dany (as evidenced by the dress she wore in the next scene when she was talking to Ser Jorah, hot damn). 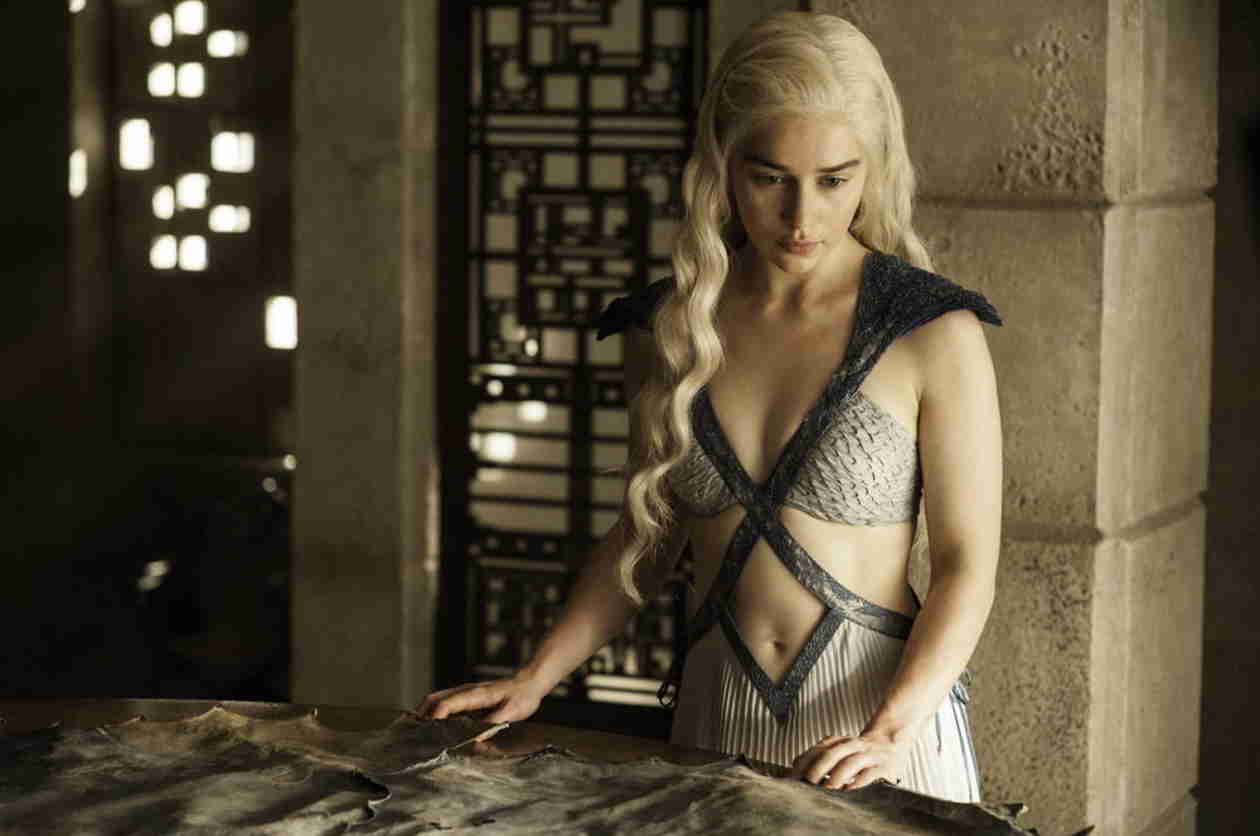 Almost made up for the lack of a Khaleesi Sighting

I’m getting ahead of myself. Dany recognizes that Daario needs something to do. So she permits him to go kill every single remaining Wise Master in Yunkai. But first, it’s time to bang. This episode had the most release of pent-up sexual tension than any other to date (death to the friend zone, unless your name is Jorah of course). The next morning, Jorah catches Daario leaving and just to rub it in a little, Daario walks away saying, “She’s in a good mood.” Well done Daario, sucks to be you Jorah.

I could go on but I know you just want to check out this week’s scores, so here you go… 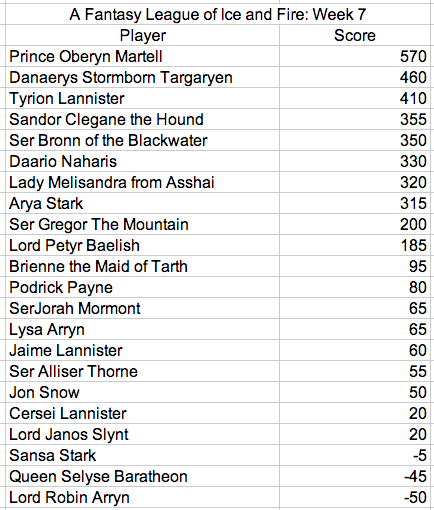 And now the Season Leaders... 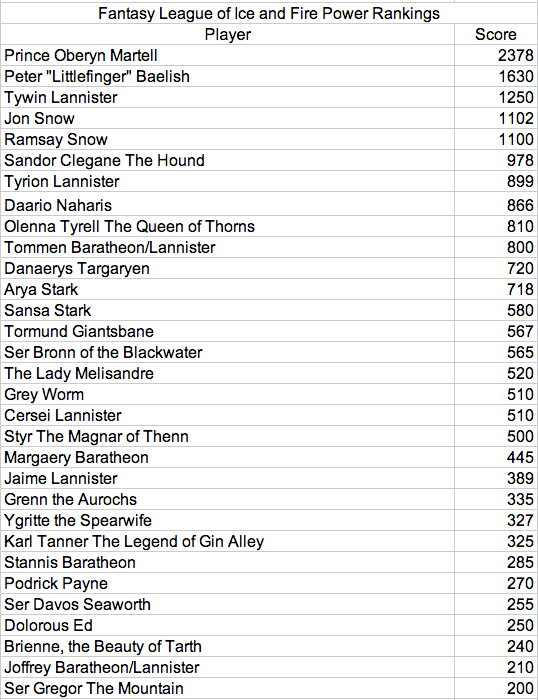 Stay tuned for the Fantasy League of Ice and Fire All Star Teams next week!

Bronn gave me some points this week—finally. Thanks Bronn!
John Roberts
You're a Fantasy Douche of Ice and Fire. Does anyone hate this guy more than the rest of the writers combined? If Dudefest.com was smart, they would get rid of this cocksucker.
copycat
Not even I can copy that comment.
The Score