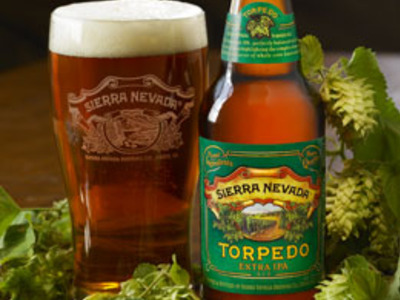 Sierra Nevada is a special brewery. Not because their beers are exceptionally amazing (they are all very good and at worst above average), but because they are so OG. OB would be more accurate. When these guys were getting started in the 80s, beer was in a sad, sorry state. There weren't "craft beers" yet, there were just the monolithic megabrews (Bud, Miller, Coors, etc.) and regional imitations. There's a reason everyone went bonkers over Heineken on Mad Men: American beer sucked.

I think we can all agree that the amendment that appealed Prohibition is the second best repealing amendment (after slavery of course) in the whole constitution. There were only 100-ish breweries in America when Sierra Nevada got started. If craft breweries were a species of animal, environmentalists would have been freaking out trying to list them as an endangered species. That would prove unnecessary, considering the current population is estimated somewhere between one and two gazillion craft breweries in the greater Seattle area alone.

It all started with the Sierra Nevada Pale Ale. It was hoppy, which was sexy at a time when Jessica Rabbit (of WHO FRAMED ROGER RABBIT fame) had made hoppy and sexy synonymous with each other. While it may not be the best Pale Ale out there, it dominated every other beer at the time. It is largely responsible for the popularity of Cascade Hops which had previously been a Northwestern US specialty/open secret. The Pale Ale led to Torpedo Extra IPA. This IPA is probably one of the first IPA's you will try growing up. It's everywhere and it's delicious.

Before we get down to how it tastes, let's talk about where that name came from. Torpedo is an awesome name, I always think "Damn the torpedoes" whenever I crack a Torpedo open. I love pretending to be a sea captain (a tugboat captain would be even better. I realize there isn't much demand out there for tugboat captains anymore, so I would use my nights to run a singles cruise - I'd call it THE LOVE TUG. But I digress...) This badass name comes from the device that the brewers used (coincidentally called the Hop Torpedo) that helps them achieve their special hop aroma. This is a really cool concept, the Hop Torpedo helps them impart more hoppy smells (and you get lots of different citrus and pine notes up in your olfactory with every sip) without adding as much bitterness as other dry hopping methodologies. For those of you wondering what dry hopping is, it takes place after the majority of the brewing process has been completed. The brewers add whole cones of hop to cold beer to impart smell, and improve the head without significantly altering the taste. If you used all the hops from the initial hop and dry hopping stages from the get-go, you would burn your tongue off and not taste again for a year and a day.

So, like I just said, Torpedo smells amazing. The head is drenched in smells that seem to change when you move your nose over a different part of your glass. If you're drinking Torpedo out of a bottle, you're a jackass - go get a proper glass. Unless you're at a festival or something, then carry on. We're talking about a great smelling, refreshing, full-bodied beer that isn't overwhelmingly bitter. It's hazy and tastes like daytime. I'm a big fan. Also, it's 7.2% alcohol by volume. So, be careful kids. I mean adults - kids should stick to malt liquor. You don't want to ruin binge drinking at college by acquiring good taste yet.