We made it to summer, and for a lot of us that means that we finally get a trip or two to the beach. To me, nothing beats getting your feet in the sand, holding a cold beer, listening to the waves crashing onto shore, and feeling the sun rays. However, we all know that the beach comes with a price. We must live in the constant, crippling fear of being torn apart by hungry, man-eating sharks. Make no mistake, if you go into the water, you WILL be attacked. They are everywhere. Don’t listen to the stats that say you’re more likely to be struck by lightning than be attacked by a shark, because they're inaccurate. Anyone not in the water has a zero percent chance of being attacked, which skews the results. Once you enter the blue abyss, your chance shoots up to 85%, at least. Don’t worry too much, though, because if you’re smart, you can survive. We here at Dudefest.com have the answers you need to stay.

I know what you’re thinking. “I can dip in the water for five minutes, there probably aren’t any sharks around at that exact moment.” Wrong. Lesson number one: just because you don’t see them doesn’t mean they’re not there/they don't see you. They are and they do. Trust me, they can see you. The water is filled with sharks; studies by The Kennedy Research Center have estimated that there is one shark for every ten square meters of water in the ocean, minimum. Even many river systems have man-eating sharks lurking in them. With so many sharks, the competition for food is insane. Tiger sharks even eat the tires and license plates off cars that they drag into the water. If they’re eating rubber and metal, they sure as hell won’t have a problem with eating a fat kid.

Now if you’re swimming in the water, there’s almost no way you’re going to avoid an attack. The water isn’t exactly what humans were built for, so sharks have over 400 million years of evolutionary experience on us. Basically, there’s no fucking way you’re going to outswim or outmaneuver any shark, much less a Great White. What we can do is outsmart them. Humans are, on average, ten times smarter than your typical shark. The one exception is the nurse shark, because they had to get an advanced degree. 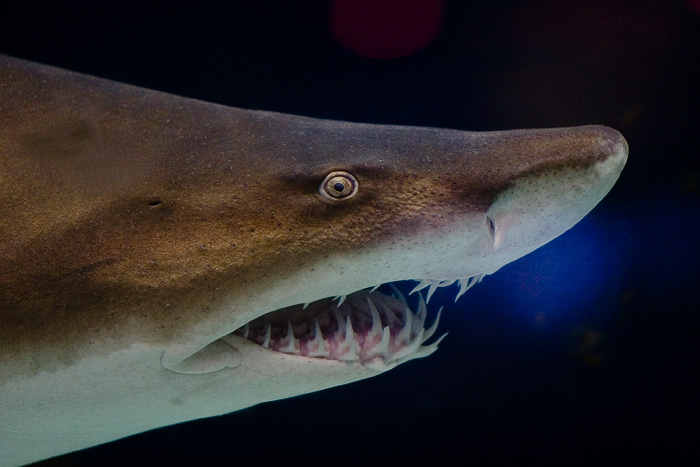 Nurse Shark: Smarter Than You

So, how do we outsmart the sharks? There are a few ways. The first strategy that comes to mind is to swim out further from shore. This may seem counterproductive, but bear with me. Sharks mostly attack people in water less than 3 feet deep, so they’ll be confused if you go out too far. They might even think you’re a weird, different shark and leave you alone. Now all you have to worry about is the strong possibility of drowning or being pulled to the black depths by a giant squid. If you want an option that will allow you to eventually return to shore, consider taking a larger, slower friend/acquaintance with you into the water. This is a classic strategy for survival: you don’t have to outswim the shark, you have to outswim the other guy. Sharks want to eat fattier foods anyway. If you’re worried about the moral implications of putting someone else in harm’s way, then I guess you could replace your friend with a couple of uncooked steaks or a rack of ribs. It’s sad to waste such good food, but the bloody meat may just distract the shark away from you. So, the best way to avoid sharks is to bring raw bloody meat into the water with you. Makes sense to me.

The rules change a little when you’re on a surf board. It’s well known that surfers are prime targets for sharks, like that girl who got a movie deal from a shark attack. This is because a person on a surf board looks suspiciously like a seal, the eternal nemesis of the shark. Even though you’re more of a target, the board will make you faster in the water, which is a plus. Maybe, just maybe, you can beat a shark to shore if it’s having a slow day. You can also try to out-surf it. Sharks get stoked for people who can shred gnar on those nectar waves, so surfing well enough will win their respect. The downside is that they especially hate novice surfing and will rip your head off the second you fall in the water. So, if surfing isn’t your strong point, you can just inject your surfboard with poison. Some will say that this is “unethical," “inhumane," and “straight up illegal for poisoning an endangered species” in some cases, but at least you’re still alive. If the shark bites the board but misses you, you might just make it.

Things get even worse if you’re miles offshore. This would happen after a shipwreck or plane crash, or just being left out at sea like that movie OPEN WATER. I know I said earlier that being in deep water is an advantage, and it still is. However, if you’re out there for long enough, the sharks will catch on to your ploy. If you see any wreckage that you can climb onto, do that. At least you’ll be out of the water. If not, then sorry. You’re shit out of luck. Your only hope now rests with dolphins, the assholes of the sea. They have been known to fight off sharks and pull people back to shore, so some dolphins are true saints. Then again, dolphins have also been known to sexually assault people, so don’t put too much trust in them. Dolphins are just waiting for the right time to take over the world anyway. Just hope you never find yourself in this position. No advice article in the world can save you.

With this info, you should be more prepared to survive the inevitable shark attack. Just remember, though, the best way to battle shark attacks is the same as the best way to battle pregnancy- abstinence. Just don’t ever go in the water, any water, for any reason at all. Don’t even take baths. Move to the desert. Never fly over the water. Never take vacations to the beach. Don’t travel in boats. Don’t even drink water. Then, then only time you’ll have to worry about sharks is when a rogue tornado picks up hundreds of angry great whites. If this happens, just go stand in an open field somewhere and accept that the world wants you dead.

Henry "That's Not My Name" Henry cannot confrim nor deny that any of this is true, or even advice.

OPINION
Vending Machines Are The Most Out-Dated Technology
Joe Kennedy
Marlon Brambo
Truly eye opening article about the dangers of the sea. Thank you so much for the information about how lethal sharks actually are.
Guydes