Drama Has A New Home, And It's Not Here
MUSINGS FROM OUR CHEAPSKATE BEER SNOB

I recently took my first trip to the West Coast. My cousin was getting married in San Diego, so the whole family headed out to California. I was excited for the wedding (more on that later) but I was equally (if not more) excited to get my hands on some of the local/west coast beers that aren’t available in New York.

The day before the shindig, we had all afternoon to do whatever we wanted until 5 when we had to get ready for the rehearsal dinner. I decided the best way to use that time was to get drunk all over San Diego. I went wandering in the city’s Gas Lamp Quarter (where, according to my ultimate dudefest friends, the “breeders” hang out). One place caught my eye called the Yard House. Their sign advertised rock’n’roll and more beers on tap than any place in the world. I didn’t bother counting but I was definitely impressed with what I saw. 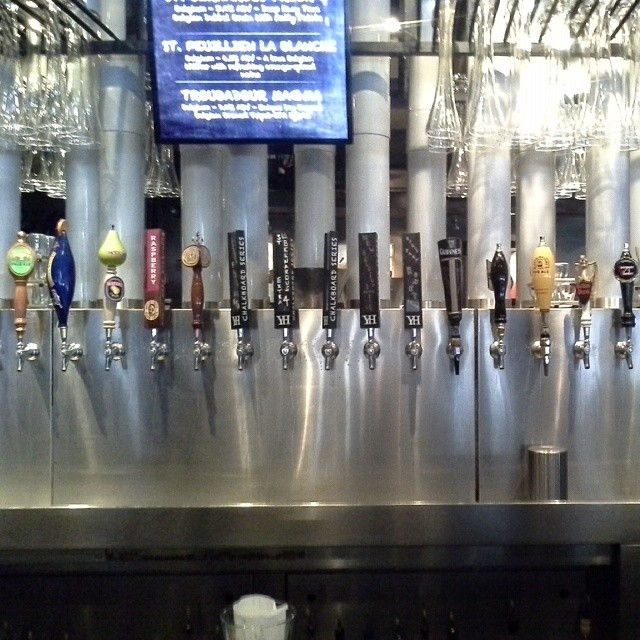 Maybe 1/10 of their total selection

I took a seat at the bar and looked up at a board that listed a small portion of their beer menu. My bartender (Matt) gave me the full list. It was contained inside a leather case, and was thicker than most of the books I’ve read since graduating college. I was immediately overwhelmed and asked Matt for a great local recommendation. He handed me a Stone Sublimely Self-Righteous Black IPA. Stone is an amazing brewery from Escondido California, their specialty is knocking you on your ass with some crazy complex hop palettes that burn lesser men's taste buds off. 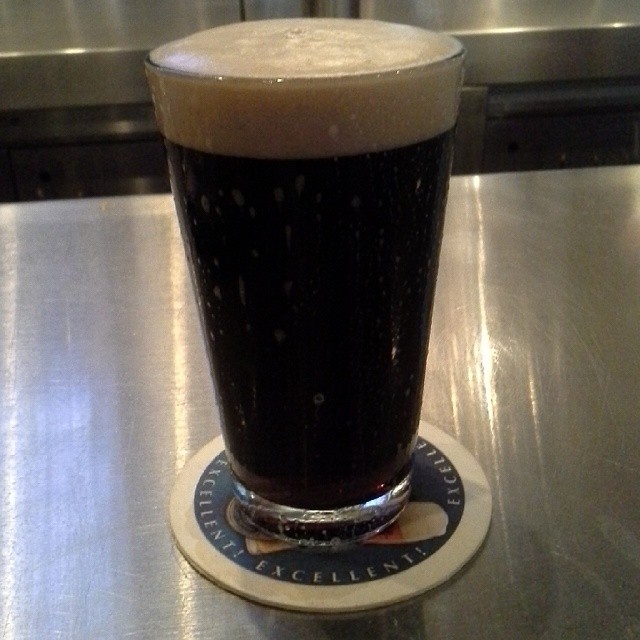 You should know something about West Coast breweries. They treat hops like sorority girls do vodka shots. They use a lot. Pretty much all the time. A safe assumption is that any beer from the West (especially the Northwest) not labeled as an IPA could probably pass for one on the East Coast. What I’m trying to say is that this black IPA kicked my ass and I loved every second of it. We’re talking about 8.7% alcohol by volume. A thick head that captures all the aromatics and creates a great bouquet throughout your pint. And most importantly, an inky black, full flavored body that had me making so many noises, the people sitting near me became uncomfortable.

Even better than all of that is the name: Sublimely Self-Righteous. These guys know how fucking good they are. And they want to let you know before you’re even finished ordering. I love when a brewery has an attitude (whether it be Saranac’s Adirondack Mountains theme, Magic Hat’s Vermont Mysticism, or Sam Adams “We’re Here for the Craft Beer Virgins” stance). Stone embodies this swagger perfectly. If you have a "Type A" personality, this is your new favorite family of beers.

Speaking of Stone, let’s move onto one of their flagship brews: Arrogant Bastard Ale. 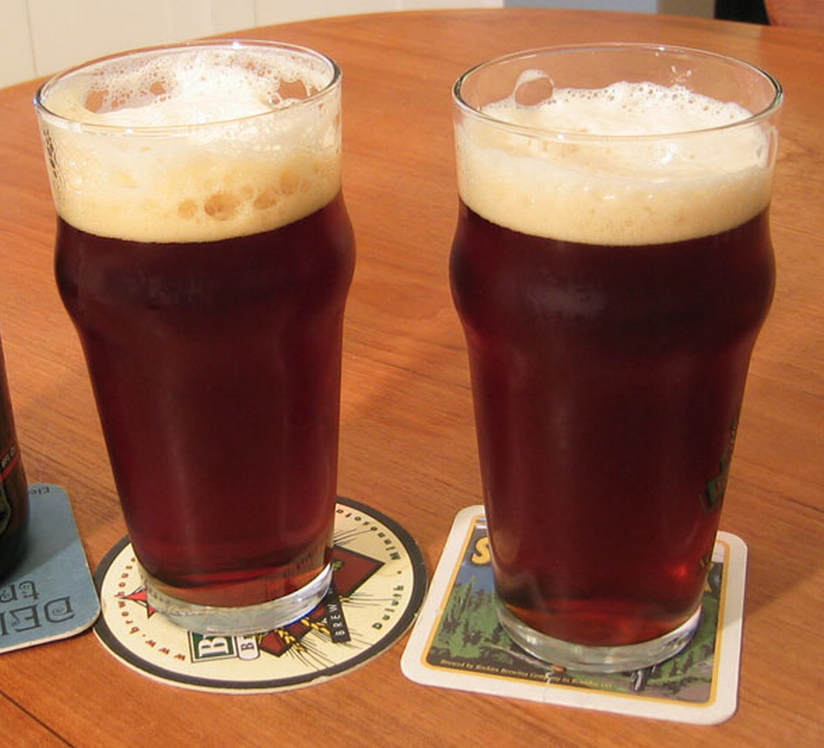 Forgot to take a picture there, needed to find it again - not that I'm complaining

The brewers want you to know what you’re getting into with their tagline: “You’re Not Worthy.” If you have ever said “PBR is my favorite beer," you actually aren’t worthy. If you’ve cultivated a bit of an appreciation for craft beers, you are aware that you’re trying a beer that wants to cause you physical harm. I followed up my Sublimely Self-Righteous with one of these bad boys (because it was only 7.2% ABV and I wanted to slow down a bit) and found myself inexplicably buzzed.

This is a special beer. For a long time, it was one of my go-to “Special Occasion” beers along with Rogue’s Dead Guy Ale and Great Divide’s Yeti Imperial Stout. I was thrilled that it was available literally everywhere I went in San Diego. The only downside is I think I burned some of my taste buds off. This beer has been kicking around since the late '90s and is brewed with a proprietary mix of hops that the brewery won’t divulge no matter how many times I call and ask nicely. Give this a try if you don’t have to operate any machinery heavier than your phone.

After two beers, I was having a grand old time and wanted to get adventurous. So I asked Matt to hook me up with a pint of the Mission Shipwrecked Double IPA. Well, actually I asked him for a Shipwrecked Mission Double IPA, but he knew what I meant. 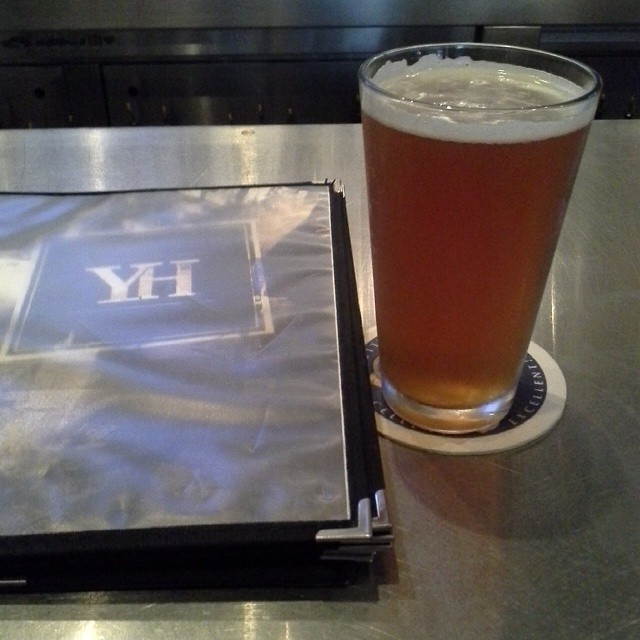 I make a lot of right decisions at the wrong times. I was already rocking a great buzz when I decided to order a double IPA with a massive 9.2% alcohol by volume. Shipwrecked has a great thing going for it that other IPAs lack: you can drink it like a regular beer. The malts offset some of the crazy bitterness and make the whole beer more drinkable. About halfway through this beer I stopped taking notes and tried to convince Matt to turn his customers onto reading this site- he seemed open to the idea but I wouldn’t consider myself a “reliable narrator” with this mix of beers in my system. This was the impetus for leaving the bar because I knew it would take me a super long time to make it back to my hotel after finishing it.

I was really tempted to order another as soon as I was finished, but I held off and headed home (or at least tried to). I made several stops at a few happy hours. My first stop was because the door guy tricked me. He complimented me on my Magic-era Shaq jersey and chatted me up for a minute before slyly letting me know all beers on tap were $3 - that's absurd. I didn't even realize the name of the place until I walked in: Coyote Ugly. Let me paint you a word picture, they sold multiple styles of panties and you could do bodyshots off the bartenders for $20. I didn't tip her, I threw a dollar bill in a mixing cup between her legs while she stood on the bar. Would that weird you out at 4 pm when you're somewhere between half and fully cocked? If so, we have something in common. It took me a solid 5:45-ish minutes to finish the Fat Tire Amber Ale I ordered (my favorite Colorado beer - highly recommended). Good thing it goes down so smooth, I politely chugged it.

I thought I had escaped the siren's song of day drinking, I was wrong. Once again by the person working the door. She told me it was crappy hour. No one had ever been so honest to me before in terms of the service. It turns out for this period of time each day, everyone who worked there turned into a raging asshole. I'm not sure if it was policy or their natural body-rhythm but the service was terrible. I had a Bud Light. In a bottle. Because I did not trust those nasty looking taps.

I got home in time to hold up everybody else going to dinner by 5 whole minutes. I might as well have canceled the wedding as far as they were concerned.