In just a few days Season 5 of Game of Thrones will premiere on HBO (April 12th to be specific). That means you better be getting ready for your draft because its time for another season in A Fantasy League of Ice and Fire. Let's take a look at last year's top scorers and what we can expect from them this season. Here is last season's top 10: 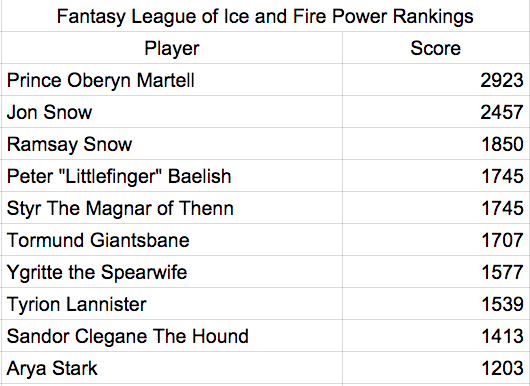 Oh, that wasn't very helpful. Half of these guys are dead or are looking at less than ideal circumstances going forward. Tormund was captured by the Night's Watch after the battle and who knows where the hell Tyrion is going to end up after off Lord Tywin. Other notable deaths last season included my man crush the pansexual Prince Oberyn Martell, Jon Snow's man crush Ygritte the Spearwife, Second half superstar Styr the Magnar of Thenn, and Sandor Clegane is probably dead after his duel with Brienne the Beauty.

The silver lining of The Hound's technically unconfirmed death that occurred off-screen is that Arya is freed up to pursue her dreams of revenge and murder in Braavos. If I had the first overall pick in draft, I would seriously consider taking her first. She's been an All Star the last few seasons with lots of quality killing and zingers and she will only have more opportunities to rack up a massive body count as she heads to what I can only assume is Murder Academy in Braavos.

The safer number one choice in my opinion is Jon Snow who finished 2nd overall in point scored AND managed to stay alive. There will only be more fighting at the Wall this season, the wars in the North are far from finished. Which also bodes well for Ramsay Snow, Stannis Baratheon, and potentially for Tormund if he gets out of prison (likely, he is too talented to be get at the margins for long).

Exploring new territory for us viewers in Dorne, Sers Jaime Lannister and Bronn of the Blackwater are heading into the hostile deserts of Dorne. There will be a goldmine of points here if you are picking in the middle of the 1st round because I imagine Bronn will get a lot of quality kills. Jaime's real value now is in shit talking and solid burns which allows him to score in bunches even with limited screen time. There is also a trio of talented rookies called the Sand Snakes that are expected to stir up trouble for them providing ample opportunities for conflict.

Over in Essos, we will be getting a metric shit ton of political bullshit in every Danaerys scene. I don't see a lot of value in this pick outside of getting a bump from potential excessive nudity and banging. Jorah has been exiled leaving Ser Barristan the Bold with a prime opportunity to score points by protecting the Queen from her enemies and by offering sage and badass advice. Barristan is a solid second rounder and if Dany is still available in the third, I would say go for it (unlikely she is a prime target for being drafted too early as a fan favorite). Speaking of fan favorites, Tyrion remains an interesting case. He is going to be playing in a foreign field and is going to get ripped on a lot, that means he will have to up his already stellar insult game. He will always score points with only the acid in his tongue. BUT he will probably get drafted too early relative to where he actually finishes in the standings at the end of the season.

That's all for now, be sure to check back for our Rookie Preview!