Tea Bagging You With Knowledge
MUSINGS FROM OUR CHEAPSKATE BEER SNOB 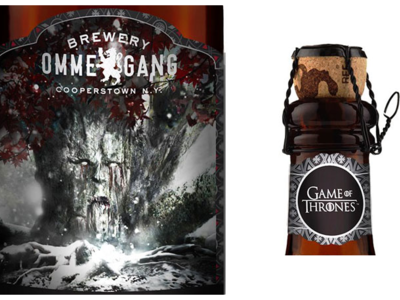 Last year, HBO had a brilliant idea. They reached out to one of the best breweries in New York, Brewery Ommegang, to create a family of limited edition beers that celebrate their series Game of Thrones. Ommegang was an excellent choice for a brewery partner because they use traditional methods from Belgium to create authentic and richly flavorful beers. In addition their label game is always on point. Their logos are simple illustrations with color schemes that give you a hint about the nature of the beer. Their artists created a very detailed illustration that is full of dark shadows and mystery.

Fans of the show might point out that the lords and ladies of Westeros drink wine instead of beer. Therefore, they should start a petition for limited releases of Arbor Gold and Dornish Red wines because I have a feeling those would be a hit too.

The first offering from Game of Thrones was released to great acclaim back in the Spring. I was invited to a release party in Syracuse. While I was there I had the opportunity to speak with a representative from Ommegang and asked about their plans for future releases. She wouldn't give me any details but let me make some guesses. I predicted they would create an imperial stout as dark as the cloaks of the men of the Night's Watch (I didn't say it exactly like that). Lo and behold, I was right on the money: Take the Black Imperial Stout came out in the fall.

Take the Black is very different from Iron Throne Blonde Ale (the previous Game of Thrones inspired beer). Iron Throne is best described as light. It has a crisp start, a light aromatic head, and sits in your stomach without filling you up too much.

Take the Black is a different kind of monster. The experience starts when you pop the cork out of the bottle. You should hear the Game of Thrones opening credits music playing in your head when you do. If you don't hear it, you got a bad bottle and should take it back to be exchanged. If you pour your glass in the dark, you might not notice it filling up because this beer is as black as night. It's black the way Sterling Archer has black and slightly darker black turtlenecks.

Normally you would want to drink Ommegang out of a chalice or snifter style glass. That fancy garbage won't do you one bit of good here though. This is one of the few non-Guinness beers I will allow to be drank out of my Guinness glass. Once you have filled your glass (you have to drink it out of a glass because the bottle is too big, did I say that yet?) You need to take a long smell. The aromatics in this brew are off the charts. Your usual suspects in a stout are all there: chocolate, coffee, and dark roasted malts. In addition, there is a ribbon of licorice winding through the big accents. At first I was worried about how that would affect the flavors but it turns out I got my banties in a bunch over nothing. (Banties are beer panties, they get in a bunch when you worry about how a beer will taste).

Stouts are heavy beers. They fill you up. This stout is like Thanksgiving Dinner. You have to chew each sip for 5 minutes. I’m a big fan of that because you need to take your time and enjoy the beer. If you don’t relish each sip you’re wasting your beer. And this is a limited run (each beverage center only received 5 cases) so you shouldn’t waste it. Winter is Coming. Don’t forget to stock up on Take the Black in the mean time. Also, watch the trailer for Season 4 here.

Smigoversen loves combining Game of Thrones and drinking whenever possible. You can reach him @3BadMen for arguing about next season.