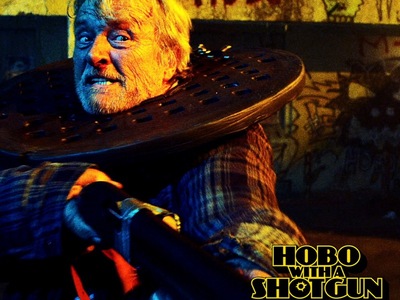 Genres
Rampage
Survival
DUDEFEST RATING
4.25
Dudes
Ricky from Trailer Park Boys
other dudes who exist only in this movie
By Joe Kennedy
March 21, 2014

That’s right gentlemen. We actually watched HOBO WITH A SHOTGUN, the movie that’s based on a trailer for a fake movie. And good thing we did watch it, because now you don’t have to.

The movie starts out promisingly enough. This hobo comes in to town on a train, and then Ricky from Trailer Park Boys shows up, running around with a manhole on his head screaming about how he needs to be freed or he’s going to be killed. All good feelings I had about the movie were instantly erased when the villains were introduced: this weird guy who supposedly is the crime boss that runs the town and his two jackass sons. The guy speaks like he has a literal stick up his ass, and his two sons act like mofos dressed as jocks from an 80s movie and it seems like their lines were pulled from comments found in the bowels of Youtube. The villains kill Ricky from Trailer Park Boys by beheading him in the weirdest way possible, which causes his body to spew blood like a goddamn fire hydrant, and some chick decides to dance in the bloody eruption, ruining her beautiful white coat in the process. Why would she do that? What was she thinking? How is she going to get the blood out of that nice coat? Perhaps it’s bleachable, and for her, bathing in a blood fountain is worth the work of bleaching it. Maybe it was a hand-me-down or something, or an ex gave it to her and the relationship ended poorly. Either way, I truly don’t care.

The movie unfortunately continues as the hobo watches the villains murder a bunch more people for no reason, and then watches one of them try to kidnap a prostitute, but steps in to protect her. Apparently murder is fine, but he draws the line at prostitute kidnap. Go figure. As the movie progresses, the hobo becomes a father figure to the prostitute. Why? I don’t know. Nothing else in the movie makes sense, so just roll with it. The hobo starts cleaning up the town by shooting criminals with a shotgun that he bought with unlimited ammo for 50 bucks. Good deal. Keep in mind that movie’s version of a shotgun is more like a grenade launcher, because each bullet either blows up his targets entire head or causes them to look like that horse from The Walking Dead. There is a butt ton of violence in this movie, but it really seems to emphasize the aftermath of the violence. We at Dudefest.com could give two shits about what a guy looks like after being shot in the face; we just want to watch him get shot in the face. The hobo continues the spree until he manages to kill the main villain and his two dickhead sons, but in the process the prostitute loses a large portion of her arm and the hobo is killed to death via guns.

Again, so little in this movie makes sense, is believable, is intriguing, etc. Characters conveniently disappear from scenes when they’re not needed, the prostitute happens to be a masterful welder and an elegant public speaker, the hobo and the prostitute spend half the movie straight up coated head to toe in blood, and least realistically, the hobo is NOT addicted to drugs. I couldn’t even enjoy the fact that the Hobo kills one of the dumbass brothers by taping his shotgun to the dude’s dick, threatening him for awhile, and then shooting the dude in the dick. The non-Anthony Weiner kind of dick shots are usually epic, or at the very least hysterical. But not in HOBO WITH A SHOTGUN.

R A T I N G S
2.5
Rating this movie is kind of like rating a painting you feel obligated to put on the fridge because your least favorite kid made it. But I will rate it, because it’s part of my job, and because I would never spare my least favorite child’s feelings.
Joe Kennedy
6
This movie's title is perfect. This movie's movie is garbage. I can't say I hated it though, because I was certainly entertained.
Fritz Tamarack
Recent Rampage Reviews

It sounds like you just described Pat Holland's typical weekend.
thebigd
I was not a fan of this movie either. There was blood everywhere all the time.
Jimmy Fraturday