Any Way You Want It That's The Way You Dudefest.com It
MONTY PYTHON'S THE MEANING OF LIFE (1983) 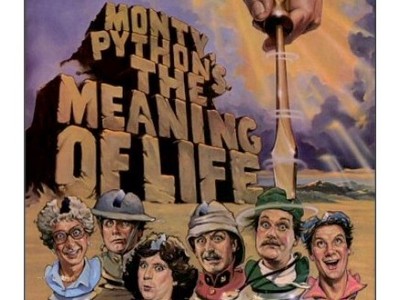 I love Monty Python’s Flying Circus. Without the Pythons, the Beatles, and gin, Great Britain would be worthless in my book. In addition, Monty Python is the most dudefest comedy group of all time for one reason: they play both the men and the women in their movies and TV show. Their trio of films are all fantastic and THE MEANING OF LIFE has the unique distinction of being the only one that did not run out of money in the budget. This is only due to the success of THE HOLY GRAIL and LIFE OF BRIAN.

Both of their previous movies are better than THE MEANING OF LIFE. It has the weakest script of the three. That is not because the writing is substandard, instead the film is a series of loosely connected sketches based around William Shakespeare’s the Seven Stages of Life. That is why Meaning of Life is the most Pythonesque of their films because it most resembles their TV show.

While their show had some of their best sketches, the majority of the sketches here are not as memorable as in in HOLY GRAIL and LIFE OF BRIAN. There is no French Taunter or Spam. However, Eric Idle and Terry Jones knock the songs right out of the fucking park. The best song in their other films soundtracks (Always Look on the Bright Side of Life) wouldn’t even crack the top 5 of classics that appear in THE MEANING OF LIFE.

Other sources of dudefest in the film comes from the presence of a gratuitous amount of boobs, a sketch highlighting the benefits of wearing a condom, a live organ donation, and a speech from the Grim Reaper about why British people suck.

R A T I N G S
7
It’s not my favorite but I’m still a big fan. If you need to study up on astrophysics, you should think about listening to The Galaxy Song over and over again. I haven’t tried it but I studied for a history exam by listening to We Didn’t Start The Fire and that worked out OK. All in all, 7 out of 10.
Smigoversen
6
So I know my dad doesn’t like this movie, but that’s because he doesn’t really like Monty Python. He likes the Spam song from AND NOW FOR SOMETHING COMPLETELY DIFFERENT, but that's because he thinks Spam is funny. Aside from my dad's opinion of the movie, I feel like most dads would like this movie.
Evan Finkle
5
I like Monty Python a lot, I think there is a lot to gain in dudeliness from watching Silly British Sketch Comedy, i.e. how to be an idiot, but smooth it over with humor. However, THE MEANING OF LIFE is not my favorite of theirs. Though, it does have possibly the best death sentence ever, as at the end a man is chased by topless women off a cliff. So, floppy, early-80’s sausage nips give this movie a few points.
Ram Jam
6
This movie taught me that every sperm is sacred.
Henry H. Henry
8.5
Porn title: Mounty Python's The Double-Teaming of Wife
Scrooge
6.5
My favorite part is the beginning with the ship and the office fighting, but that's mostly because it's the only part of the movie I've been allowed to watch.
Joe Kennedy
Recent Comedy Reviews