Only Read It For The Articles
ELYSIUM (2013) 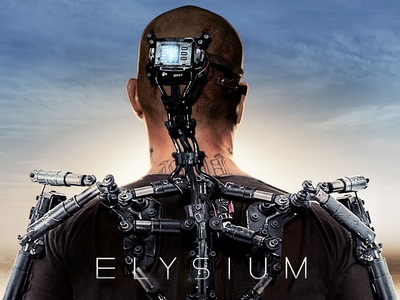 ELYSIUM is the bigger budget version of DISTRICT 9, you know that movie where every talks in an accent you can’t quite place until you look it up later and learn they were in South Africa the whole time.

The world has gone to shit and all the rich people in the world have made their own country on a space station in space. They call the place Elysium and its pretty bad ass up there. They have machines that can heal them better than the ones in Prometheus. A cold hearted bitch is in charge of the whole operation (Jodie Foster), also like in Prometheus. And the best part is, there aren’t any poor people! I mean, wait that’s totally not the best part at all. Poor people aren’t “citizens” of Elysium and can’t get up to the space station.

Cut to a skinhead Matt Damon. A former criminal living in Los Angeles. He is trying to go straight and works in a factory now after serving 5 years in prison. While on the way to work, he gets into a little scrape with a weird battle droid/robocop. This makes him late and his supervisor was kind of a dick about it. To punish him, he tells Matt Damon to climb into a machine after it jams. Somehow the machine turns into a radiation oven and Damon gets stuck inside it when it turns on. Fuck him, right?

Next thing we know, Matt Damon is in a sick bay. A “doctor” tells him that the radiation will consume him in 5 days. In the meantime, they gave him some pills that will make him a normally functioning person until the moment he drops dead.

Needless to say, this doesn’t sit super well with Matt Damon. He wants to go up to Elysium where he can get better. So he goes to talk to his buddy Spider (Wagner Moura). Spider is the reason that Matt went to prison. Spider is also the operator of a two bit illegal space immigration business. He has never successfully landed on Elysium, but that has not stopped him from trying.

Matt Damon convinces Spider to trade a ride up to Elysium for a favor. The favor is Matt Damon has to capture a citizen of Elysium (who coincidentally owns the factory that is directly causing Damon’s death) and take him hostage. In order to accomplish this, Spider gives Matt Damon an exoskeleton that makes him super strong because that’s what the situation calls for.

The heist does not go well. The citizen of Elysium dies and Matt Damon accidentally absorbs all of his memories. In his brain, the citizen had written a program that would reboot the entire Elysium system and let anyone become a citizen.

From this point on the movie becomes a series of heavy handed metaphors for illegal immigration and explosions. Damon makes a run at Elysium while Jodie Foster sends a mercenary hitman after him to recover the information from Matt Damon’s head. At first you think the hitman is French. But he’s actually South African (Sharlto Copley). They fooled me again! Eventually Damon makes it to Elysium by being captured by the Soufrican mercenary. On the way up the aforementioned merks decide to betray Jodie Foster and take over Elysium for themselves.

There’s also a sick kid in there somewhere because Steven Spielberg said all blockbusters need a kid in danger. Lots of things happen. Everything works out. Not everything works out for the best. Eventually Matt Damon downloads his brain and overloads the system and everyone can become a citizen of Elysium.

R A T I N G S
6
I watched this movie with three friends. None of them were awake at the end of the movie. I’m not saying that is proof that the movie wasn’t great. I’m saying it’s proof that the movie was too complicated. Overall 6 out of 10.
Smigoversen
5
Yeah there was money behind this movie, but it was way worse than DISTRICT 9. Some cool exoskeleton shit, but like, fuck that. they couldn't fly. It's no IRON MAN is what I'm trying to say.
Evan Finkle
6
Though entertaining, this movie made me sad. Basically everything sucks in the future. Even the shitty people up in Elysium have shitty politicians and shitty sweater parties and shitty golf courses that has got to be BORING. And there wasn’t enough, you know, oomph, to really bring the story home. The best parts are the cool weapons and the well done robots.
Ram Jam
5
Definitely a movie, and things definitely happened. Matt Damon is supposed to be Inspector Gadget right?
Fritz Tamarack
6.5
I liked it. I thought it was cool that the guy from DISTRICT 9 became a samurai robot at the end. That was the point of the movie, right?
Henry H. Henry
Recent Escape Reviews