Comedy Made In The USofA
RESIDENT EVIL: APOCALYPSE (2004) 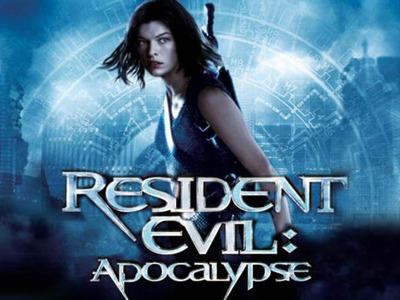 Initially this review was going to be about the first RESIDENT EVIL film. After a few minutes of contemplation, I realized I would much rather write about the significantly more badass and fun sequel: APOCALYPSE. Firstly, I love this franchise. I’ve seen all of the movies in the canon, does RESIDENT EVIL have a canon? I’m going to say they do. I should clarify what I mean by I’ve seen all of the movies in the series, I’ve seen all of the movies. But only on cable. And never in one sitting. These are the kinds of movies that TNT will play for six straight hours and you can come and go as you please throughout without really missing anything. Sometimes they play two or three different ones in a row but I’ll fall asleep at the end of APOCALYPSE and wake up in the middle of EXTINCTION and haven’t noticed. Note: they rarely play the original RESIDENT EVIL movie on TV.

Milla Jovovich plays Alice. That is all I could tell you before taking a close look at her Resident Evil wiki page. The gist of it is that she was one of two survivors from ground zero of the first infection of the T Virus. The evil Umbrella Company has been experimenting on her since then and she is now enhanced. Not in a boobs kind of way, more in the telekinesis and the ability to detect the presence of the t-virus in other people and animals. None of that is important except for the first sentence. Even that’s not hugely important.

Alice awakens to find that Raccoon City (the setting of the first movie) has been completely overrun by the undead. And if that weren’t bad enough, she has these crazy powers she doesn’t fully understand that were the result of unspecified experiments and probably some other unethical stuff from nerd scientists whose test subjects aren’t usually as hot as Alice.

She falls in with some other survivors that include a recently demoted Jill Valentine from the Special Tactics and Rescue Services team (Sienna Guillory), her former team leader at S.T.A.R.S. Carlos (Oded Fehr), and their only hope, Obi Wan Kenobi Dr. Charles Ashford (Jared Harris).

Dr. Ashford’s daughter is lost somewhere in the city and will only help everyone else escape if they find her (dick move). So Alice leads them through an army of the undead with guns blazing the entire time. What the team doesn’t know is that a bioweapon called Nemesis has been tracking them. I’m not going to ruin what happens next but let me just say, there are sequels.

R A T I N G S
7
Would be higher but this movie empowers women. Overall solid zombie movie. The Walking Dead should be taking notes. No need to pay attention, just look up from your phone when you hear the explosions.
Smigoversen
6
I don’t remember too much about this movie, but I’m pretty sure it’s my favorite of the RESIDENT EVILs that I’ve seen. Fun fact, RESIDENT EVIL was originally a video game, and Jill was one of the characters in that too. Who knew, right? Crazy shit.
Henry H. Henry
6.5
Hey, assholes! THESE are zombies. Fuck you guys.
Pete Hall
Recent Escape Reviews