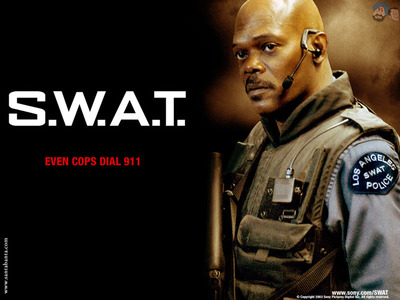 My first impression of the 2003 film S.W.A.T. was that there were way too many characters for them all to make it to the end of the film. I love movies like this because I don’t have to learn any of the characters’ names, I just refer to them as either the actor or the role I know them from. I recognized literally every actor in this movie from somewhere.

I went to the bathroom right before the movie started and when I returned, I was worried I had fallen through a wormhole and missed half of the movie because there was immediate action. It turns out that I had missed a crucial exposition scene that involved a S.W.A.T. team with Colin Farrell and Young Hawkeye losing a civilian hostage during a bank robbery standoff 6 months earlier. Hawkeye was kicked off the force, but Colin Farrell was just given a slap on the wrist and suspended so he could work on his American accent some more.

Flash forward to Sam Jackson giving Farrell a second chance at S.W.A.T. because the city of Los Angeles needs a new S.W.A.T. team. The team is a mix of personalities and characters there is the Way Too Hot to Be a Cop Chick (Michelle Rodriguez), the non-Sam Jackson black guy, LL Cool J (attempting a The Rock to Dwayne Johnson-esque transition by being billed as James Todd Smith aka LL Cool J), the Eye Candy for Ladies on Bad Dates (Colin Farrell), the Stereotypical White Cop (Brian Van Holt), and finally the This Guy Made It To S.W.A.T.? guy (Dan Rydell from Sports Night and probably some other things).

After an invigorating round of Cops vs. Robbers Paintball training in an airplane, the new S.W.A.T. team has been initiated and will start their duties the next day. So of course they go out drinking that night. No better way to prepare for your first day on the job, right? Everyone needs to head home eventually except for Farrell (who is young and unattached) and Michelle (a single Mom who got a sitter for the first time in years). They go out to another bar where they run into Hawkeye (and Radon Randell from Blue Mountain State). Some tough guy banter is exchanged between the former partners. On their way out of the bar you think there is about to be a gratuitous (but very necessary) sex scene. Instead, it cuts to Rodriguez’s daughter’s birthday party where an epic water gun fight is going down. Then S.W.A.T. gets called in.

It turns out that LAPD had arrested a world class criminal named Alex Montel (Olivier Martinez) for a busted taillight or some bullshit. He attempts to escape during prison transfer but is foiled by the S.W.A.T. team. When Montel is returned to prison he announces to the press that he would give $100 million to anyone who busted him out of prison.

Naturally, this is a very enticing proposition to literally every criminal in the greater Los Angeles area. It’s up to Sam Jackson and the S.W.A.T. to protect Montel until he arrives at Federal Prison. Their first plan was to move Montel by helicopter. Obviously this plan is foiled by someone with a sniper rifle in a parking garage shooting the rotor off the helicopter.

Plan B is to move Montel by motorcade. Obviously the plan was also foiled. This time by the largest gathering of 90’s rappers (portraying gangsters) assembled since before the East Coast/West Coast beef began. Jokes on them (and the taxpayers of LA) when the would-be rescuers discover that the car they had killed a lot of police officers over did not have Alex Montel in it. Jokes on the families of the deceased also.

Actually, S.W.A.T. was escorting Montel to a smaller motorcade of two SUVs. SLJ, Michelle, and LL Cool J are in the first car. Behind them are Colin Farrell, Dan Rydell, and Brian Van Holt with the prisoner. Dan and SLJ are maintaining radio contact when all of a sudden the cars are separated and Young Hawkeye and Co. show up again! They shoot Brian Van Holt (confirming my hypothesis there were too many characters) and run off with Montel. It turns out he was in cahoots with Dan Rydell the whole time. This took me completely by surprise at first. Then I remembered there had to be a betrayal at some point, why wouldn’t it be the schmucky looking dude?

The rest of the movie is a very elaborate action sequence that culminates with an airplane landing on a bridge that is closed for construction. Naturally, S.W.A.T. saves the day. But not before I lost interest in the movie and started looking through my TV Guide App. The gist of the finale is this: Dan Rydell commits suicide in front of Sam Jackson, Colin Farrell defeats Hawkeye in what can only be now considered an audition for an upcoming Marvel role, and S.W.A.T. finishes the mission.

R A T I N G S
6
I asked a friend if they saw the movie S.W.A.T. when it came out. They said yes. I asked them to describe the plot to me. I’m embarrassed to admit that his synopsis was much more succinct and helpful than mine. Too bad he doesn’t write for Dudefest and you’re stuck with my review.
Smigoversen
5.5
I saw this movie a while ago, and I remember that is was very ok. You know, one of those movies that wasn’t awful, but I don’t think I’d watch it again. Also, this was Colin Farrell fresh off his notable performance in DAREDEVIL, which is basically the movie equivalent of skunked beer, and I don’t think he won any points back for me in this.
Henry H. Henry
7
I saw this movie in theaters, and it gave my 12 year old self a massive woody. Guns, explosions, and "police"? It really hit the spot at the time.
Fritz Tamarack
6
This is the movie I keep insisting that I've seen, until I remember I've only the trailer. I'm convinced I didn't miss much.
Pete Hall
Recent Heist Reviews