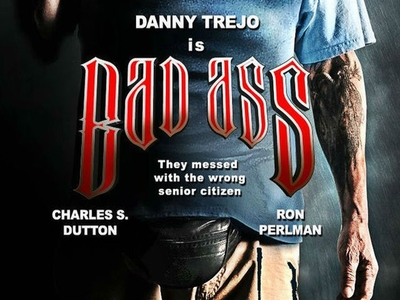 Do you remember that time you saw an old guy beat the snot out of a shit-starting black guy? Have you ever wondered what would happen if Danny Trejo was that old guy? If so, BAD ASS is a film that you should think about seeing.

Danny Trejo plays Frank Vega (no relation to Vincent, who is white) a Vietnam veteran and POW who was told over and over that while businesses appreciated his service for their country, they really preferred to hire draft dodgers who went to college. So instead, he has a hot dog cart that over time has been out competed by trendy food trucks.

There was a really moving sequence where Vega puts on his old uniform, has a good cry, and gets absolutely tanked on El Matador tequila. In the next scene, he’s sitting in the back of a city bus and two skinheads are bothering an elderly black guy. Vega tells them that there are two seats for them in the back of the bus (reverse Rosa Parks alert!). They don’t take kindly to his interruption and he proceeds to (slowly) beat the shit out of them. The fight scenes in the movie remind me of watching an older guy with veteran savvy schooling out of shape former high school stand-outs at the YMCA.

Multiple people filmed the incident (instead of, like, helping him) and the video went viral. He is awarded the honorary title of Bad Ass by the media, people make shirts, other people lied about being present for the ass whooping on their social media pages. We later learn that the two skinheads were kicked out of their white supremacy group and were frequently teased by elderly people because of Vega’s beatdown.

At this point, I took a sip of my beer. When I put the bottle down, Vega’s mother had died and he inherited her house. He moved in and let his friend Klondike move in too. They have a good laugh about his (extensive) pornography collection and have a couple of drinks. When they were roughly two hours after Thanksgiving Dinner drunk, Klondike hands Vega a little envelope and asks him to put it in his safety deposit box before going out for a pack of smokes. On his way back, two thugs (one who looked a lot like Chris Webber but almost definitely wasn’t) stop him and demand they give them the envelope.

Klondike refuses and manages to put both of the thugs on the ground. Klondike was cast by time traveling to the future and bringing back a 70 year old J.B. Smoove. While he was revelling in his victory, the guy who looks like Chris Webber shot him. Vega does not take the death of his (only?) friend very well, and heads to the liquor store for another bottle of El Matador. While he was there, the liquor store got robbed and he beat the snot out of the three robbers (mysteriously armed with only one gun).

The police do not investigate Klondike’s death adequately for Vega. So after making a scene at the liquor store, he decides to take the law into his own hands by literally beating the truth out of anyone who could be involved in the murder. Vega goes all over town (thank you city bus system) to beat up various people that may or may not be involved in Klondike’s murder.

Eventually, he decides to take a look inside the envelope. What could possibly be inside? A flash drive! That makes sense. Too bad Vega is a Vietnam vet and has no idea what a flash drive is. The movie has a running gag where people explain what a flash drive is to Vega (in great detail). His spunky next door neighbor shows him how to take a look at the files and Vega discovers that the biggest gangster in town, Panther, is on the Mayor’s payroll. I’m not sure if this was more important to Vega than Klondike’s murder. Vega decided to give it to a police officer friend of his.

Several more people get their asses kicked until Vega goes to his hideout. The one time Vega fails to incapacitate someone immediately is when Panther knocks him out. Vega wakes up tied to a chair with electrical wires attached to his nipples. Panther instructs Chris Webber to shock Vega until he gives up the location of the flash drive. While he is being shocked, Vega cuts through the rope that is tying his hands behind his back. He springs into action by throwing a lit match on to some chemicals to create a distraction. Vega and Panther get into a fist fight and Panther is able to escape by cutting Vega with a machete (not sure if that was intentional irony).

I should mention at this point that Panther is very fat. This is important for an elderly protagonist because neither of them can run very quickly. The chase culminates in a game of chicken where both Panther and Vega are driving Greyhound buses left over from Pee Wee’s Big Adventure. Vega crashes and Panther escapes (again). Somehow only 70 minutes of movie have gone by.

Another thing I should have mentioned, in the middle of Vega’s rampaging, he swings by home a couple of times and gets to know his attractive neighbor who is the mother of the kid who helped him earlier. (Because of course they shoehorned in a love story.) Panther makes a beeline for her house and the climatic fight takes place outside (again while people are watching/filming instead of helping).

You can tell the exact moment where the effects budget ran out, it’s with 8:45 remaining in the film. When Vega finally defeats Panther, the camera pans down to Panther’s face and he asks for someone to call an “ambalance” (fulfilling the “based on a true story” aspect of the film). Vega is made an honorary police officer (a noticeable step up from honorary Bad Ass) and bangs his neighbor. The police also arrest the corrupt mayor but that’s not really important. I forgot that he was a character three times during the film.

R A T I N G S
9
This is a great Dudefest movie. It is not a great movie. If you’re into old guys landing much younger women while also fist fighting his way through urban youth, this is for you.
Smigoversen
7
Considering the budget of this movie. It's not unreasonable to think this was a fan script. I think Joe Six-pack saw a movie like THE GREEN HORNET and said, “I'm going to write a movie about if I did something good. Lets keep it realistic though, no super powers, I’ll be my real age, like 54, with my real job, but then I go around trying to solve the crime of my murdered friend.”
Evan Finkle
Recent Rampage Reviews