You'll Love The Salty Taste Of Our Comedy
INDEPENDENCE DAY (1996) 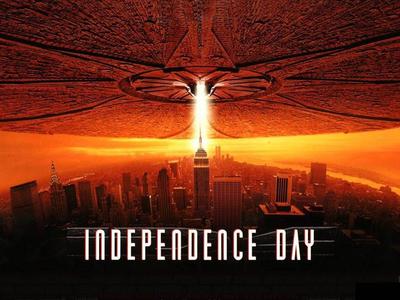 Welcome to Earth! This is INDEPENDENCE DAY. You know, that movie you always see on cable where aliens invade Earth and blow everything up, only to be defeated in the most unlikely of ways by the outmatched humans. No, not TRANSFORMERS, this one came out in the 90s. No, not ARMAGEDDON, that was about an asteroid, not aliens. In fact, without INDEPENDENCE DAY, neither of those movies may have even been made. I know that sounds like points against the movie, but it was actually pretty good as far as I'm concerned. It's success basically restarted Hollywood's obsession with big-budget disaster movies that ruled the early 2000s until movie studios began throwing as much money as humanly possible at superhero movies. INDEPENDENCE DAY also gave us the career of one of the greatest directors of our time, Roland Emmerich. He went on to make 10,000 BC, and 2012 and a new GODZILLA movie in the works. You know, quality stuff.

So this movie has been out since 1996 and has made about 100 billion dollars since then, so chances are you've seen it. You know it's the movie where the aliens blow up New York, Washington, and LA in a very long and carnage-filled scene that gives Michael Bay an unhideable public erection. But you probably haven't seen it in a while, so let me refresh your memory. First, we find Dr. Ian Malcolm (played by Jeff Goldblum), the brilliant mathematician, living in New York City and clearly suffering from post-traumatic stress disorder from his harrowing experience of being attacked by dinosaurs at Jurassic Park. Though he's a genius, he's divorced from his wife (who's boning the President) because he lost his ambition, and his father describes him as a cable repairman, not even a good one. Obviously, his terrible weekend visiting Jurassic Park really fucked this guy up. Anyway, the other main character here is the Fresh Prince of Bel-Air. You know, he was born and raised in West Philadelphia, but some guys started making trouble in his neighborhood and he was sent to live in LA? I think there was a documentary about it a while back. Well the Fresh Prince is a few years older and has been kicked out of Uncle Phil's house for dating a stripper, and he somehow became a fighter pilot for the Marines to pay the bills. He also traded out Carlton with Harry Connick Jr.

Next thing you know, the alien spaceships are invading Earth, everyone freaks the fuck out, and the aliens blow up a bunch cities. The world is in chaos, so Dr. Malcolm goes to the President because he figured out how to beat the aliens. The Fresh Prince joins up with them, and together they take down the aliens in a crazy, action filled plan. Yes, the world is totally destroyed, billions of people probably died, and the entire world economy has crashed, but the people won!

Does this sound awesome? Yes. It didn't win any best picture awards or anything, but it's a fun and action-packed ride. It's got fighting, explosions, aliens, and Will Smiff, so it's got some things going for it.

R A T I N G S
7.5
A bunch of shit blows up, so that's pretty awesome. It's also a pretty enjoyable movie, so I'd recommend it to any dude who wants a fun movie to watch. The President's speech at the end is also pretty damn epic. I do take away points purely because this movie's success influenced the production of some pretty bad movies.
Henry H. Henry
7.5
This one gets a 7.5 for three reasons. Number one. As McLoughlin said, the president’s speech. Holy Jesus. That speech could turn a gay man straight, or a straight man gay. Maybe even there and back. Number two. Will Smith welcomes an alien to earth with a swift punch to the face, which is simply a terrible way to welcome someone to a new planet. Number 3. The aliens use MacIntosh compatible software. As a Mac user, I like that. As a film fan, that makes no sense.
Joe Kennedy
9
The simple fact that Will Smith has a fist fight with an alien and wins is enough for me. It makes me sad that the White House gets destroyed but we win in the end. America, Fuck Yeah.
Jimmy Fraturday
10
We will not go quietly into that good night. This movie should have won every single award for movies. I am literally 100% certain that when (not if) aliens invade, it will be America that stops them. Fuck you, ET.
Pete Hall
6
I think I would like this movie more if Michael Jordan was the star and instead of fighting the aliens, he challenged them to a game of basketball and had the Looney Toons be his teammates. That's a movie I would pay money to go see.
Smigoversen
3
Fell asleep not once, not twice, but three times while watching this movie. It took me four nights in a row to get through it, and there was by no means enough Will Smith in it. Also I hate Lonestar from Spaceballs.
Evan Finkle
Recent Space Reviews