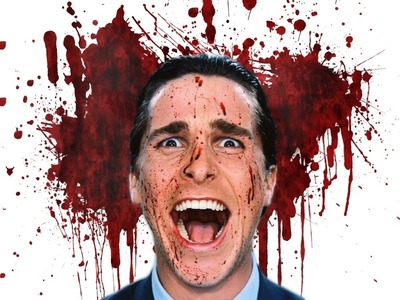 Have you ever wanted to kill someone? Me neither, but you know who does? Patrick Bateman, Christian Bale’s character in this wonderfully twisted, dudefest of a movie. This flick has it all folks: violence, violence, sex, drugs, rock and roll, violence and alcohol. Also violence.

On the 0-10 scale, with 10 being a movie like THE NOTEBOOK, (see: chickflicks) AMERICAN PSYCHO comes in at a resounding -25. Don’t watch this movie with your girlfriend, or that cute girl that you know you have no shot with. I’d suggest something cute like WALL-E for that sort of shit.

Anyway, back to AMERICAN PYSCHO. This is a man’s movie. Our protagonist, Patrick Bateman is an investment banker with a penchant for violent murder. A short list of things he likes to do: murder people, drink heavily, do cocaine, drink more, smoke cigars, look good in a suit, fuck prostitutes, have threesomes with prostitutes, kill prostitutes after threesomes, and finally listen to music. Music actually plays an important part in this movie and if you appreciate some solid 80’s hits this movie might be for you.

Let me set the scene. Bateman and his two prostitutes are elegantly dressed, Phil Collins is playing in the background and Bateman is describing how much he likes this particular Phil Collins song. The CD changes to the next song, “Sussudio”, which all of you need to go out and download immediately. Bateman and his lady friends enter the bedroom where he proceeds to pleasure them both. While this is pretty dudefest by itself the real best part is Bateman is filming the whole thing and also is constantly looking at himself in the mirror and flexing. If you’ve never had sex by a mirror, make that your weekend goal. But before you do, watch AMERICAN PSYCHO so you can impersonate Patrick Bateman. But just in bed. Don’t go around murdering people. That’s bad.

R A T I N G S
10
This movie is so crammed full of dudeliness that it hurts. I could watch this movie over and over. Like once a month. It’s got the right amount of violence, sex, drugs and rock and roll. Plus it's got a hell of an ending.
Jimmy Fraturday
9
Is it weird that maybe I’m jealous of Christian Bale's life?
Evan Finkle
9
Even without the murderous rampaging, Bateman lives a life most men aspire to live: he’s attractive, charming, successful, and ripped, and he seems to work fewer than 40 hours a week, does absolutely nothing when he’s at work, and has a great business card. It’s not the most impressive (Paul Allen’s is), but it’s stellar nonetheless. I believe that the novel that this movie was based on also inspired the GTA series.
Joe Kennedy
7
Has anyone taken a trip off the deep end in saying that this could be contorted into a critique of the 1%, the tight-wound corporate asshole, the faceless greed-monger that it has become common to hate on? Who’s America is Patrick Bateman representing? I think we should start an AMERICAN PYSCHO Series that features Michelle Bachmann, Miley Cyrus and the woman who married Ted Bundy. The original is great, though.
Ram Jam
7
Great tunes in this movie. The protagonist has a winning smile and a je ne sais quoi way with an ax and prostitutes. What's not to like?
Smigoversen
8
Christian Bale as Patrick Bateman represents an especially scary type of insanity. This movie makes a great case for Bale as an awesome Joker.
Pete Hall
9
Christian Bale played the sociopathic murderer thing so well that I'm convinced he wasn't acting.
Henry H. Henry
Recent Thriller Reviews 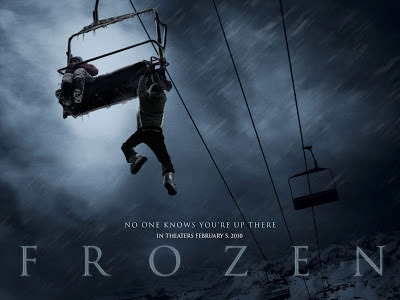