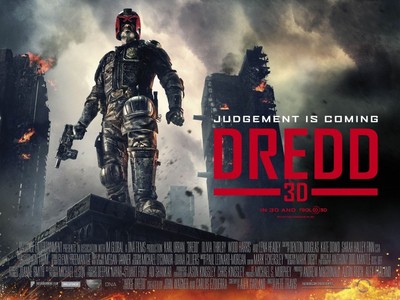 I’ll start off the review by saying that you don’t need to watch the first 20 minutes. I’ll sum it up for you:

Cut to 20 minutes in. Dredd and Anderson do this drug bust in Lannister's huge building, which is five minutes of slowed down bullets moving through faces. Epic. But, at the 30 minute mark, shit gets real. Readers should also note that the previous sentence was, is, and most likely will be the biggest understatement that we at Dudefest will ever say. I can’t stress that enough. Cersei Lannister makes every male moviegoer’s dreams come true in one speech. I will not describe it in any more detail; it is something that must be seen to be believed, like the skiing ostrich.

The last hour of the film seriously challenges Taken in our books. Constant action, no romance, and various futuristic weapons that kill people in, like, eighty different ways. I will not give anything else about this film away. See it now.

Oh, and Anderson passes the test. Dredd says so.

R A T I N G S
10
Dudefest hall of fame movie. Rating assumes first 20 minutes of “explanation” are excluded. Actually, screw it, it would still be a 10 with the first 20 minutes included. They were awesome as hell. Watch them too.
Joe Kennedy
10
I’m trying really hard to think of anything that wasn’t dudefest about this movie, and I’m drawing a blank. Hell, the girl in it was was more badass than most dudes from other action movies. It had everything I could want in a dudefest movie, and nothing I wouldn’t want. It’s just that fucking good. Actually, just stop what you’re doing right now and watch it. I don’t care if you have a dentist appointment now. Watch it. Why are you still reading this? Go now.
Henry H. Henry
9.5
Holy Shit dudes, that was a good movie.
Evan Finkle
9
A very good dudefest film. It really doesn’t try and sell you any storyline, just cool action. Tons of blood, which in and of itself doesn’t make a great movie, but in Dredd just makes it awesomer. I’m glad it was short, because it left me like “the fuck just happened” and “I probably have enough time to watch it again”.
Ram Jam
4
What fucking movie were the rest of you idiots watching?
Pete Hall
7.5
Judge Dredd without Rob Schneider and Sylvester Stallone? That's a tough sell. Urban is a'ight though.
Scrooge
Recent Rampage Reviews