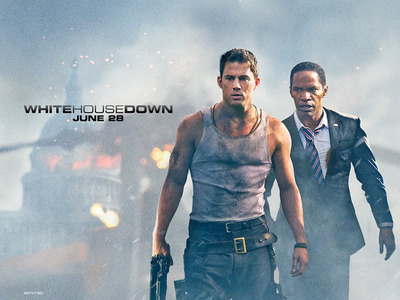 OLYMPUS HAS FALLEN is an incredible, action-packed movie about a secret service agent and the President saving the world as brutal enemies attempt to take over the White House. This movie, starring Channing Tatum as the agent and Jamie Foxx as the President… wait, wait no that’s not right. Sorry, I got confused for a minute. Those are the stars of WHITE HOUSE DOWN, an almost identical movie released only a couple months after OLYMPUS HAS FALLEN. I haven't seen it yet, but after watching OLYMPUS HAS FALLEN, I feel like I have.

Unlike that other White House movie, this one stars Gerard Butler (300 and every subsequent romcom ever) as the agent and Aaron Eckhart as the President. Why the hell does Hollywood think this is a good idea? They have a track record of releasing movies with the exact same plot within months of each other. Armageddon and some other asteroid movie, Dante's Peak and Volcano, A Bugs Life and Antz. They even did it last year with Oblivion and that sci-fi movie with Will Smiff and his shitty kid. They've been doing it for decades. Do they think that we're all collectively stupid enough to notice? Yes they do. Do we still go see both movies? Also yes. We should all be ashamed of ourselves.

Hey, by the way, if you're interested in watching this movie, do me a favor and let go of any sense of reality first. Basic run-through of the plot: North Koreans somehow invade the fucking White House, and nobody in the entire US government or military is able to do anything at all about it. No one, that is, except for disgraced agent Gerard Butler who kills all of the North Koreans and saves the world or something. That alone is pretty fucking unbelievable, and it only gets worse from there. If you're anything like me, you will be screaming at the TV if you watch it with any sort of attachment to reality. Use more than ten brain cells while watching this movie and you'll start bleeding from your ears trying to fathom how the writers came up with this shit. So do yourself a favor and just watch it for the explosions. You'll have fun if you do.

You know who I really feel bad for in this movie? Aaron Eckhart. Poor, poor Aaron Eckhart. After years of fighting the crime bosses of Gotham City, living through the terror of losing his girlfriend and half of his face, and of course the huge psychological toll that entails, he somehow got reconstructive surgery and pulled it together to become the President. Then, he loses his wife (I think her name was Rachael) because his favorite agent Gerard Butler couldn't save her. Then, he gets taken hostage in his own house and every nuke in America almost detonates. He even gets betrayed by one of his closest agents, played by the always douchey Dermot McDermott. Talk about a tough couple of years. I hope he pays his psychologist well. But don't worry too much, because the invincible guy that Butler plays takes the North Koreans down when nobody else could and saves him. All of it is totally unbelievable, but if you like things that blow up then you'll enjoy it.

R A T I N G S
5.5
Stupid as hell, but Gerard Butler gets shit done in this movie. We should've sent him in to catch Bin Laden. He would've been captured in a week. Or if we sent both him and Liam Neeson's character from TAKEN in at the same time. They both seem like the "I don't need a partner" type, but between the two of them I think they could've dismantled Al-Qaeda in a month.
Henry H. Henry
5.5
If you suspend your disbelief long enough to legally be an expulsion, then you’ll enjoy the non-Gerard Butler kicking ass scenes.
Joe Kennedy
8
I'm gonna be bold here and say I kind of dug most of the movie. GREAT stabbings, like into the temple stabbings. Also just the whole secret walls of the White House gave it a whole National Treasure vibe. Thumbs up from the Finkler.
Evan Finkle
Recent Escape Reviews