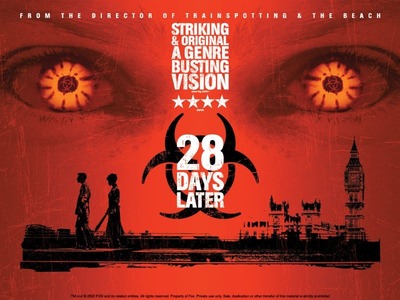 If you thought 27 DRESSES needed just one more dress, then you're going to love 28 DAYS LATER. I personally like to think of it as 27 DRESSES+1. Just replace weddings with disease-ridden superzombies that have red eyes and Katherine Heigl with more disease-ridden superzombies that have red eyes. So yeah, pretty much 27 DRESSES+1. Directed by Danny Boyle, who's the Oscar-winning director of SLUMDOG MILLIONAIRE, this is the zombie movie where you can run, but the zombies will catch you. Seriously, these things don't stop. These aren't your Walking Dead crawlers, these are the zombies that you pray don't actually appear when the metaphorical shit hits the fan. You might even have nightmares about these guys, you know, if you're some sort of pansy.

This movie stars Cillian Murphy, a guy who's pretty far up there on my list of favorite actors. You may know him from INCEPTION and BATMAN BEGINS, but he was also great in THE WIND THAT SHAKES THE BARLEY and SUNSHINE (another Danny Boyle film). So the film really opens with him waking up from a coma in an abandoned hospital (Walking Dead fans know what I'm talking about) 28 Days after some Greenpeace hippie assholes release rage-infected chimps and inadvertinetly trigger armageddon.

Yeah, real good fucking job saving the earth, guys. Anyway, Murphy's character, Jim, walks out of the abandoned hospital to a completely empty London. We see some pretty fucking awesome shots of a barren, desolate London with Jim walking alone through some of the busiest parts of the city. He ultimately wanders unknowingly into a couple of zombies, but he's eventually saved by two Molotov-cocktail throwing real humans named Selena and Guy-who-doesn't-matter (that's how his name appears in the credits, as far as we know).

They quickly catch him up on the shitstorm that is the world right now, and then Guy-who-doesn't-matter tragically gets bitten and is swiftly killed by Selena with a machete. Clearly, these 28 days of hell have battle-hardened her. They continue, meet up with a father and his daughter, and they all decide to head out of London with the hope of reaching a military squad claiming to have the cure. One thing leads to another, and let's just say that it turns out that the zombies aren't the only bad guys. This sends Jim on a total rampage, he fucks shit up, and he saves Selena and the daughter (her name escapes me and I'm too lazy to look it up on Wikipedia. What do you want from me?). The movie ends on a hopeful note, with the three of them living in the country and waiting for rescue. Fun fact, the director originally wanted to kill Jim at the end of the movie, but when he showed it to test audiences, people went so ape shit that the studio execs forced him to reshoot the ending to have him live. Sorry for the spoiler I guess, I just thought it was an interesting fact.

Basically, this is a really solid movie. I'd call it the thinking man's zombie movie, but I think the original DAWN OF THE DEAD already fills this role. I also think 28 DAYS LATER is arguably a pure thriller that just happens to have zombies in it. My point is that whether you want a thoughtful movie or just a fun, violent movie, this one is the way to go. If you haven't seen it and didn't get pissed that I pretty much ruined the ending for you, go see it. Even if you did get pissed, fuck you and go see it. That's it.

R A T I N G S
7
So, verdict. It's pretty awesome. If I were rating this in terms of what I thought about it as a pure movie, I'd probably put it at an 8.5 or 9. As far as how dudefest it is, I'll put it at a 7. It's got a pretty solid rampage, good characters, and zombies, but there is a romance in it and it might be a little slow-paced as far as dudefest goes. Either way, two thumbs up, I love it.
Henry H. Henry
9
For Christ sake, stop calling it a zombie movie. They aren’t zombies. That being said, this shit fucking RULES. Of all of the survivors shown in the entire movie, there are only TWO chicks. And one dude that runs train on all those military doucheholes.
Pete Hall
7
In this ZOMBIE movie, there are a bunch of ZOMBIES and all of them are ZOMBIES. And speaking of ZOMBIES, have you ever seen 28 DAYS LATER? It's a ZOMBIE movie featuring ZOMBIES and I rated it a 7.
Joe Kennedy
7.5
Like ZOMBIELAND if Woody Harrelson was a decent actor and Jesse Eisenberg was a woman. Wait, scratch that, Jesse Eisenberg IS a woman.
Pockets
Recent Post-Apocalypse Reviews