A Top Ten Cause of Luggage Lifting
IRON MANG (2008) 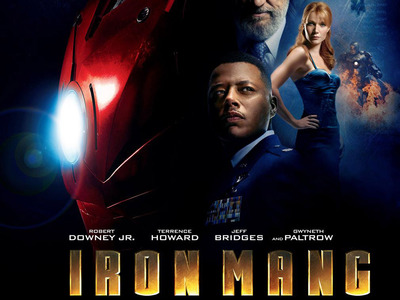 Before we had THE AVENGERS and the CAPTAINS AMERICA, all there was for Marvel geeks to freak out over was IRON MANG. When IRON MANG came out in 2008, it was the only thing everyone was talking about for twenty minutes before it was completely overshadowed by THE DARK KNIGHT. Robert Downey, Jr.’s performance as the man inside the Iron Mang suit, Robert Downey, Jr., managed to stand out despite being the eighth-best film featuring a powered exoskeleton (because who could forget STAR KID?).

The Marvel Cinematic Universe (defined as all of the movies based off Marvel Comics characters, except for the ones that are excluded) almost faced a massive setback known as “The Hulk Sucks”, but managed to ride the popularity of the Movie and Real Life Robert Downeys Jr onto becoming the most valuable film franchise in history. Movie Robert Downey, Jr. is somehow even more of a charming, lovable asshole than Real Life Robert Downey, Jr. In fact, the only way to tell them apart is that one of them has facial hair.

Looking back, it turns out that IRON MANG rules. I mean, I thought that at the time, too, but nobody would listen to me (which has been a recurring problem throughout my life).

Movie Downey is a super genius that inherits his father’s weapons company and works with The Dude (Jeff Bridges, duh). The Dude was Movie Downey’s dad’s best friend, until he decided to become a supervillain for reasons also known as “the script said so”. So The Dude and Movie Downey fight each other in the robot armors they built until the script ends.

Movie Downey, as Iron Mang, fights the following: terrorists in a cave, a bunch of missiles in a cave, terrorists in a village, a bunch of missiles in a village, two US Air Force jets, and then The Dude in a bigger Iron Mang suit. Movie Downey also bangs, like, all of the chicks, but that’s not very different from Real Life Downey.

In doing research for this article, I found that apparently (according to Wikipedia) they spent all their time in pre-production working on the action and planning out the effects, so they just let the actors create their own dialogue. That’s pretty awesome, and it just shows how great Real Life Downey is, that he was able to do such a believable job playing Movie Downey while just saying things that he would say in real life.

I forgot to talk about Colonel Rhodes (Terrence Howard, but only in this one) until right now, but he doesn't even wear his War Machinge suit until the second movie so he's barely even relevant.

R A T I N G S
8.5
IRON MANG is a solid film. I liked watching it with my eyeballs while listening to it with my earballs. There were babes, there were dudes, and there were explosions. It was a dudefest, for sure.
Pete Hall
8.5
Robert Downey, Jr.'s best non-black face role.
Joe Kennedy
8.5
Great film. Downey, Jr. was born to be Iron Man, and it kicked off the whole Marvel movie empire. Also, Terrence Howard is in this. I'm sure we'll see some good things out of him in the IRON MANG sequels.
Henry H. Henry
8.5
This move never gets old, and I will always want an Iron Mang suit of my own. Mostly because I'm embarrassed by my physique and the suit seems to hide that pretty well.
Fritz Tamarack
8
Tron was the bad guy!!!! Fuck that shit. Jeff Bridges, get your shit together, nobody believes you're evil.
Evan Finkle
9
I really enjoyed this movie. Plus huge man crush on RD Jr. Also there are some hot chicks that he gets to have sex with.
Jimmy Fraturday
Recent Superhero Reviews