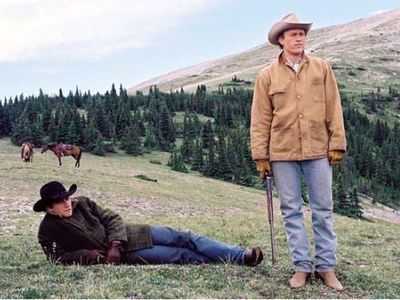 This is the second Jake Gyllenhaal bromance movie we've reviewed, but this one is a bit different. It's a different kind of dudefest. A dudefest of the... ultimate variety, if you will. Ultimate Dudefest, the movie. BROKEBACK MOUNTAIN stars Jake Gyllenhaal as Jack Twist, (no relation to Oliver) and Heath Ledger before the injuries to his cheeks as Ennis Del Mar.

BROKEBACK MOUNTAIN opens with the two dudes, Mac and Dennis Jack and Ennis, briefly meeting each other before taking a two man job to move a bunch of sheep through a mountain or something for the crazy dude from the Chevy Chase vacation movies. After a few days of foreplay spent doing dude stuff, like eatin' beans, shootin' guns, sawin' trees, ridin' horses, herdin' sheep, campin' out, drinkin' whiskey, startin' fires, talkin' about chicks (that's a wash), and pissin' in the woods, Jack and Ennis get super drunk and end up spending the night in the same tent. Usually one of them would spend the night with the sheep, but because of the aforementioned super drunkenness, Ennis is unable to ride out of camp. After Jack makes a pass at him though, Ennis is able to ride IN camp. In other words, ultimate dudefest occurs. In other-er words, they bang. This is both figuratively and literally the climax of the movie.

What's most interesting about this scene is not how natural it looks when you first see it, but how much more there is to it when you truly break it down. As a warning, I'm going to be breaking down an ultimate dudefest scene right here. If you're not into ultimate dudefest, then first of all, why are you on this site? There is no second of all. I learned four huge things about ultimate dudefest from this scene, bringing the total number of things I know about it to five.

1. Dudes do not kiss before plowing.

There is no lip on lip action before Jack and Ennis getting down and dirty. They skip all the bases, and go straight to home, which I guess is like a foul ball that somehow counts as a home run? The baseball analogies don't always work. Besides being every dude's dream (except mine, I love the kissing before the humping, ladies), not kissing before screwing is what I imagine James Bond does, despite how he is portrayed in the movies. Would you like some more dudefest with your ultimate dudefest? Because you just got it.

Jack and Ennis decide without even speaking that Jack will get on all four and Ennis will do the drilling. Actor-wise, obviously Ledger is going to be the top in that situation. However, I assume that the characters are both first-times; although it wasn't stated explicitly in the film, both of them claiming they're not queers seems to imply that was the first time they took part in the most ultimate form of dudefest. But they instantly define their roles and move forward with them.

3. A bit of spit is the only lubrication two dudes need.

Ennis spits in his hand and rubs in on his member (let's describe this as a Red Hot Read) before presumably inserting it into Jack's butthole, forming a dickbutt. Porn is right! You can just spit on your dick and put it in a butt! Note that were this an actual Red Hot Read, there also would have been mention of a condom, and they would have achieved orgasm at the same time. There was no mention of a condom, and the sexing was definitely too short for Jack to have achieved orgasm (I assume), which brings me to the last thing I learned.

The sex scene in BROKEBACK MOUNTAIN is really quick. Like measured in seconds quick. Why? Who knows. Maybe it's something about the ultimateness of the activity that prevents a man from being able to contain himself. Or perhaps the lack of pressure to "make her orgasm too" allows the dude to relax and finish when he wants to. Or maybe Ennis hadn't been with someone in a long and the sexual tension with Jack was overwhelming him, although this last reason seems highly unlikely. Whatever the reason, I've learned that Ultimate Dudefest is so swift that if you blink you might miss it.

After the tent sex scene, other stuff happens. Jack and Ennis have an awesome, dudefest summer together, and once it's over, they have way less awesome, way less dudefest lives. They go their separate ways, Ennis to a different part of Wyoming, and Jack to Texas. They both get married and have to deal with WOMEN (BOOOOO) and CHILDREN (damn, it's hard to boo children), but a few times a year they meet up near Brokeback Mountain for "fishing" trips. Note here that the word "fishing" is actually code for "butt stuff". Clever, gentlemen. Clever.

Throughout their post-Brokeback lives, Jack would rather be with Ennis than with his wife, played by Anne Hathaway, making the exact opposite choice that Batman made. Ennis seems to be the resistant one, not wanting to leave his children even after divorcing his wife. Their lives seem to get worse and worse (it turns out it's a sad movie) as the years go on and their kids get older, until their last meeting, which culminates in Jack dropping the famously cheesy line "I wish I knew how to quit you". Possibly the only poor choice of dialog in the film.

The film wraps up with Jack dying - Ennis imagines his death as a bashing by homophobes - Ennis traveling to meet Jack's parents, and Ennis's eldest daughter (played by the crazy hot crazy chick from American Horror Story) telling him that she's getting married.

R A T I N G S
5
I give the first third of the movie a 15, and the rest a 0. This averages to a 5.
Joe Kennedy
4
Heath Ledger's character is named Ennis. That's only one letter away from penis. Sounds dudefest to me. Too bad the rest of the movie isn't as good...
Smigoversen
Recent Bromance Reviews

CINEMA
THE SHAWSHANK REDEMPTION
Review by Pockets
Angelo E. Hooker
I wish I had a special friend like Ennis in my life.
Scrooge
so dude on dude foreplay is called penultimate dudefest?
Dave Richardson
Yo I boo children all the time.
Jimmy Fraturday

Classic Kennedy, going with an article about Ultimate Dudefest. Looks like Holland and I will have to step it up with more Guydes about hookin' it with chicks
Pete Hall