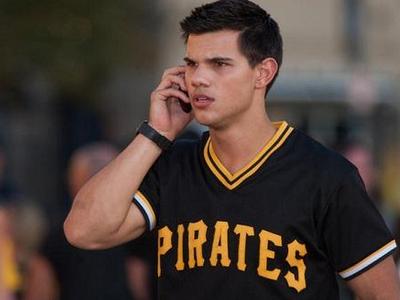 Was your one criticism of the TWILIGHT movies that Taylor Lautner should’ve had more screentime? If it is, then congratulations! You are the only person in the world who will like ABDUCTION, which is one of the most poorly titled movies ever. You would think that with this title, it would be about somebody getting abducted, right? Well, nobody actually gets successfully abducted at all. I think they just wanted a cool sounding action title, but TAKEN had already been taken. As you can tell by this inconsistency, the viewer is in for a rough ride unless they like looking at Lautner’s weird face for an hour and a half.

We start our cinematic journey with Taylor Lautner and his friends driving recklessly through the suburbs on their way to a college party. This is only important because his resulting hangover (he’s only in high school and can’t drink more than two PBRs without puking) is used as an excuse for his father to beat the shit out of him. Don’t worry though, his dad’s actually a good guy. Turns out his “parents” are really secret agents who adopted him for his own protection and his “dad” is just training him to defend himself or something like that. I would say that this would make sense because his “parents” look absolutely nothing like him, but we discover that his real dad is Dermot McDermott, who also doesn’t look like him. Speaking of him, we eventually find out that he stole vital information from a generic Eastern European terrorist, and now they’ve found out where Lautner lives. The bad guys come after him, and Taylor Lautner leads them in a chase around Pittsburgh. Yeah, Pittsburgh. The city you should always think of first when it comes to an intense action movie. I won’t ruin the film for you, but I will say that the climax happens in the middle of a sold-out Pittsburgh Pirates game. If you’re a baseball fan, that right there should tell you how fucking stupid this is. 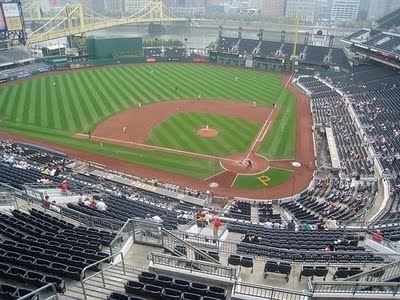 I just can’t believe how bad this kid is at acting. It’s really incredible. I luckily missed the TWILIGHT movies, which are this guy’s claim to fame, so I went into this one only guessing that he wasn’t good. About five minutes into the movie, my suspicions were confirmed. Anybody could do a better job than him. It’s amazing to me that people like him actually get to become famous for acting when there are mediocre high school drama kids that could give this guy lessons on how to act. It ended up being ok though, because his total incompetence made all the moments where he was supposed to show emotion unintentionally hilarious. Watching an actor try to be melodramatic when he doesn’t have the ability to is really funny as long as you forget that he’s making way, way more money than you.

The good thing about Lautner’s acting, though, is that all the other actors are equally bad. I’m guessing this is because they don’t want to hurt his feelings. Something about him looks like he’s prone to crying after the slightest provocation. The villain is funnier than he is intimidating, his right hand man is a fat guy with glasses, and Doc Ock plays a corrupt CIA agent who brings nothing extra to the table. The worst, though, is Sigourney Weaver. You probably know her as one of the most famous actresses of the last thirty years. She might have my vote as the worst phoning-it-in ever in a real movie. I’m pretty sure she read all of her lines for the first time off of some cue cards while filming. This is extra funny because her whole role was to explain to Lautner’s character exactly why he was being chased, which in a better movie would be considered important information, and she doesn’t even know what she’s talking about.

So, like I said, if you like Taylor Lautner for some reason or you’re a Pirates fan that wants to see what their stadium looks like when it’s full, I guess I’d recommend ABDUCTION. If you’re a normal person that really doesn’t give a shit about Lautner, then there’s no way I can recommend it. It’s not a trainwreck, but it’s just so bland and generic that all you accomplish by watching it is getting an hour and a half older.

R A T I N G S
4
Totally boring. Don't waste your time unless you like watching Taylor Lautner struggle with the concept of acting.
Henry H. Henry
4
Not even Taylor Lautner's smokin' bod can make Pittsburgh look like an attractive city.
Joe Kennedy
3.5
I caught the last 20 minutes of this movie on TV, in French. I felt like I still understood everything I needed to, and I definitely enjoyed it more than seeing all of it.
Pete Hall
Recent Revenge Reviews

CINEMA
TRANSFORMERS: AGE OF EXTINCTION
Review by Joe Kennedy
Sue Donem
The 20 minute French version is definitely the way to go
thebigd
My girlfriend made me watch this film when we were in Nashville on a road trip. I don't want to say we broke up because of this movie, but we did.
Jimmy Fraturday