If You're Looking For Cams.com, You've Come To The Wrong Place
STAR WARS: EPISODE I - DENNIS THE PHANTOM MENACE (1999) 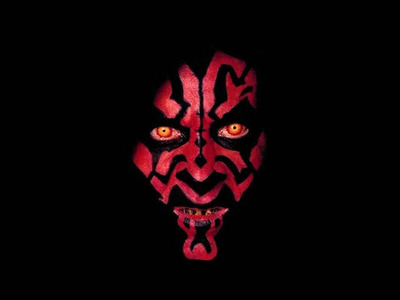 Ahhh yes, EPISODE I. I remember going to the theater to see it like it was just yesterday and not 15 years ago. I was excited, maybe a little nervous and definitely pumped to see my first PG-13 movie (I was 8 years old dickheads). While many STAR WARS fans hate EPISODE I, I really enjoyed it. And SPOILER ALERT: you'd better get your NEPI PEN ready (Liam Neeson Epi Pen for those of you who have forgotten). That's right, Liam Fucking Neeson is in EPISODE I. He plays Qui-Gon Jinn for those of you who couldn't feel his awesomeness radiating out from underneath of all of that hair and beard that he's rocking. Also spoiler alert, he dies at the end, which is rare for Neeson, and is confirmation that he isn't actually playing himself in this movie because the only person who can kill Liam Neeson is Liam Neeson.

So this movie has almost no relation to the original trilogy and features infinitely more special effects and action/ fighting sequences. It also features the most hated character in the STAR WARS universe, Jar-Jar Binks. Jar-Jar is supposed to provide comic relief (I think? I'm really struggling to justify his existence) kind of like how we at Dudefest.com brought Pockets into the picture. Both of them are pretty clumsy, not great at sports, and are homeless.

I think I'm supposed to say something about the plot. Two Jedis are tasked with trying to stop a full on invasion of Naboo. They don't do that. Naboo gets invaded and the capital is taken over by droids. The Jedis and important people from Naboo run away, get their ship all sorts of fucked up and then go on a pretty long side journey to get it all fixed only to eventually return to Naboo. In the meantime they kick it on Tatooine and pick up Anakin Skywalker. In reality his mother just lets a bunch of strangers kidnap her son, but I guess that is neither here nor there.

Really the best part of the movie is that John Williams did the score so the epic music throughout the film should cause all of the blood in your body to rush towards your penis. Make sure you watch this movie either sitting or lying down or you might pass out. So the Gungans (Jar-Jar's crew) team up with the Naboo people and fight the Droid army to stage a distraction while all of the important people sneak around the Capital and try to capture the ultra-bad guys, Viceroys. This leads to Obi-Wan and Qui-Gon fighting Darth Maul in what I think is one of the best lightsaber fights of all time. Qui-Gon dies, Obi-Wan avenges him by slicing Darth Maul in half and meanwhile Anakin somehow destroys the lead ship, killing all of the droids, and effectively winning the battle.

Really the most important part of the movie is that Natalie Portman is in it and looks super hot when she isn't covered head to toe in make up and weird clothing. Trust us Natalie...less is more with you. Also to all the haters...this was the highest grossing Star Wars movie out of all of them. So suck it bitches, and quick your whining about how "the original trilogy is just, like, OMG so much better than the new movies."

R A T I N G S
8.5
Seeing a PG-13 movie when I was 8? Winner winner chicken dinner
Jimmy Fraturday
1
I hate you, Fraturday. 8.5? EIGHT POINT FIVE!? This is why you're the biggest asshole on the site. Fuck you and this shitty movie.
Pete Hall
2
I bet that there are no Jedis anymore because penicillin has largely eradicated the force.
Joe Kennedy
2
Despite the hate he gets, Jar-Jar teaches us a valuable lesson—by dumb luck, incompetent people find their way into better jobs than yours. The only cure to your anger is alcohol.
Henry H. Henry
Recent Adventure Reviews

This movie is rated PG you big dumb idiot.
thebigd
I'd give it a two, because there are two things I like about this movie. The pod racing and the lightsaber battle.
Dudefest Movies
10 MOST DUDEFEST MOVIES