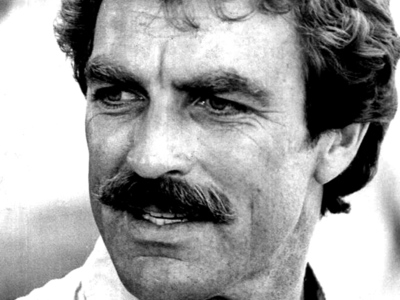 Men, this article about Tom Selleck and his many contributions to Dudefest History has been under construction since before Dudefest.com was even launched. About four months ago, I submitted the article's first draft, which our editor, Smigoversen, instantly rejected because the article contained exactly three distinct words: "Tom", "Selleck", and "Mustache". He added various notes to his edit, like "this is not an article", "you are seriously dumber than a child", and "why are we even letting you write for this site" in the most angry, hurtful email I have ever received. Despite my persistence, everyone else vetoed the article, with the exception of Koella, our resident mustache.

My determination was undeterred, however. Accepting my fate, I conceded that I needed to undertake a complete rewrite of the article in order to get it on the site. I combed through it sentence by sentence, gradually and painstakingly replacing most of the instances of those three words with other, less important words. Just over three months later, I found myself with a version of this article that I was finally ready to re-submit to Smigoversen, whose sole comment was that it was "too pornographic". After I removed all instances of the word "ride", he signed off on it. So, without further ado, here's an article, four months in the making, encapsulating Tom Selleck and his contributions to Dudefest History.

Tom Selleck was born on January 29, 1945 (why wasn't his dad fighting Nazis in '44?) in Detroit, and is notable as being the only famous person born in Detroit that year who was not involved with Motown Records. He played Division I basketball for the University of Southern California, known to acronymists as USC, because yes, he was awesome at sports too. Instead of going pro at b-ball, like Dudefest.com believes he could have, he decided his mustache was best suited for acting.

After years of doing things irrelevant to this article, Tom Selleck starred in the 1979 Wild Wild Western (copyright Will Smith) movie THE SACKETTS with Sam Elliot, which is the mustache equivalent of Jet Li and Bruce Lee co-starring in a kung-fu movie. The same year, Selleck and his mustache were cast as the titular character in Magnum, P.I., named P.I. Magnum (Editor's note: His name was Thomas Magnum, you need to stop drinking and writing), a private investigator living in Hawaii who had a mustache, drove a Ferrari, always carried a pistol, and had a penis so large that Trojan created a whole new size of condom specifically for him. Selleck played this role from 1980 to 1988, during which he also starred in a slew of cowboy movies. 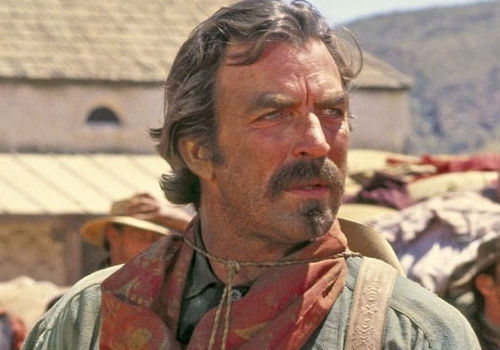 To play P.I. Magnum, Selleck had to pass on the role of Indiana Jones, a decision that scholars refer to as "unfortunate". Now, none of the dudes at Dudefest.com, myself included, have ever seen Magnum, P.I. (we're young and hip), but we assume it was awesome, mustache-wise at the very least, and thus probably better than Indiana Jones. Screw you scholars. In the late 1980's, Selleck also turned down the role of "the dude in Baywatch", which eventually went to David Hasselhoff, most likely because Selleck refused to eat a cheeseburger while lying on the floor drunk. A mustache like Selleck's would never sink that low.

The 90's brought the end of Magnum, P.I., but opened other doors for Selleck. He hosted a special series called The Practical Guide to the Universe, in which he talked about space and shit in space, like planets, stars, and galaxies. Awesome. He later was cast as the mustached older boyfriend of Monica Cox (or was it Courtney Geller?) in the TV show Friends, which brought him to the attention of a wider 90's audience, and also meant that he got to tap one of the chicks from Friends. Even more awesome. 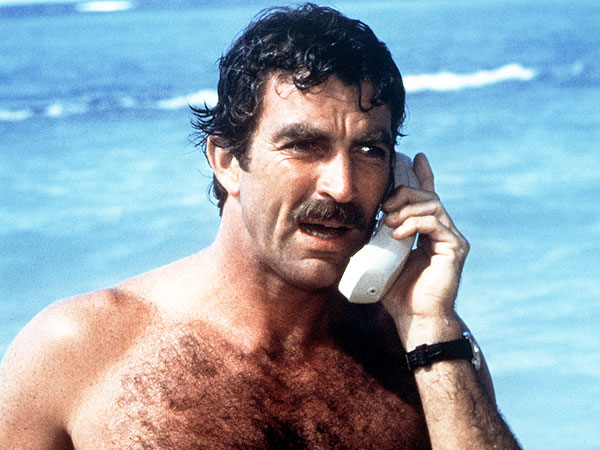 Hello. Yes this is Mustache.

Since the year 2000, Selleck has starred as Jesse Stone in the JESSE STONE film series (essentially like The Rock's movie WALKING TALL except seven more of them), was cast as A.J. Cooper, a casino owner, in Las Vegas, replacing the legendary James Caan, shaved his mustache to play Dwight D. Eisenhower in IKE: COUNTDOWN TO D-DAY, and currently stars in the show Blue Bloods as the New York City Police Commissioner, Jim Gordon Frank Reagan.

The personal life section of Selleck's Wikipedia page reads the way an Art of Manliness article entitled "How To Live Like A Man" would. Selleck is a notable firearms collector and marksman (read: dudefest and being good at dudefest), lives on and runs his own farm, and has a summer residence in Maine. In addition to having been a Division I basketball player, he was an accomplished volleyballer, playing the outside hitter position, known to non-fans as "the dudes who spikes it". He's a big hockey fan and was once a minority owner of the Baltimore Orioles. He has a daughter, who is welcome to go out for drinks with me at any time. He also is a member of the NRA, and became their unofficial spokesman after Charlton Heston stepped down in 2003. And his mustache. That sweet, sweet mustache.

I know it says that "Joe Kennedy" wrote this article, but I'm still a believer that it was another installment of Matt Stoke Mancrush Monday.
Dudes