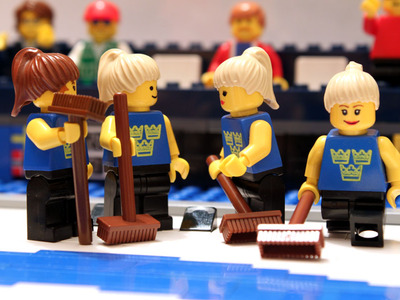 Are you sitting in front of the TV? I told you already, the Other Olympics are on and you've got to be watching this shit 24/7 the whole month. If you've been following my advice so far, you should be drunk already, not going to work this month, and waiting for my new advice. Today I'm going through curling and biathlon, two wildcard events that don't really fit into any other categories.

Curling, our first sport today, is known by some people as "Ice Chess." I've never met any of these people, but if I did I would tell them that Ice Chess is just chess you play with ice pieces and they shouldn't steal it's thunder when they already have a perfectly mediocre name. I mean, really, curling? Why is that the name of this sport? I can't think of a single reason to call it that*. Maybe if the goal was all about trying to bicep curl the most weight, but it's not. The real sport of curling involves sliding a big ass rock across the ice towards a target, and your teammates sweep the ice in front of it to guide it. Only in the Winter Olympics could sweeping be considered a goddamn sport.

Curling's one of those sports that you pops up every once every four years and is promptly forgotten after the games. Which makes you wonder how this game was invented. Now I don't claim to be an expert, but I watched curling a couple of times during the last (Winter) Olympics so I feel like I earned the right to criticize it. My problem with this sport is that it doesn't serve as a true feat of strength. A better idea for would be to throw the rock instead of sliding it, seeing who can make a new hole in the ice that's the farthest away. It would be like shotput, but throwing it on the ice adds an element of irresponsible danger that I think the crowd would really respond to. Who knows, maybe during this hypothetical game a true US patriot athlete would "slip" and hurl it towards team Vodka-Drinkers. Whoever said the Cold War was over clearly never thought we'd ever have to travel to Russia to show our superiority.

I petitioned the Olympic Committee and the world curling organization or whatever it's actually called to revise the sport based on my reasonable suggestions, but I haven't seen too much progress. That means you'll be forced to watch the version with the brooms. Fear not, though, because it can be exciting and dangerous. I once read that 23% of professional curlers perish in on the ice from unfortunate sweeping accidents before they can retire. It's like why people watch NASCAR, to see epic crashes (having never seen NASCAR I can only assume this happens at least once every race). If you feel so inclined, incorporate some alcohol consumption into your viewing experience to both maximize your entertainment and minimize any guilty feelings of skipping work. I don't think I have to remind you that your alcohol choices here should be from a pro-democracy and pro-happiness nation. Maybe find some US-bottled Whiskey, since the burn in your throat from it will balance out the crippling Russian cold that the athletes have to endure. Every time someone slides a rock into another rock on the target, yell SWEEP and take a shot. Like hockey, curling is one of those sports that goes on pretty much every day, so stock up.

Another weird as hell sport they threw into these games is the biathlon. For those of you who don't know about it, the biathlon is basically cross-country skiing where you also have to shoot targets with a rifle. Yeah, that's right, they shoot things. The combination of endurance and guns automatically makes this a dudefest event, so you owe it to yourself to watch all of it. I'm sure the races aren't too long, but I just want to look it up… uh huh… so I'm seeing one of them is 20 km long. Since this is America, I'll convert it to a better distance. By my calculations 20 km is roughly 59.3 miles, also known as two marathons in length. I assume that’s how they get the name "biathlon." That's a long time to be watching a single race. If you feel up to it, maybe try going in to work for an hour or two. I'm sure you can smooth things over boss. It didn't work? Yeah, didn't work for me either. I'm sure it's fine, your boss just needs a few days to think it over and cool down after you told him or her to fuck off. In time, your workplace superiors will understand that this isn't about your laziness, it's about your patriotism. By the end of the month you'll be back, trust me. Maybe even with a promotion and raise. In the meantime, might as well turn this race back on.

Now I know this will come as a shock to you, but the U.S. has NEVER won a medal in any Olympic biathlon race, so we're trying to create the classic underdog story. That means it's going to take a team effort to win, and that team is America. You're a part of it, so step up to the plate. If you're anything like me, you'll be doing your own biathlon in solidarity. Our biathlon involves sitting and drinking. Don't even sit in a chair, sit your ass on the ground. They're not comfortable, and you won't be either. Don't get up to pee either, you can do that right where you are. The only time you can get up is when they start shooting, because you typically have to stand to shotgun a beer. For every shot that they take in the race, I will be shotgunning one beer. This is important, because not only will finishing be an accomplishment, but I won't remember any of the pain of the race. I certainly won't remember the anxiety of leaving my job.

*So a quick search of the internets says that it's called curling because the players try to "curl" the rocks into the target. That's fucking stupid. Players try to hit home runs in baseball, but it's not called "Home Running." Fuck curling.

Henry Henry is on his lunch break and should be back in five to ten minutes.