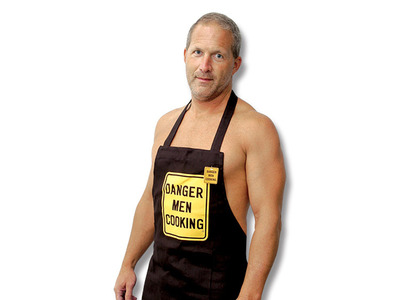 So, we aren't referring to pasta and Ragu here (though that meal is an important staple in the dudely diet). Fraturday telling a story about how he and his roomates ate only peanut butter, cardboard, and mustard sandwiches ("And Captain Morgan Tampon Suppositories!") for a week is also not a part of the Dudefest Kitchen.

We're looking at food with three things in mind:

Cost. I mean, you could just eat awesome shit everyday if you could pay for it. Overpaying because you don't want to just do shit yourself gets old.

Time. We're busy dudes and we dont get paid for cooking. Well, most of us don't.

Nutrients. Dont worry, we're not vegans or anything (sorry). Not eating like shit all the time is good for you.

When you want to go a little above the norm in food preparation—maybe to impress a lady, maybe to prove something to yourself, maybe to exert alpha-male dominance in the kitchen and peeing everywhere just wont cut it—just listen to your fellow dudes at Dudefest.com.

Let's start off with some basics:

Grains. Don't go out and buy Quinoa. It's expensive, kinda lame, and it's fucking over a ton of people in Peru or wherever. Stick to rice and pasta. These two grains are easy to cook, cheap as hell, and allow for you to pile tons of other shit on top of them. Oh, and get brown rice, you pussy. Whole grain pasta is expensive, but brown rice is the same shit as white rice, just better. And once you pile gobs of sauce or stir fry on that rice, who the fuck cares what color it is?

Veggies. Yes, veggies, but also greens. Vegetables add a lot in terms of nutrients, and fresh ones are always cheap. Canned and frozen vegetables are even easier, and aren't that much less nutritious. We recommend peppers (red are better than green), onions, broccoli, and carrots. The usual stuff. Greens, like spinach or kale are basically the superheros of the food world: they are high in many important vitamins, like your A's and C's. Fuck, if Popeye was hopped up on spinach, we should be too.

Protein. Eggs are great. Milk is awesome, just ask Kennedy. Beans are also good for protein, fecal lubrication, and come in cans! Oh, yeah, and meat. MEAT, well regarded as the most dudefest food. Beef, chicken, pork, and fish are all easily attainable. Some meats, like ground beef or chicken breast, are way easier to cook than others, like fish or steak. The latter two take some finess, but are not totally out of the question. Oh, and stop buying 70% lean ground beef, you shit head. Get at least 85%. Because we're your mom, your doctor, and your future children rolled into one omnipresent entity.

Check back for recipes and other tips on how to become a pro in your Dudefest Kitchen.

Koella drives a weinermobile to work. Drop him a line and he might stop by.

OPINION
Vending Machines Are The Most Out-Dated Technology
Joe Kennedy
Scrooge
This "food science" is malarkey. CC Sabathia was at his career best when he was eating two jumbo boxes of Honey Nut Cheerios a day. I dare you to call that dude a "not-dude."
Jimmy Fraturday

So wait, I'm lost. I went out and bought all this food, now what do I do with all of it Koella?
Guydes