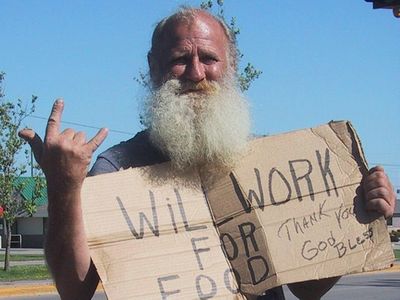 Without a doubt, the biggest question any young adult has is how they are going to continue paying for booze once their time in college is over. Well, you've got three options here. One, you could move back in with your parents and live as a more shameful and embarrassing version of your childhood self. Two, you could resort to a life of crime and steal your liquor. Three, you could man up and get a real job. I'll be talking about the third option today.

Now I know what you're thinking. Getting a job is easy, right? I mean, how hard could it be? I know some huge idiots that have jobs. Good jobs, too. If they got them, how hard can it be? All you have to do is prove to a complete stranger that you're better than the 200 other people applying with better resumes, possibly by shamefully resorting to sexual favors. Sorry to burst your bubble, but it's hard.

According to the US Census, 50% of people ages 21-33.5 are unemployed. Basically, there aren't that many jobs and a shit load of people looking for them. I hope you spent college getting a good degree instead of drinking and fucking. And by good degree, I mean something that you had to use math to get. Nobody's getting a job with a political science degree. I should know, I majored in political science. So, with this in mind, let's talk about how you'll be getting a job. For those who majored in something shitty like me, take my advice and go even more extreme with it. In such a time of uncertainty, my approach is a fail-safe way to become employed.

Sadly, getting interviews and job offers today has less to do with your talents and more to do with who you know. For this reason, people often network with others to find ways to further their own lives. It makes sense, because people generally like candidates that they know more than total strangers. After all, a stranger could turn out to be a total lunatic, and people usually figure an acquaintance is less likely to be totally nuts. Of course, this is assuming that acquaintance hasn't already shown themselves to be insane. So rule number one: always mask your insanity. Remember this rule, it will serve you well throughout life as you try to keep a job, start a family, and stay out of prison.

When beginning the process of networking, the best strategy is to go with the basics. Find a phone book, you probably have one sitting around somewhere from that time you tried to rip it in half. Flip it open to the first page. It probably starts with some asshole named Allen Aaronson or something. Anyway, go through the list, calling every single person and asking what they do. If they don’t answer or hang up, call again. Persistence is the key to getting a job. If their job isn’t related to what you want to do, make fun of them and hang up. If it is, kindly ask to set up an informational interview. When they say no, start demanding one. They’ll give in eventually.

Whenever you go to a networking event or an interview, it's important to look like someone the interviewer would want to hire. Interviewers generally like cleanliness and a presentable outfit, as it says that you take this seriously and want to impress. However, the often-overlooked factor that interviewers look for is confidence. You want your clothing, as well as your attitude, to exude confidence as if it's flowing from your pores. Actually, sweat flows from your pores, so that's pretty much the opposite of what you want. But you get what I mean. To achieve maximum levels of confidence, wear your favorite clothes to the interview. It's an old human resources secret, but even if your clothes are dirty, interviewers will be so captivated by your aura of self-assurance that they will forget all about your clothes. So if you feel most comfortable wearing cargo shorts and a basketball jersey, wear that. Hell, I got offered jobs after interviewing in long underwear and no shirt. I did wear a cape though, which I suggest all of you do too. It adds to that image of coolness and authority that you're trying to push.

Oh, and a side note about confidence- if you get nervous before interviews, try drinking three five-hour energies and chasing them with a double-shot of tequila. This will give you the energy and confidence you need to perform well.

This is the least important part. Most people don’t know this, but the questions that are asked in interviews do not actually weigh into the decisions of the person conducting it. They just care about whether you’re a cool guy. To build up your persona, don’t prepare any answers to possible questions. Instead, lean back in your chair and say cool things like “I drink Bud Light Lime” or “I own one fedora for every day of the week.” They don’t want to hire a nerd, and this will make them think you’re a fun, chill party-guy that’ll make the office a better place to be.

After the questions are all done, the most important part of the interview arrives. Just when you think you’re done, the interviewer will hold out his or her hand for the handshake. This is, without a doubt, the most important part of the whole process. Interviewers are highly trained individuals, and by actually touching you, they gather a whole lot of information. Your pulse, how sweaty or cold your hands are, and how firm the shake itself is.

Now, there’s no perfect handshake that will win you the job. If there was, everyone would be doing it. If you think you need an extra bump to show what a strong candidate you are, though, take the “strong” approach. This handshake has a 78% success rate, which is pretty good. Here, you want to stand up and aggressively reach out for that extended hand. Grab the forearm of the interviewer and pull them close, making sure to hold eye contact, and whisper “It has been an honor.” This feeling of camaraderie, as if the two of you are the sole survivors of a gruesome, week-long battle of epic proportions, will resonate heavily with the interviewer.

After any networking meeting or interview you have, a nice touch is sending a thank you note afterwards. A hand-written, thoughtful note shows the recipient that you go the extra mile, you are courteous, and you are respectful, and it also keeps you in their mind for longer. All these things can help set you apart from all those other assholes fighting for the same position as you are. Make sure to explicitly remind the recipient that in your note. Also let them know that you're very dedicated and you would do anything to get the job. If they have kids, it's totally fine to mention that you think they're wonderful and that it would be awful if anything bad were to ever happen to them. This lets the reader know that you not only care about the job, but about the families of your future coworkers too. Finally, let them know that you can't wait to see them again, and that you'll be sure to find them since you know where they work. To add a more personal touch to the letter, you can enhance the visuals by using letters clipped out of different magazines, or even use your own blood as ink. This will really get the reader's attention and you'll be sure to get a response.

So, you’re welcome. Go out there and get that dream job you wanted, and try out my method if you think you need some help. If this worked for you, make sure to comment below and show future readers that it really does work.

Henry Henry is unemployed and currently looking for jobs. If you have any work for him, he can be found in a tent underneath the freeway off exit 21.