My Name Is Inigo Montoya. You Killed My Father. Prepare To Die... Laughing!
DUDEFEST DUDES' DUDEFEST DUDE OF THE WEEK 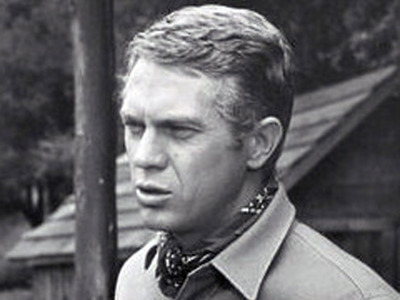 Steve McQueen was a man. He was a man's man. A man's man's man. Some would even call him a dude's dude. He was known for his roles in BULLITT, THE MAGNIFICENT SEVEN, and dudefest favorite THE GREAT ESCAPE. In fact, he's such a dude's dude that the about half of the review of THE GREAT ESCAPE is just about how goddamn manly Steve McQueen is. But there is more to the man who was born Terence Steven McQueen than just motorcycle races. I mean, there are a lot of motorcycle races, for sure, but there's other stuff too.

Notably, he was kind of an asshole to directors and producers on set. He was kind of the Edward Norton of the '60s and '70s: unbearable to work with but immensely popular (and very, very rich). Directors had to just deal with his shit, because having that beautiful mug on your poster would essentially guarantee they could retire to Tora Bora and only have to interact with the classiest of hookers. Producers just threw money at the guy, because audiences just threw money at the producers to see the guy, and everyone got rich.

McQueen's father was a stunt pilot who met his mother, hit it, and then immediately quit it. So obviously the adrenaline junkie-douchebag gene is like the mutant gene from X-Men and it's passed on by the father.

McQueen had a pretty troubled childhood: after his father left, he spent much of his younger years living with his grandparents and great-uncle on a farm, which he very much enjoyed. When he was eight, he moved back in with his mother and his very abusive stepfather, which caused him to leave home at only nine years old. He took to living on the street and running a street gang, bouncing around between his great-uncle's farm, his mother's and stepfather's house, the streets, and even a circus.

After an arrest for stealing hubcaps (either they used to be worth money, or he was just a committed prankster), McQueen got into another violent altercation with his stepfather, which ended with McQueen being thrown down the stairs and saying to his stepfather, "You lay your stinkin' hands on me again and I swear, I'll kill ya." After the incident, McQueen was sent to the California Junior Boys Republic, essentially a "juvie" program for troubled teenagers, to avoid sending them to prison with the hard motherfuckers.

The program worked, and McQueen started to mature, and left his life of crime. He would go on to say the Republic was successful in its goal of maturing him and preventing him from becoming a hardened criminal, and after he got famous he went back to talk to the boys there on a regular basis, responding personally to every single letter sent to him from the boys in the program. Upon leaving the program at 16, he joined the Merchant Marine on a ship heading for the Dominican Republic, but immediately left his post and got a job as a towel boy at a brothel. That was the most dudefest of the manly jobs he would subsequently hold, which notably included lumberjack and oil rigger.

Because neither folding towels in a harem nor chopping down trees were manly enough for the "King of Cool", he joined the Marines in 1947. He got off to a great start by immediately reverting to his prior rebellious douchebag nature, and getting demoted seven times, but eventually shaped the hell up (but not before staying with a girlfriend for two weeks on only a weekend shore pass, which ended up with him resisting arrest and spending 41 days in the brig) and finally embracing the discipline of the fucking Marines.

McQueen used his G.I. Bill to study acting, and after a few minor television and theatre roles, he made his Broaday debut in 1955 in some play I've never heard of and don't care enough to read about on Wikipedia. This ain't a fuckin' academic paper, do your own goddamn research if you're so curious. While studying in New York, he also competed in motorcycle races on the weekends, started kicking a bunch of ass, and bought a shit-load of motorcycles. He moved out to Hollywood in 1955, and some agent decided McQueen should be in B-movies. So he acted in a bunch of them, and then got a starring role in a TV Western, Wanted: Dead or Alive (not starring Bon Jovi) because he was on an episode of Trackdown with an old racing buddy from New York. That launched his career into movies, beginning with NEVER SO FEW alongside Frank Sinatra, and THE MAGNIFICENT SEVEN and THE GREAT ESCAPE followed. His film career skyrocketed, and in 1974 he became the highest paid movie star in the planet, and then promptly stayed away from movies altogether for 4 years.

In 1978, McQueen developed a persistent cough that was found to be due to asbestos exposure. He quit smoking and pursued treatment, eventually traveling to Mexico in 1980 when doctors in the US told him there was nothing they could do for him. He paid for his unconventional and pseudo-medical treatments in Mexico with cash, out of pocket, that he earned from acting. Some reports say this cost him around $40,000 per month. McQueen returned to the US after three months, and his quack doctor announced that McQueen would be cured and return to a normal life. In October of 1980, McQueen flew to Ciudad Juarez, Mexico to have surgery (that he was advised against by his US doctors due to the strain it would place on his heart) to remove the many large tumors he had developed. He died in November of 1980, in Mexico, after the procedures.

McQueen's dudetastic legacy lives on in the memorable roles he left behind and in the fact that it took about 30 tumors to kill the guy. That motherfucker lived so hard that he didn't even die the way his doctors wanted him to.

Four score and seven years ago, Pat Holland brought forth on this internet a new website, conceived in comedy, and dedicated to the proposition that all dick jokes are created hilarious.